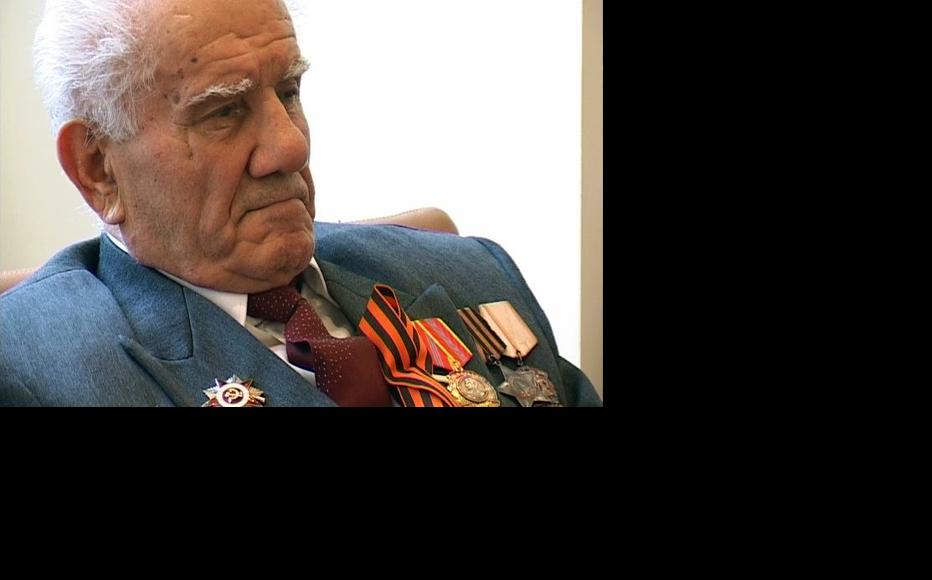 Zhora Tunyan, chairman of Arabkir, a veterans’ organisation in Armenia, says schoolchildren should learn more about soldiers’ sacrifices. (Photo: Karine Asatryan)
The link has been copied

War veterans mark 65 years since the Soviet victory over Germany this May 9, but in the three republics of the South Caucasus, they feel their role has been forgotten.

Every year, hundreds of veterans die and the survivors are beginning to feel that they may never experience the bounteous future they were promised for making the Soviet Union safe.

Kamal Aslanov, 85, was called up from his home in Azerbaijan in January 1942 at one of the bleakest times for the Soviet cause.

“We were sent to Taganrog, and from there we walked for two days to Mintopol. I was injured there and spent four months in the hospital, and then went back to the front,” he said.

Some 600,000 people from Azerbaijan took up arms against the invading German forces - less than half returned alive.

Aslanov is one of the 5,552 Azeri veterans still living at the end of last year – a number that had fallen by 1,302 since 2008, and has doubtless fallen further since January.

“We already don’t talk about the war much. To be precise, we don’t often talk about those difficult days. When we veterans get together we mainly talk about our domestic problems, since for all of us they’re identical,” he said.

“There is not only not enough money for a decent life, but there isn’t even enough for medicine. We are all over 80, and we’re all ill.”

With the other 11 members of his family, Aslanov lives in a two-room flat in Baku.

“We have lived in this flat since 1956,” he said, gesturing around. “In this time a family of two has risen to a family of 12. I have to sleep in the corridor. Where haven’t I appealed with requests for an improvement in our living conditions?

“They promise everything, but there’s still not a new flat. It will be time for me to die soon, and then how will they fulfil their promises?”

Such complaints are common among the thousands of World War Two veterans still alive in Georgia, Armenia, and Azerbaijan. In communist times, the victory in what people called the Great Patriotic War was seen as the country’s greatest triumph and veterans were feted at giant annual parties, and enjoyed privileged conditions in recognition of their role in saving the state.

Since the end of the Soviet Union, however, the three South Caucasus republics’ economies have collapsed, leaving them unable to sustain the expensive benefits given by the communist government.

All three countries have fought other wars since 1991: Georgia in Abkhazia and South Ossetia, as well as against Russia in 2008, while Armenia and Azerbaijan battled each other over Nagorny Karabakh.

That left the governments to support a greatly enlarged pool of veterans and refugees, with less money to do so.

The Azeri veterans’ right to subsidised utilities, transport and more were cancelled in 2001 in return for a monthly payment of around eight US dollars. Similar steps were taken by the governments in Georgia and Armenia, leaving veterans severely worse off.

In the office of Hrant Hovhannesyan, the 91-year-old chairman of Armenia’s Union of Veterans, May 6 was chaotic.

Russia had invited ten Armenians to represent the 325,000 people from the republic who fought in the Soviet army, and other organisations, universities and newspapers were calling with invitations and offers.

He said, however, that such attention was rare.

“People speak to us sweetly only in these few days. The anniversary will pass, and they will forget about us,” Hovhannesyan, a former colonel, said.

“The worst treatment of veterans is here in Armenia. The authorities look at us as if we fought worst of all. In other countries of the former USSR, people like me receive four times more. The lowest pension is in Armenia.”

He said the average pension is just 131 dollars and there are almost no benefits for veterans, who despair of the lack of attention paid to them.

“They have these military-patriotic events in schools. One time a pupil asked me if I was a veteran, and I said I was. He said his grandfather was a veteran too, and once he asked for a little money to buy an ice cream and his grandfather said he didn’t have any,” Zhora Tunyan, chairman of Arabkir, a separate veterans’ organisation, said.

“This boy said, ‘If you fought, defended the country, and you don’t have money, then why should I go to serve our country?’ Do you understand? This is a question of military-patriotic upbringing.”

In neighbouring Georgia, meanwhile, the government is promising a spectacular parade to mark May 9 this year, but the veterans say this disguises a situation every bit as bad as in Azerbaijan and Armenia.

Shota Gamkrelidze, a Georgian professor of psychiatry, fought in the defence of Moscow, and was much decorated. He was one of 700,000 Georgians sent to the front out of a population of 3.8 million. More than 300,000 were killed.

“All the attention paid to the veterans is just a one-off, limited to pensions and holiday lunches on Victory Day which are reminiscent of soup kitchens,” Gamkrelidze said.

“The question is not about the benefits, many of which have been abolished. To demand wealth in a country where many people are starving would be a sin. But there should be some kind of attention, or respect. We took part in the victory over fascism after all.”

According to state figures, 5,917 Georgian veterans are still alive, and receive between 46 and 73 dollars in pensions a month. Most of their benefits have been cancelled, leaving them – like their Azeri comrades – in desperate conditions.

For Grigol Verulashvili, 87, who lost part of his foot fighting the Germans, the financial problems make his health trouble far worse.

“The money is not enough for treatment and medicine, and it is hard to go to the clinic because of my bad eyesight, and because it is difficult to walk. There is almost no one to escort me,” he said.

Almost as bad, however, he said, is the government’s attitude to the veterans. Last year, the memorial to the dead in the city of Kutaisi was removed in what appeared to be a drive to distance Georgia from its Soviet past.

The differences between Moscow and Tbilisi that have marred relations since 1991 have left many young Georgians viewing World War Two as a Russian conflict.

But for veterans who remember that Joseph Stalin, who led the Soviet Union to victory, was a Georgian born in Gori, such an approach is disrespectful to their sacrifice.

“It is wrong to diminish Stalin’s contribution to the victory over fascism. I am convinced that the residents of Gori would not allow the removal of his monument from there,” Vaja Kharatishvili, deputy chairman of the Council of Veterans, said.

Commentators regretted that the Georgian government’s decision to diminish the significance of the Soviet past has also led to a decline in the respect shown to World War Two veterans.

“Veterans of the Great Patriotic War do not receive the attention they deserve, especially since they are now very few. And, in fact, now they are called veterans of World War Two, and not of the Great Patriotic War. They’ve changed the name. They say now, that it was not our war,” Giorgi Khutsishvili, director of the International Centre for Conflicts and Negotiations, said.

He said the removal of the monument in Kutaisi was a part of this campaign to brush aside the Soviet years.

“Georgia declared its independence in Soviet times, and there has been a complete rejection of the fact that Georgia played a serious role in the fight against fascism. In this war, about a quarter of the male population was killed, my grandfather was killed outside Kerch. The USSR did have pages in its history to take pride in and we were part of that. We can be proud of the fight against fascism,” he said.

The governments of the region deny any attempt to diminish the role of the veterans, and say that new medals will be issued to mark the 65th anniversary of the defeat of Adolf Hitler.

But perhaps a truer picture of veterans’ condition can be seen in the antique shops in the centre of Baku, where Red Star medals – awarded for exceptional service or 15 years service in the Red Army - are on sale for around 15 dollars.

Sabuhi Mammadli is a journalist with the Azadliq newspaper.
Samira Ahmedbeyli is an IWPR staff reporter.
Karine Asatryan is a reporter from the A1+ television company.
Lela Iremashvili is a freelance reporter.