Questions raised about landmark council’s ability to bring together activists inside and outside the country.

Questions raised about landmark council’s ability to bring together activists inside and outside the country. 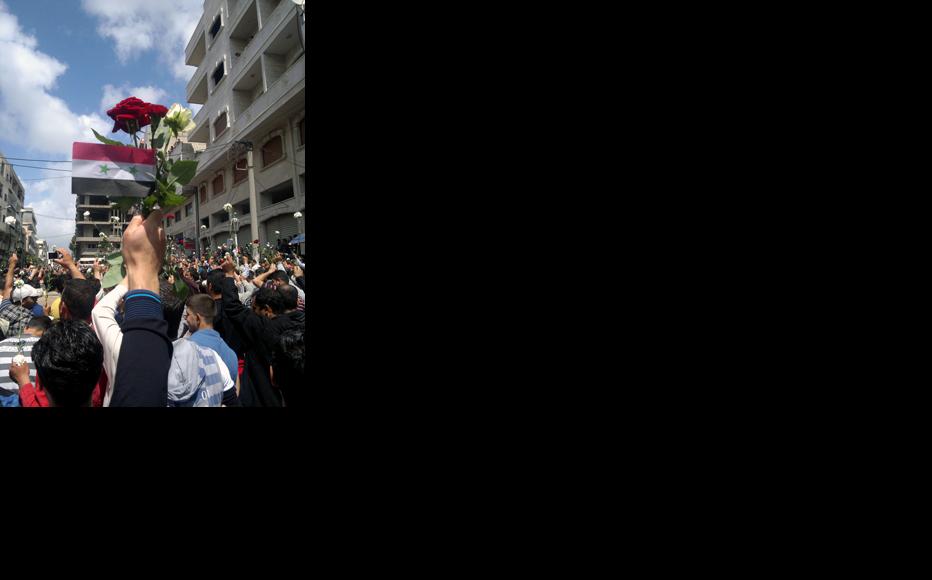 Demonstrators hold up flowers at a protest in the Syrian town of Banias earlier this year. (Photo: Syria-Frames-Of-Freedom/Flickr)
The link has been copied

While its members hail the formation of a new Syrian anti-regime assembly as the biggest effort to date to form a representative body for activists, analysts say it is still unclear whether this will succeed in uniting a long-divided opposition.

Leaders of the 140-member Syrian National Council, SNC, formed during a September 15 opposition meeting in Istanbul, say it reflects an unprecedented level of coordination.

“This attempt is unique,” Yaser Tabbara, a United States-based lawyer and member of the steering committee of the SNC, said. “It is the most systematic, scientific effort to form an opposition that is united and independent at its very core.

“People who have been divided for over 50 years have decided to put politicking aside and work on creating a neutral platform, without baggage or personal ambition.”

Opponents of the Syrian regime have launched a number of attempts at creating a formal representative body since the uprising began in March, most of which have been thwarted by geographical or long-standing political and ideological divisions amongst members.

The SNC is the first body of its kind to include major representation from the Local Coordination Committees, LCCs, the main groups driving the protest on the ground in Syria, who will make up around 60 per cent of its members.

The SNC also includes exiled representatives of the Muslim Brotherhood and signatories to the 2005 Damascus Declaration, a landmark statement of unity by opposition members.

“The members are well-recognised and have excellent relationships inside and outside Syria,” Tabbara said. “The fact that this process of negotiation has been three months in the making indicates the most mature and advanced effort [so far].”

The SNC is currently meeting once again in Istanbul to elect its formal leadership, but with continuing uncertainty over the makeup and aims of the council, some commentators are sceptical about the opposition’s ability to overcome divisions.

“I am not sure in the end how different this council is,” Salwa Ismael, politics professor at the School of Oriental and African Studies, part of London university, said. “It is already contested, with different groups on the ground and abroad saying it is not representative.”

Some leading figures members of the opposition-in-exile old guard, such as Michel Kilo, who heads the National Committee for Democratic Change, are indeed not included on the recently released list of members.

But while the SNC lacked support from some central groups when first launched in August, its membership has since grown to include several key groups including the Syrian Revolution General Commission, SRGC, which had initially declined to endorse it.

With the exception of a few public figures, the Syrian internal opposition remains largely faceless but well-organised. By contrast, the opposition abroad is rife with division.

“The problem right now is that we have groups outside who don’t know each other, with a history of division spanning 40-50 years in which all activists were persecuted ruthlessly by the regime,” Ismael added.

“Almost 100,000 political prisoners were taken over this period and the regime led a successful campaign in dividing people and generating mistrust. It takes a long time to overcome that.”

But with human rights groups estimating that the civilian death-toll from the conflict has exceeded 3,000, and with a transition to democracy by the embattled Assad regime unlikely, the need for the opposition to present a united front is ever more pressing.

“International governments want some kind of transitional council, like in Libya, that they can recognise and deem legitimate,” Christopher Phillips, an analyst for the Economist Intelligence Unit’s Middle East team, said. “But equally, they are not stupid.

“The difference is that the opposition in Libya was locally-based and organised, and until the Syrian opposition actually looks like they are viable force capable of challenging Assad, the international community has no real leadership to refer to.”

The SNC backs the toppling of the regime, and members describe its role as handling the international relations of the activist movement on the ground - but do not yet claim to officially represent the revolution.

They will need to tackle a number of major issues, key amongst them whether the emphasis on keeping protests peaceful should be abandoned in favour of taking up arms against the regime.

The threat that the uprising could descend into sectarian or civil conflict has loomed large in regime propaganda, as well as the minds of many Syrians

“The elephant in the room is the militarisation of the revolution,” said Malik al-Abdeh, head of the London-based Syrian opposition satellite channel Barada TV. Abdeh, who maintains strong links to the opposition inside Syria and whose brother, Anad, is a leading member of the SNC’s diaspora leadership, explained that the group has yet to agree on a unified stance on armed opposition or intervention.

“It has become quite obvious that the uprising is not as peaceful as we would like,” he said. “The question is, do we endorse armed opposition or do we maintain peaceful protest at the risk of not getting anywhere?”

There have been a number of army defections in recent weeks to a group of officers calling themselves the Free Syrian Army, but as defections remain relatively small in number, and the personnel low in rank, they are unlikely to shift the balance of the conflict in the near future.

While the SNC says it has no formal links to the Free Syrian Army and does not endorse its campaign, leaders say they welcome the defection of political and security personnel from the regime.

The SNC has stated that it is resolutely opposed to foreign intervention, but some opposition voices have called for civilian protection mechanisms, such as no-fly zones in parts of the country to protect activists on the ground

The SNC has yet to devise a clear policy on the subject, but said it will discuss different civilian protection possibilities during its Istanbul meeting

As long as the United Nations remains in its current stalemate over a sanctions resolution or clear condemnation of the regime’s violent tactics, an intervention like the no-fly zones imposed on Libya is distinctly unlikely. Analysts say the present violence could endure for months to come.

“We are going to witness more of the same until there is some significant tipping point reached on one side or the other,” Phillips said.

“Defections are only coming in dribs and drabs and the opposition needs more support, either internally or internationally, but until it swells to a critical mass it won’t get it. Meanwhile, the regime will continue to suppress protests until it is overthrown or its resources are exhausted.”

The Arab Spring
Syria
Opposition
Connect with us