Latest intervention wins promises of talks, but no sign of possible compromise. 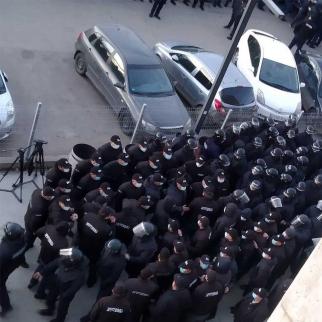 Riot police as seen from the inside of the United National Movement's headquarters before they raided the building to take Nika Melia into custody. © Tamta Gogolakhe

Latest intervention wins promises of talks, but no sign of possible compromise. Analysts warn that the repeated international attempts at mediation may not be enough to resolve the ongoing political crisis that continues to threaten Georgia’s European path.

In the latest intervention, European Council president Charles Michel arrived in Tbilisi on February 28 to attempt to bring the warring factions together.

His visit followed the February 23 detention of Nika Melia, chairman of the largest opposition United National Movement (UNM) party, in a police raid on their headquarters.

The opposition deemed both the case and the court verdict against Melia to be politically motivated and announced a series of regular public protests throughout March.

Melia’s arrest also unleashed a wave of international criticism, with the US embassy warning that “Georgia has moved backward on its path toward becoming a stronger democracy in the Euro-Atlantic family of nations”.

Michel, after mediating a meeting between newly-elected prime minister Irakli Garibashvili and opposition leaders, was able to announce the renewal of political dialogue. He said that the Georgian authorities would report on the progress they had made in these talks at the EU-Georgia Association Council meeting, expected to take place in Brussels on March 16.

However, experts fear that Michel’s intervention may follow the same path as previous attempts by US ambassador Kelly Degnan and her EU counterpart Carl Hartzell in December 2020.

Georgia has been locked in a political impasse since the disputed October 31 parliamentary elections. Major opposition parties accuse the ruling Georgian Dream (GD) party of election-rigging, and have refused to take up their seats. They demand snap elections, as well as the release of detainees they deem to be political prisoners.

Only six opposition lawmakers have so far breached this boycott to join the 90 ruling GD parliamentarians in the 150-member legislature.

Kornely Kakachia, director of the Georgian Institute of Politics, said that it was hard to see quite how a compromise could be arranged between the ruling party and the opposition.

“When there is talk of negotiations and consensus, for which both sides have expressed their readiness - at least formally during President Michel’s visit - having red lines should not be an option; the problem is that both sides have so-called red lines,” he said.

He suggested two scenarios that could end the stalemate.

“One, which everyone is talking about, would be scheduling snap elections, which is an established practice, however I cannot say how willing the ruling party is,” he continued.

Indeed, following the meeting with Michel, Garibashvili said the ruling party would not consider snap elections under any circumstance. GD has instead shown willingness to conduct a number of electoral reforms to persuade opposition parties to enter parliament, and initiated a draft bill with the opposition Citizens party on March 2.

Another option could be power-sharing. Under this scenario, Kakachia continued, the opposition would lift its boycott in exchange for executive level positions in government and the release of detainees.

“Then power sharing would take place in the parliament, in its committee and commissions, and the ruling party would also have to be ready for a coalition government,” he said, noting that this was unprecedented in Georgian politics.

“As things stand, both scenarios appear to be unrealistic. But, if we consider what could follow if the confrontation we have today continues — compared to that, these options seem preferable,” he concluded.

Tornike Sharashenidze, the head of the international relations MA programme at the Georgian Institute of Public Affairs, said that the ruling party would do everything in its power to convince western allies that it was the opposition that was undermining a possible consensus.

Sharashenidze noted that if Melia was released from pretrial detention, Georgia’s international partners would likely expect the opposition to retract its demands and lift the boycott.

“If the opposition doesn’t enter [parliament], I think the opposition will lose in this struggle,” he said. “They have been presented with the option to participate in the [election investigation] commission, and foreign partners also hinted that they should do so.”

He also excluded the possibility of the west issuing sanctions against former GD chairman Bidzina Ivanishvili and its high-ranking officials, adding, “The West is not convinced that the elections were rigged.”

He said that he fully expected the international community to continue to formally recognise the current parliament.

“If the ruling party fails to convince the west that the opposition is the one disrupting negotiations, the worst thing that could happen would be delayed financial assistance for Georgia,” he noted.

“A complete failure of diplomatic approaches would be detrimental, first and foremost, to the country's western course,” she said.

However, Dundua did not predict large-scale public demonstrations if the EU-mediated dialogue failed to produce results.

“It is true that the government is discredited in the eyes of part of the population - and perhaps this part is quite numerous - but the opposition is no less discredited due to both its political past and current actions.

Giving Voice, Driving Change - from the Borderland to the Steppes
Georgia
Elections, Opposition, Protests
Connect with us