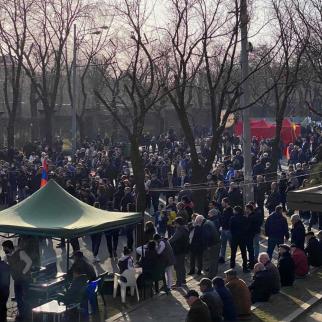 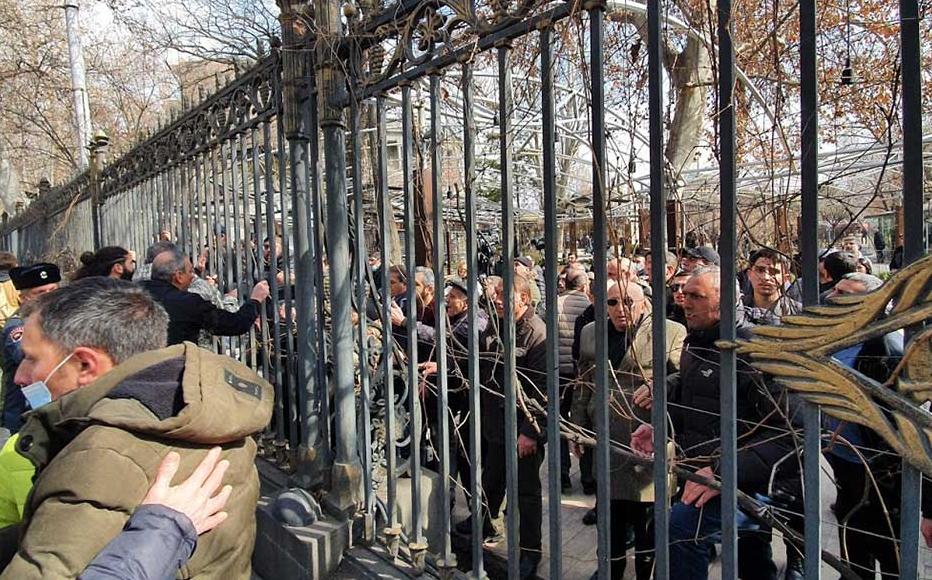 Pashinyan's protestors in a verbal clash with those against him at a rally in early March. © Arshaluys Mghdesyan
The link has been copied

Analysts fear that the uneasy truce reached between Armenia’s government and the military leadership will fail to provide a long-lasting solution to the country’s political turmoil.

The stand-off between Prime Minister Nikol Pashinyan and the army general staff, ongoing for more than a month, ended last week with the appointment of loyalist Artak Davtyan as chief-of staff.

In addition, after talks with opposition parties aimed at resolving the internal political crisis, Pashinyan agreed to their key demand for early parliamentary elections. These are now set for June 20.

Tensions have been running high since Armenia’s defeat in last autumn’s Karabakh war. Widespread calls for Pashinyan to step down culminated in a February 25 statement by army generals demanding that the prime minister resign along with his government.

In response, Pashinyan dismissed Onik Gasparyan from the post of army chief and after a legal battle managed to appoint Davtyan as successor on March 22.

In his inaugural speech, the newly appointed chief of staff Artak noted that the army was subordinate to the government and would remain politically neutral.

Government supporters welcomed this as a landmark decision.

“Now we can say that the conflict with the high-ranking army officers is over,” said Andranik Kocharian, the chair of the parliamentary defence and security committee and a member of the ruling My Step faction. “The military will do its job, which is defending the homeland and rebuilding the army after a tough war. In-depth reforms will be carried out in the armed forces.”

However, Alexander Iskandaryan, director of the Caucasus Institute, said that the dispute remained far from resolution.

“It is true that Onik Gasparyan left and new chief of general staff was appointed, but the crisis left negative traces in the relationship,” he said. “The generals, many of whom signed the statement demanding the resignation of the political leadership, are still leading the army and it is extremely difficult to dismiss all of them. On the other hand, the elites are split and it is more complicated than the whole story around Onik Gasparyan.”

Iskandaryan added that it remained unclear how these generals will accept Davtyan’s authority.

Gasparyan has continued to challenge his dismissal in the courts. His lawyers said that he appealed to the prosecutor general to open criminal cases against Pashinyan and Defence Minister Vagharshak Harutyunyan for having “ignored judicial acts” by appointing a new chief-of-staff.  However, in response to an IWPR inquiry, the prosecutor general’s office said that they had not received any such application.

Officials deny there is any legal ambiguity as to who now heads the army.

“There is no legal gap. Onik Gasparyan was dismissed from the post of Chief of the General Staff by virtue of law and Artak Davtyan was appointed to this position by virtue of law,” a spokesperson for the Armenian justice ministry told IWPR.

In order to avoid future conflict, the ruling My Step faction decided to completely subordinate the general staff to the minister of defence, rather than the chief of staff reporting directly to the premier as is currently the case.

“In the near future, new legislative amendments will be initiated to make the general staff even more subordinate to the minister of defence,” Kocharian said.

Martial law was abolished ahead of the June 20 elections. Pashinyan will now need to step down and parliament be dissolved before voting can take place.

Not all parties will take part in the elections. Former defence minister Vazgen Manukyan, who heads the opposition Homeland Salvation Movement, said that their demand that Pashinyan resign in favour of an interim government had not changed.

“I strongly doubt that the elections will take place on June 20. I believe that any elections under Nikol Pashinyan are a disaster for Armenia. If, nevertheless, it is impossible to prevent these elections, I will not participate in them,” he told reporters.

Political analyst Hakob Badalyan cautioned against any great hope for these upcoming elections.

According to a telephone survey conducted in February, before the elections were announced, some 44 per cent of the public did not want to vote at all, while 33 per cent were ready to vote for Pashinyan's bloc. Other political forces failed to gain more than three per cent of support.

“When there is such strong apathy in society, it is difficult to expect high-quality elections aimed at resolving the crisis,” Badalyan said. “If political forces cannot work with the apathetic part of the society, the elections will not resolve the crisis, but will become a source for future crises.”

“The society is in apathy,” Iskandaryan agreed, adding, “Pashinyan and the opposition are fighting with each other for power [but] both sides are quite weak.

Giving Voice, Driving Change - from the Borderland to the Steppes
Armenia
Elections, Crisis, Army
Connect with us