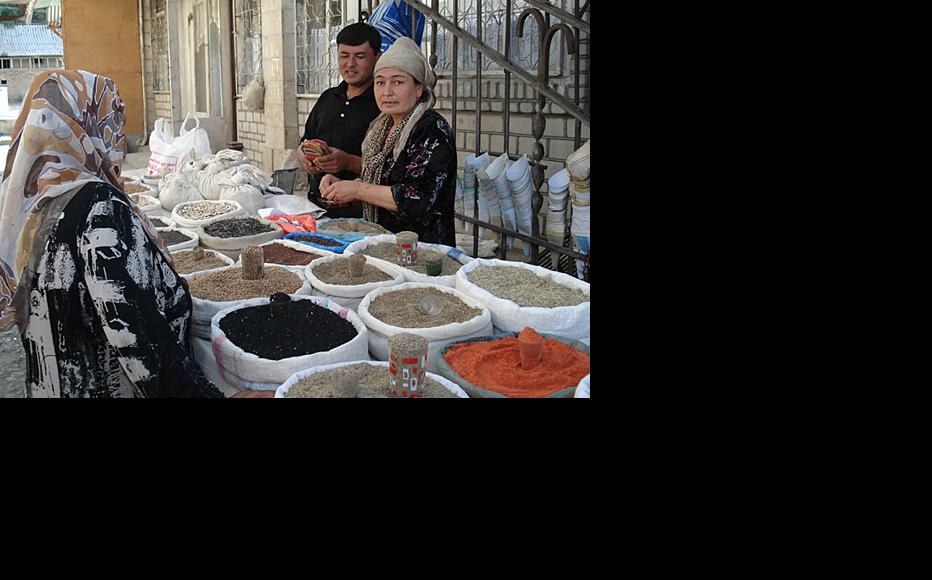 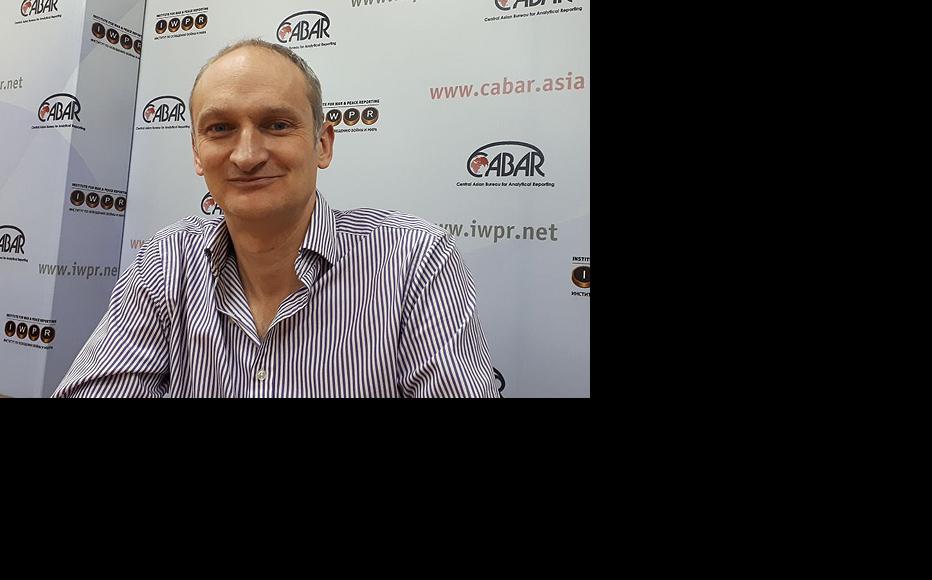 Nick Megoran, reader in political geography at Newcastle University. (Photo: IWPR)
The link has been copied

Nearly ten years after more than 400 people were killed in a wave of violence between Kyrgyz and ethnic Uzbeks in southern Kyrgyzstan, many tensions remain between the two communities.

Uzbeks comprise Kyrgyzstan’s largest minority, making up around 14.6 per cent of the population and are concentrated mainly in the southern and western parts of the country.

Nick Megoran, reader in political geography at Newcastle University, has spent years studying these interethnic relations. He tells IWPR that civil society needs to put pressure the politicians of both countries to create the right conditions for co-existence – and that the sphere of education and language are the perfect vehicles to facilitate this.

IWPR: You are a frequent visitor to southern Kyrgyzstan. How would you describe the relations between Kyrgyz and Uzbek there?

NM: I would say that there is more acceptance now of Uzbeks in the public space. Initially after 2010, many were afraid to go to parks, to streets, and to an extent many Uzbeks still don’t use public space as much, they feel a bit afraid at some level.

The question about how minorities can live long-term in Kyrgyzstan has still not been answered. In Soviet times, the Kyrgyz in Uzbek SSR would come to Jalal-Abad, Osh or Frunze to study and then they could go home, easily back and forwards because they were no border controls. This continued into the 1990s too.  At the same time, Uzbeks living in the Kyrgyz SSR would go to Andijon, Ferghana, Namangan, Kokand or Tashkent to study. And then after studying they could come back and work in schools or offices and they could move back and forward to see their friends and family whenever they wanted. In the 1990s this continued.

What we see now is that this is difficult because of borders and a lack of mutual exchange. It is difficult for Uzbeks in Kyrgyzstan to have good, higher education in their own language, and it is difficult for Kyrgyz in Uzbekistan to have that too. What needs to happen is that the governments of both countries need to recognize that the long term interests of both minorities is connected There needs to be opportunities for Uzbeks in Kyrgyzstan to come to Uzbekistan to study and work and return, and Kyrgyz in Uzbekistan to go to study in Kyrgyzstan in their language and then come back. As long as there is no mutual recognition of degree qualifications, as long as you don’t have mutual exchange programmes, the question remains - what is the long-term future of all these minorities? And that is the question in both Uzbekistan and Kyrgyzstan.

Uzbek president Shavkat Mirziyoyev has pursued a friendlier policy towards neighbour countries in terms of cooperation and border controls. Will this affect how Kyrgyzi Uzbeks in Uzbekistan - and Uzbek Kyrgyz in Kyrgyzstan – get their education?

So, we need long- term stability and this takes time to build trust. In the 1990s, President [Askar] Akayev took some good measures for the education of minorities in southern Kyrgyzstan; he opened an Uzbek philology and pedagogical faculty in Osh state university and also the Kyrgyz-Uzbek university, and these provided education in Uzbek. Thousands of students came from Uzbekistan to study in Osh, it was cheaper and also the quality was good. Furthermore, this created wealth for the citizens of Osh, as these students spent money on food and clothes and other necessities. However in the 2000s when the borders were closed, these students stopped coming to Osh, they thought it was too difficult, and after the violence in 2010 they stopped completely. So, the long-term stability of the border regime and opportunities for mutual recognition and qualifications could create an environment where people could trust the system enough to commit their futures for two to five years.

IWPR: Is Kyrgyzstan ready for this?

In 2010 the Kyrgyz-Uzbek University was renamed Osh Social University. Then, after Mirziyoyev’s visit, it was renamed again, to Kyrgyz-Uzbek University, so there is some recognition. But there is a serious problem in that many Kyrgyz people believe that violence in 2010 was Uzbek separatism - this is the word they use. Great Kyrgyz scholars, like Professor Abylbek Asankanov of the Kyrgyz Academy of Sciences, who is the world expert on the events of 2010 and [the previous interethnic violence of] 1990, has said that there was no separatism, that this is a misunderstanding. Personally, I have lived many years among Uzbeks in south part of Kyrgyzstan and they have never said that they want separate state or change the border. But many ordinary Kyrgyz people believe that there were separatist forces that wanted to destroy the state. And this means that many Kyrgyz people are reluctant to allow Uzbek education in the Uzbek language because they fear, without reason, that this will have serious, negative political consequences. And so I think one of the tasks, for the intelligentsia in Kyrgyzstan, the political class, the mass media - and all of these groups have not always been responsible in the language they have used - is to say clearly and repeatedly that “there was no separatism amongst Uzbeks in 2010. Uzbeks have an equal future with our citizens in our country and we will provide new opportunities for that”.

Do you think that the intelligentsia and at least some politicians are ready to start saying that?

Well, I think there is some hope when we have Professor Asynkanov saying this. There is no one in Kyrgyzstan, or anywhere on earth who knows more about Kyrgyz-Uzbek relations in Kyrgyzstan than him. When he says, categorically, there was no separatism, this is a good sign. We must be led as a society not by feelings, but by scientific evidence….So I am hopeful that Kyrgyzstan is a reasonable society, and the reason will prevail.

If the Kyrgyz authorities give more opportunities for higher education in the Uzbek language, fpr instance, or create a separate Uzbek-language television, what will change?

What will change is that more of the Kyrgyzstan population will be given the chance to reach their full potential and make a positive contribution to Kyrgyz society. In the 1990s, when there were Uzbek language institutions working in Osh, I noticed that there was real intellectual exchange, that Osh was becoming an intellectual powerhouse in the region. In Uzbekistan at that time it was difficult to do independent research, because government ideology was controlling research, but in Kyrgyzstan there was more freedom and Uzbeks in Osh accepted that…I was living in an Uzbek mahalla in Osh at that time, and Uzbek people would look at the television from Tashkent and say, “We know it’s all lies.” They liked to watch films and listen to music, but as for politics, they know it’s all lies in Uzbekistan. In Uzbekistan in the 1990s, you could not go to the mosque freely, you could not do business freely, you could not say what you wanted to do because the state controlled things. Uzbek people in the 1990s said, “Thank God, we live in Kyrgyzstan. The Kyrgyz developed intellectually, they have freedom, this is a much better place to live than in Uzbekistan.” So, I think that by providing more opportunities for Uzbek scholarship and learning in the Uzbek language, you will enhance Kyrgyzstan.

Why do societies not trust minorities? They think, “You are not loyal” and minorities do not trust the government, they think “You do not care about us.” Once you create a good political framework, then in one or two generations, maybe, change will come.

Giving Voice, Driving Change - from the Borderland to the Steppes
Kyrgyzstan, Uzbekistan
Conflict resolution, Reconciliation
Connect with us