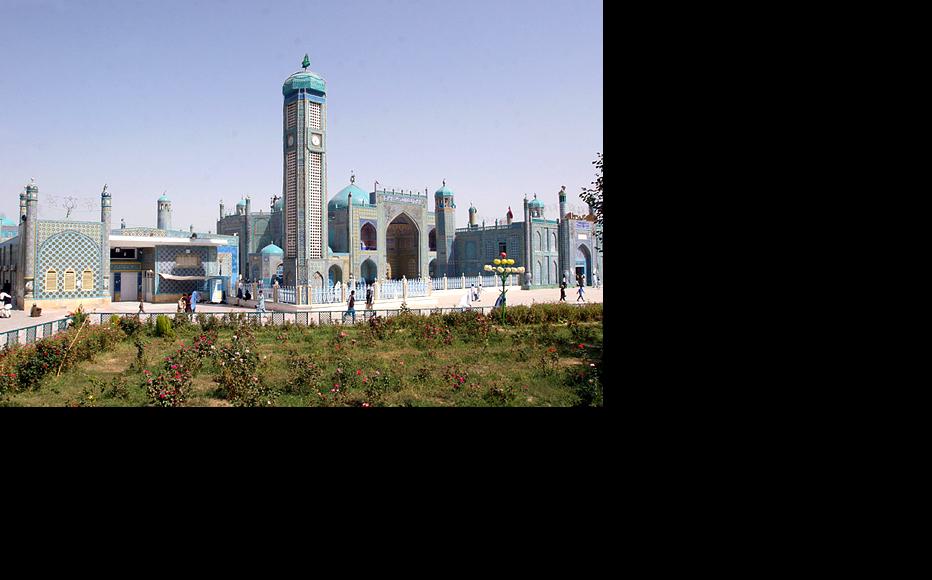 The Hazrat e-Ali mosque complex in the northern town of Mazar e-Sharif. (Photo: ISAF Public Affairs Photo)
The link has been copied

The majestic blue-tiled Hazrat e-Ali mosque complex in the centre of Mazar e-Sharif serves as a recreational space as well as a place of worship for many of the city’s residents.

But Ahmad Javed, (not his real name), lounging on a chair near the public toilets, was there for business.

The 15-year-old was waiting for customers looking for sex at the shrine, revered as the burial place of Ali, the son-in-law of Prophet Muhammad.

“Because I’m so poor and have no other work, I have to come here to bargain with older men over the price of having sex with them, just to earn a little money,” he said.

Javed said that many of his sex worker friends also came to the mosque complex to find customers. It had become a well-known marketplace for such services, he continued, adding, “I’m happy that the police don’t interfere in our business… as long as we don’t have any problems with our customers.”

Human rights activists say there is a flourishing trade in sex with young boys in the northern province of Balkh. As well as male prostitution, there remains the time-honoured practice, deplored by human rights defenders and clerics, of “bacha bazi” or boy play.

Boys kept by powerful older men are made to dance at special parties, and often sexually abused afterwards. Also known as “bacha bereesh” - literally, “beardless boys”, they are under 18, with 14 the preferred age.

Local strongmen often keep boys for sex, even competing with each other over who had the most handsome youths or the most talented dancers.

Qazi Syed Ahmad Same, head of the northern branch of the Afghanistan Independent Human Rights Commission (AIHRC), said that his organisation had long campaigned for the government to act against such abuse.

“Having sex with young boys is inhumane and we want the government to take serious action against such shameful acts,” he said.

He noted that the AIHRC had carried out a major national investigation into the issue in 2014, speaking to nearly 2,000 people across 14 provinces of the country. The research revealed that poverty was a key factor in the spread of such abuse, as well as the lack of law enforcement and the fact that powerful people were able to act with impunity.

Many boys also became involved in sex work after being abused, the study also found.

That was the experience of Younis, originally from the Maimanah district of the northern Faryab province.

“When I was 14, I used to fly kites,” he recalled. “One day when I was flying a kite in a small garden in our village, two youths came up to me and held me down tightly and raped me. It was such a painful experience.”

He continued, “After I was sexually assaulted, I was so sad and so depressed that I thought that my life was over. I was too frightened and scared to able to talk about this experience with anyone. Just a few days after the assault, one of the youths who had sexually assaulted me came along with two other men and forced me to have sex with them again. This time, they paid me a lot of money to keep silent.

“After that, my attackers told their friends and other people how they had had sex with me and eventually I became involved in sex work.”

Younis is now employed in a mosque west of Mazar e-Sharif, far away from his hometown, calling the faithful to prayer five times a day and sweeping the compound. The worshippers know nothing about his past, he said, and he himself now bitterly regrets selling himself for sex.

What complicates the issue of sexual exploitation is that homosexual acts are utterly taboo in Afghan society, as well as being illegal under both Sharia and Afghan law. Homosexuality is generally categorised as a form of deviance and associated with prostitution and pedophilia.

Mawlawi Ghulam Jelani Hanif is a member of Balkh’s Scholars’ Council and one of Mazar-e Sharif’s leading religious scholars.

“In Islam the punishment for every kind of sexual abuse and assault is clear,” he said. “Such kinds of execution were only seen during the Taleban regime. I saw many executions of homosexuals in the parks of the main cities of our country during the Taleban regime where the men were killed publicly either by flogging or by toppling a wall on them.”

Bacha bazi itself is not clearly defined in Afghan law, but article 427 of the Criminal Law prohibits rape and pederasty and states that perpetrators are liable to a long period of imprisonment. New legislation under consideration by parliament is intended to define both the crime and the possible penalties more clearly.

Saleh Mohammad Khaliq, Balkh’s director of information and culture, said, “Prostitution whether male or female is a crime and regarded as a wicked, immoral, and sinful act in our country. The people who commit such crimes should be punished.”

“Due to the fact that that powerful people who break the law are not prosecuted and punished, and because of the inability of the judicial services to implement the law, pederasty and sex with young boys has increased in Afghanistan,” Khaliq continued.

“People who have sex with young boys can be sentenced to a long prison term, but I think this isn’t enough and that there should be more severe punishments for those who force young boys to have sex with them,” he concluded.

Others say that long periods of lawlessness throughout decades of conflict in Afghanistan had exacerbated rates of abuse.

Civil society activist Azeem Azeemi said, “Unfortunately, during the wars in Afghanistan criminals who had sex with young boys were not punished or prosecuted due to the lack of law enforcement. That meant that this wicked custom became more common and increased.”

Balkh police chief Syed Kamal Sadat said that they were now “acting seriously” against perpetrators and had arrested and were prosecuting 60 men for pederasty in 2016.

He added, “We will continue to make great efforts to arrest people who commit such shameful and wicked acts in Balkh province.

Fawzia Hamidi, a lawyer with the violent crime department of Blakh’s attorney’s office, told IWPR that they had already finished investigating about half of the cases, but that an enormous amount of work remained.

She said, “Some people among the accused are related to local commanders.”

Sadat agreed, adding that powerful local officials also had a record of supporting and defending such criminals, going as far as preventing police officers from arresting them and even sheltering suspects in their own homes.

Balkh provincial council head Afzal Hadid said this was not true and was just an attempt by police to cover up their own failure to enforce law and order. Law enforcement officials were also corrupt, he added.

He added, “Government offices and departments always try to make excuses to hide their carelessness and irresponsibility. They accuse us, while they take bribe money to release people who commit pederasty.”

Even when perpetrators are brought to justice, their victims face a troubled future. There have been many cases in which the boys themselves have been prosecuted, and experts say that the psychological effects of abuse are long-lasting.

Mohammad Alim Raheen, a psychiatrist and the chancellor of Balkh’s medical university, said that the repercussions were often severe.

“Almost all boys who involved in sex work are affected by mental disorders such as depression, anxiety, nightmares, paranoia and other similar problems,” he said. “These boys spend their whole lives suffering.”