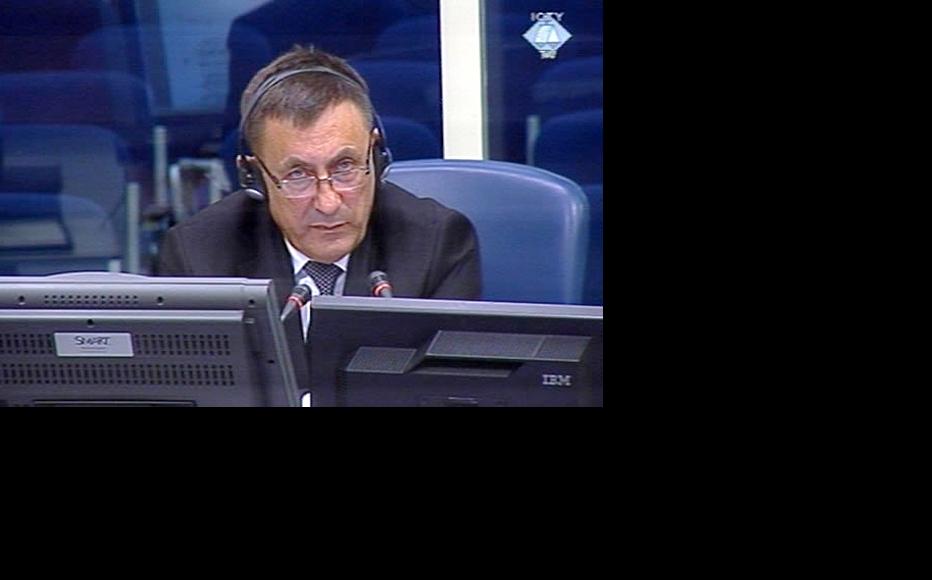 Milovan Bjelica, defence witness in the Karadzic trial. (Photo: ICTY)
The link has been copied

A defence witness at the Hague tribunal this week claimed that Bosniaks and Serbs in his municipality were treated the same way regardless of ethnicity, and that Bosniaks who left the area did so voluntarily. The witness, Milovan Bjelica, acknowledged that some Bosniaks were detained but said he did not take an interest in why that happened.

Bjelica was testifying for the defence in the trial of wartime Bosnian Serb president Radovan Karadzic.

Now mayor of Sokolac, Bjelica was head of the Sokolac municipal board for the Serbian Democratic Party, SDS, when the Bosnian war broke out in 1992.

He previously testified in the trial of senior Bosnian Serb politician Momcilo Krajisnik in 2006.

His witness statement was entered into evidence, and Karadzic asked only a few additional questions, including whether Bosniaks were killed by Serb forces in Sokolac during the war.

Bjelica said this did not happen. Local Muslims were “well fed”, he said, and those who left their villages returned to their lands after the 1995 Dayton Peace Accords.

Prosecutors allege that Karadzic, the president of Bosnia's self-declared Republika Srpska from 1992 to 1996, is responsible for crimes of genocide, persecution, extermination, murder and forcible transfer which "contributed to achieving the objective of the permanent removal of Bosnian Muslims and Bosnian Croats from Bosnian Serb-claimed territory".

He is also accused of planning and overseeing the 44-month siege of Sarajevo that left nearly 12,000 people dead, as well as the massacre of more than 7,000 men and boys at Srebrenica in July 1995.

Karadzic was arrested in Belgrade in July 2008 after 13 years on the run. He represents himself in the courtroom.

During the prosecution’s cross-examination, lawyer Katrina Gustafson pressed Bjelica on numerous inconsistencies in his previous testimony and current witness statement.

Gustafson pointed out that in his statement, the witness said he “assumed detained persons [in Sokolac] did not have the required hygiene since the [facilities] were not envisaged for this purpose.” In another part of his statement, he said that the “hygiene was satisfactory”.

“It is true that hygiene was not satisfactory and later on toilets were introduced,” Bjelica replied. He added that no one fell ill, and that prisoners ate the same food as the soldiers guarding them, but he admitted he never visited any of the detention facilities himself.

Gustafson then told him about a 62-year-old housewife taken from her village and detained in the Sokolac primary school in July 1992. The lawyer produced a document addressed by the exchange commission in Sokolac to the head of the Bosnian Serb army’s exchange commission, listing the woman as a prisoner, along with others.

“You say [in your statement] that as far as you know, Muslims who were suspected of taking part in terrorist and sabotage operations were detained in these facilities. Did you know that a 62-year-old housewife was imprisoned first in Sokolac primary school and then in [another village]?” Gustafson asked.

“No, I didn’t. I see this for the first time. I don’t know what reason are for her detention was since there were women taking part in operations, carrying weapons and setting up explosives. I don’t exclude that she was one of them. No one says here why she was detained and she doesn’t mention that in her statement,” Bjelica said.

“In fact, Mr Bjelica , you don’t have a clue as to why the people on list were detained, isn’t that right?” Gustafson asked.

“No, I wasn’t interested. It was up to the security organ and I had no right to meddle. They must have taken part in certain activities. There were other inhabitants who were certainly not detained. There must have been justified reason why they were brought in,” the witness said.

Gustafson pointed out that he had seen these documents during his testimony in the Krajisnik case, and at that time he said he “didn’t have a clue” why this woman and others were detained.

“I don’t know why they were brought in. There must have been a reason. Maybe someone knew [the woman] had done something.,” Bjelica said.

Gustafson then moved on to the departure of Bosniaks from the municipality.

“You said that some Muslims remained in their homes until end of the war. It’s true by late 1992, there were very few Muslims left in the entire municipality. No more than 30 to 40 households total, right?” she asked.

“I don’t know, in any case the majority left before the end of 1992. I don’t know how many households exactly,” Bjelica said.

The lawyer pointed out that in his testimony in the Krajisnik case, the witness said 30 to 40 households were left.

Bjelica said there were “12 family homes” and “30 to 40 apartments where Muslims resided”.

Gustafson noted that Bjelica had said that other villages “had asked for mutual departure in late 1994” and that this was arranged by international organisations.

In fact, the lawyer said, it was the Republika Srpska exchange commission that arranged the departure, and the residents of one village were taken to prison under police escort.

“I don’t know about that. I don’t know where taken to. I did hear that after Dayton accords they returned to their homes and rebuilt them. I didn’t hear that they suffered any harm. Some left before Dayton and some after,” the witness said.

“It’s true that after the war, you’ve publicly advocated public separation and stated that you don’t want to live with Muslims, right?” Gustafson asked later in the testimony.

Gustafson then produced an article from the Washington Post newspaper dated July 26, 2004. In an interview, the witness is quoted as saying that “we did not want to live with them and we don’t want to be buried near them”, and that “Bosnia has no future has a single state and the three ethnic groups should go their own way”.

“That’s what you stated to the Washington Post journalist in 2004, right?” Gustafson asked.

“I don’t know, it’s possible I said that, but I don’t remember. When I said, we wanted to separate from Muslims, the position of the Serbs is clear – either Yugoslavia, or a separate state for Serbs if they didn’t want to live in Yugoslavia.… Overnight they took away from us the state we had lived in. We were afraid we would be exterminated [as in the Second World War] and that another one million of us would be missing. It’s best to live next to each other, pursuant to Dayton,” Bjelica said.

Gustafson reminded the witness that in his previous testimony, he admitted to making the comments but claimed they were taken out of context.

“Now you have jogged my memory, and thank you for that,” Bjelica said.

Gustafson then read out the last paragraph of the article, which stated that “Bjelica makes no effort to hide his admiration for Karadzic”.

“‘I knew him during the war and I followed him. I wouldn’t like anything bad to happen to Radovan.’ You said that to the journalist on this occasion, right?” Gustafson asked.

“Yes, and I stand by that even today,” Bjelica said.