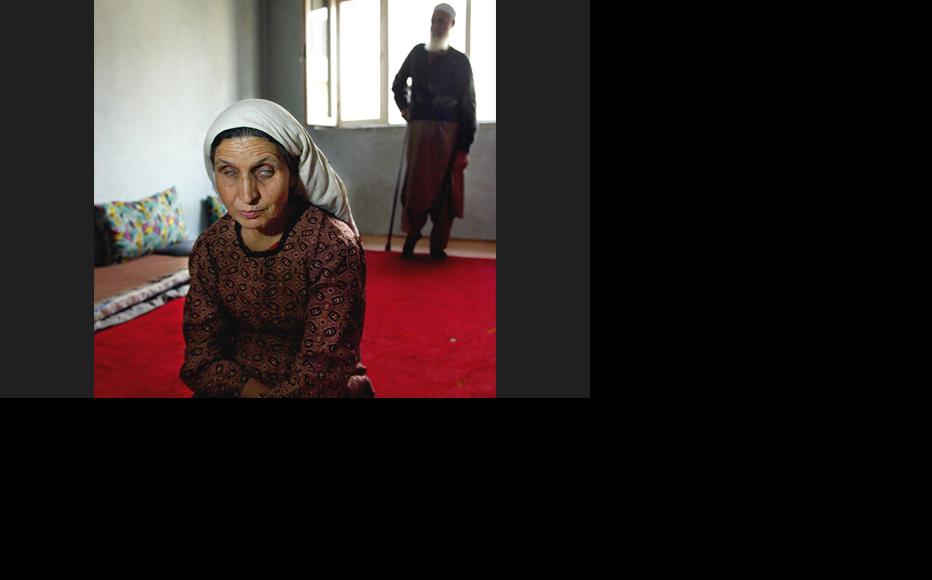 Aqulia and her husband, QaQa Alam are both blind and livie in a home for the disabled in Kabul. (Photo: Paula Bronstein/Getty Images)
The link has been copied

“I want to go to university, with the help of my family, and become an astronaut,” she told IWPR.

Urunus faces a particularly hard road ahead: she is blind. Despite her disability, she is currently top of her class and wants the government to help provide her with the opportunity to study abroad.

“I want to graduate from a foreign university and show people that we are not weak and work harder than even those who can see.”

The UN estimates that more than 400,000 people in Afghanistan are blind and about 1.5 million have some form of visual impairment.

They face multiple challenges, not least a lack of state support. They are not automatically entitled to state benefits, unless they fall into the category of those registered disabled due to injuries sustained in war.

Afghanistan joined the international convention on the blind in 2012, which mandates it to support health services and education for people who were visually impaired.

However, there are only six schools for the blind operating across the country. Although they are supposed to get preferential treatment at university level, community advocates say that the government is failing to live up to these commitments.

Baqi Baryal, who represents blind people in the Senate, argued that the state was willfully misinterpreting Afghan law, which he said mandated that all disabled people should receive basic assistance and access to at least primary education.

The lack of support has led many blind people to fraudulently obtain papers proving that their disability was a result of war. This means that they can then draw a stipend of 900 US dollars a year.

Amina, a 19-year-old from the Kabul district of Dasht-e Barchi, told IWPR that she had been able to exploit contacts with some key officials to get these false documents.

“I studied till eighth grade at the school for the blind in Mazar-e Sharif, and currently just stay at home,” she said, acknowledging that her actions had been wrong.

“Had I not been forced to do so, I wouldn’t have committed such an immoral act.”

Mahnaz, a 20-year-old from Balkh, also said that she had been left with no choice but to turn to fraudulent means.

She had only been able to stay in school until the sixth grade, and her repeated appeals to government offices for help in finding work had come to nothing.

“I got the disabled people’s card from the ministry of labour, social affairs, martyrs and disabled, and so I can get the 900 dollars grant from the government,” she said.

Mohammad Hamayoon, head of the organization for the blind in Mazar-e Sharif, acknowledged that many blind people managed to get war-wounded status so that they could draw this disability stipend – including himself.

Asked why someone in his public position was committing fraud, he said, “When I get a job and [a decent] salary, I will pay this money back to the government.”

Jamila Afghan, the deputy head of the ministry of martyrs and the disabled, said that people who deceived the government in this way should face prosecution.

On the other hand, she said that the state could try to provide some support for people who were congenitally blind if changes were made to the law on martyrs and the disabled.

In addition, according to Abdul Fatah Ahmadzai, the spokesman of the ministry of labour and social affairs, “The government tries to help disabled people access treatment in the country or abroad through the Red Crescent and other international organisations.”

Fahim Sharif, head of special training at the ministry of education, said that some 800 blind children were enrolled across six schools for the blind in Kabul, Balkh, Nangarhar, Ghazni, Khost and Farah. A school in Zabul had been closed due to the poor security situation.

Kabul’s school for the blind, operating since 1979, was recently closed for two months after insurgents used its grounds to attack the neighbouring American University. A truck bomb outside the school’s clinic badly damaged the premises and classes were temporarily suspended.

“The security condition of our country bothers us,” said Maliha Hussaini, 17, a ninth grade student at the school. “There are explosions every day and we lose great students. [After] the suicide attackers entered our schools to attack the American University… the government has not done anything to help us rebuild it.”

The 220 students currently enrolled in the Kabul school have access to handicrafts and carpentry training as well as Islamic studies and Quran classes.

“We teach two fields from the first till twelfth grades at this school,” said Roya, a graduate of the school who returned to teach there.

“One of the sections is vocational education and the other is computer and internet. In addition, there are other subjects too such as memorizing the holy Quran, after the graduation of which the students gain the honourary title of scholar.”

School principle Khwaja Abdul Kabir Sadiqi said that nearly 200 students had graduated from her institution over the last five years, with 25 going on to higher education.

One of them is 20-year-old Elina, who is studying journalism at Kabul university. She said that she had not given up hope that she could recover her sight. Medical experts say that more than half of the visually impaired people in Afghanistan could see again with proper medical care.

“When I went to India for medical treatment, I was told that my eyes were also treatable,” Elina said, adding that she didn’t have the money to return to India. With government funding, she suggested, it might be possible for her to recover her sight.

She said that her only other request to the government was for them to honour their promises to the disabled community.

“The five per cent share of scholarships to disabled people has not yet been given and it should be implemented soon,” she said.

Elina is one of three blind female journalism students at the university. Faculty head Mohammad Wahid said that they were “energetic and intelligent students and show a great deal of interest in their lessons”.

He called on the government to help further by funding transport so that the students would find it easier to reach the campus.

Officials say that they are trying to arrange extra services for blind university graduates, such as language lessons to help them continue studying abroad.

Jamila Afghan, deputy head of the ministry of labor and social affairs, said, “We are trying to hold language courses for them so that they first learn foreign languages and then get scholarships.”

But even a university education is no guarantee of finding work.

Zahra has a bachelor’s degree but said that widespread social prejudice had prevented her from accessing employment.

“The reason I am unemployed is not that I can’t work or I don’t have a degree. The main reason is that the society and the working environment don’t believe in my and other blind people’s abilities and don’t consider us to be able people.”

Zahra argued that while a blind person might be restricted from some opportunities in life, this did not mean that they were entirely incapable.

With support from the government and other organisations, people like could achieve a great deal.

“A blind person can be a great teacher, journalist, counselor, and politician,” she continued. “Unfortunately, nothing has been done in our country and working conditions have not been created so that blind people can support themselves and not be a burden on society.”