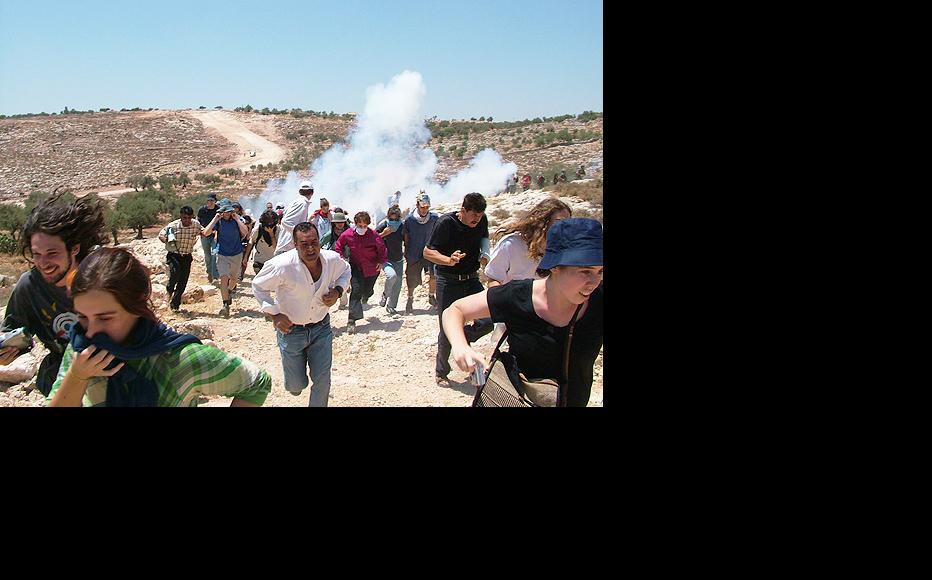 Demonstrators in Bi’lin in 2005 – protests have been staged here every Friday for the last six years. (Photo: Socksasgloves)
The link has been copied

As clouds of tear gas roll through the valley, the pop of percussion grenades mingles with martial music blasting out from speakers on a flatbed truck manoeuvring through the village of Bi’lin.

It’s all great atmosphere for this piece of political theatre, played out weekly between the Israeli Defence Force, IDF, and activists protesting against the route taken by the controversial security barrier, which cuts the villagers off from 2,000 acres of their land.

Every Friday for the last six years, a mixed crowd of Palestinians, Israelis and internationals have gathered in this West Bank village, local leaders and head-scarved women mingling with hip young Israeli anarchists and elderly Tel Aviv liberals. Occasionally, politicians such as Palestinian prime minister Salam Fayyad attend, and sometimes the protest has a carnival air – last year, a group of demonstrators painted themselves blue and donned pointy ears and tails to recreate the anti-colonial film Avatar.

But today’s demonstration has a poignant edge. A week earlier, local teacher Jawaher Abu Rahmah, 36, died after participating in the protest. The Palestinians say she died from the effects of inhaling tear gas; the IDF insist she had a pre-existing condition, perhaps even cancer.

Her brother, Bassem Abu Rahmah, was killed in 2009 when he was hit in the chest by a high velocity tear gas grenade, and demonstrators carry posters featuring photographs of both siblings as they proceed from the village to the security barrier, down a path bordered with tattered face masks and alcohol wipes, the detritus of previous protests.

Many of the Palestinian protesters are wearing stickers in the shape of yellow stars, with the word Palestinian in Arabic. The stars have eight, rather than six points, but the Nazi-era message is as unequivocal as it is offensive to even many of the Israelis taking part in the demonstration.

Israel began building the barrier during the second intifada, arguing it was a measure to keep militants from attacking civilians within Israel proper. The suicide bombings did stop; but critics say the wall’s route, cutting deeply into the West Bank, amounts to a land grab.

The Israeli High Court ruled more than three years ago that the security barrier in Bi’lin needed to be moved. But the army has continued to stall over changing its course.

The more daring amongst the youths venture right up to the barrier to try to damage it, while others begin throwing stones at the soldiers on the other side. The army responds with tear gas, percussion grenades and jets of the noxious skunk spray, which, as one Israeli photographer comments, “smells like 20 rotting bodies”.

With every fresh barrage of tear gas grenades, the crowds surge back up the hill, coughing and spluttering. A Palestinian Red Crescent ambulance ferries the more badly affected to the village; concerned crowds gather round other protesters who temporarily collapse on the sides of the path, limp and choking. A few young men have burned hands from seizing gas canisters and flinging them back towards the IDF troops.

All the familiar faces of the Israeli Left are here. Jonathan Pollak, a founder of Anarchists Against the Wall, leans against a car talking to an Israeli journalist. In a few days’ time, he is to begin a three-month prison sentence for a cycling protest he led in Tel Aviv against the Gaza war. Sarit Michaeli, spokeswoman of respected Israeli human rights organisation B’tselem, stops to say hello, and Arik Ascherman, the head of Rabbis for Human Rights, waves as he lopes by.

And then there are the solidarity tourists, this week including a group from American Jews for a Just Peace on an annual mission to the region.

“It’s easy to talk about the situation here before you actually experience it,” said Alex, 19. “It’s really scary to see people so hurt by tear gas, but they are so brave and inspiring.”

For many, though, this is simply part of the weekend routine. As they trudge back and forth along the path, as clouds of tear gas billow and recede, regulars idly discuss how best to protect themselves from the chemicals, sounding more like they’re swapping recipes than tips on activism.

“Onion is the best,” Mustafa, a middle-aged local, advises a couple of internationals, opening his palm to reveal a shredded handful and demonstrating how sniffing it helps neutralise the effects of the gas.

For skunk spray, more drastic action is needed. “I once got soaked in it and even taking seven baths didn’t help,” he continued. In the end, he had to cover himself in olive oil and lemon, like a chicken.

For all the drama, the protest still provides a rare juncture for Israeli-Palestinian interaction. Most Israelis live far away from the occupation – mentally if not physically – and are able to ignore the conflict as it grinds on, while most Palestinians have no contact with Israelis beyond encounters with soldiers at checkpoints.

After a couple of hours, it’s all over. Some of the Israelis head to East Jerusalem to continue their Friday ritual with a protest against Sheikh Jarrah settlement building, followed by a spot of excellent Palestinian hummus at the Nashashibi cafe where they’re welcomed warmly, despite the lingering cloud of skunk accompanying them.

Palestine
Protests
Connect with us