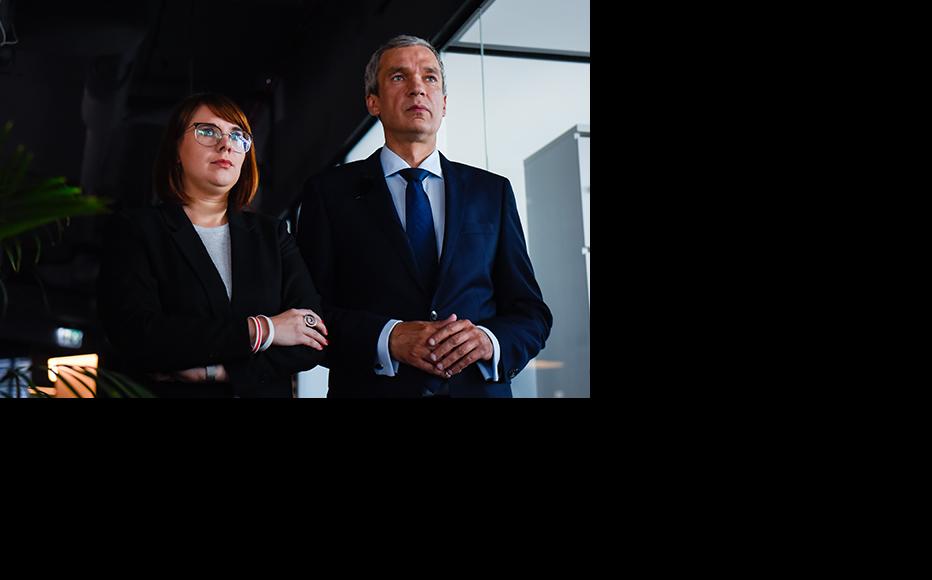 Exiled members of the presidium of the Coordination Council of Belarus, Pavel Latushko and Olga Kovalkova wait to record a video message for Belarusian citizens on September 23, 2020 in Warsaw, Poland. (Photo: Omar Marques/Getty Images)
The link has been copied

Poland is emerging as a hub for Belarus opposition activity, with numerous activists forced into exile there since protests began over the disputed presidential August 9 elections.

Warsaw has been a staunch supporter of the pro-democracy movement which refused to accept Belarussian President Alexander Lukashenko’s insistence that he had won more than 80 per cent of the vote.

Numerous opposition figures, including former minister Pavel Latushko - the most senior public official to openly side with the protestors - have set up a Warsaw office for the Coordination Council, the body created to facilitate a democratic transfer of power in Belarus.

From there, the Council works on strategy, holds press conferences and connects with other exiles.

“We plan trips to see our people in different countries around Europe,” said activist Veronica Tsepkalo, who replaced her husband Valery during the election campaign after he was banned from participating and has sought sanctuary in Poland with the rest of her family. “And we will continue to work for our political programme and our supporters from here, too.”

Opposition activist Olga Kovalkova, also instrumental in the establishment of the Council’s Warsaw office, described how she had been detained by the security services and taken to the border with Poland late at night on September 5.

“When I realized that I was on the border with Poland, I called the Polish embassy. They helped me to get to the other side and this is how I found myself in Warsaw. But it was not my choice,” Kovalkova told IWPR.

Other well-known Belarusians who have also fled their country because of persecution include Tatiana Borodkina, the former host of a television cookery programme, who quit her job in protest at the election results.

After expressing her support for the pro-democracy demonstrations, she began receiving threats of violence against her and her family, ultimately forcing her to leave the country.

“First we went to Ukraine and from there to Poland,” Borodkina said. “Here, in the Warsaw office, I will help the way I can, work in the information sector, but I hope we will return to Belarus soon. I really want to go home.”

Both neighbours of Belarus, Lithuania and Poland have shown strong support for the pro-democracy movement; Lukashenko’s main challenger in the presidential race, Sviatlana Tsikhanouskaya, is now based in Vilnius.

NEXTA (someone in Belarussian) the Telegram channel and independent information source which played a central role in the protests, is based in Warsaw, and many Polish cities have also witnessed popular demonstrations in support of Belarus, along with fundraising initiatives.

Lukashenko has repeatedly accused Poland of conspiring against the Belarusian state since the protests began, threatening to close the border and introduce sanctions.

More recently, Poland put forward an economic aid strategy, nicknamed the Marshall Plan for Belarus, which the European Commission is supporting with the aim of facilitating democratic change.

The Polish government has also pledged 50 million zloty (11 million euro) towards supporting Belarusian civil society and has fast-tracked humanitarian visas for people injured in the protests so that they can access free medical treatment.

Many Belarusians have also crossed the border on their own initiative, ending up in temporary accommodation centres waiting to receive assistance.

Katia, who did not want to give her real name because she plans to return to Belarus after her rehabilitation, was wounded in one of the first days of protests in Minsk.

A grenade thrown towards the crowds of protestors left her legs badly burned and with numerous shrapnel injuries.

“After they took me to the hospital, the police came to my home and took my belongings – laptop, phone, and even my two little white-red-white flags [the historic Belarussian flag which has become a symbol of the protests]. After that, I was asked to come to the police station and they arrested me,” Katia said.

After she was freed, she headed to Poland where she is now staying at a rehabilitation centre with other injured protesters.

Kovalkova paid tribute to the ordinary citizens who have been out on the streets demonstrating since August.

She added, “Every single person that goes out to protest is a leader.”

Giving Voice, Driving Change - from the Borderland to the Steppes
Regime, Democracy, Protests
Connect with us