How Media in Belarus and Russia Joined the Information Battlefield

Both countries have been flooded with incitement alongside deliberate confusion between fiction and historical facts. Infographic on Belarusian media and extremism 1/9. 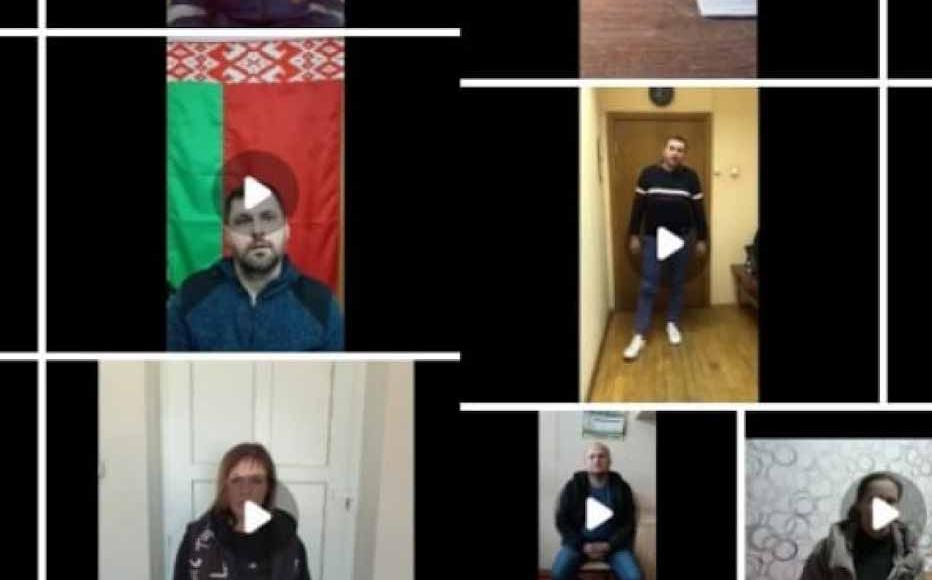 A screenshot of some of the televised forced confessions of Belarus' railway employees detained in March 2022 for their actions in support of Ukraine.
The link has been copied

In September 2021, renowned Belarusian DJ Alexander Bogdanov - known as Papa Bo – gave a televised video confession in which he “confessed” to the possession of drugs and leading protest marches.

The supposed declaration of guilt came after ten days in detention during which officers from GUBOPik, the agency tasked with combating organised crime and corruption, threatened him with rape.

“They threw me on the floor and started kicking my ribs and head, but I was still refusing to obey, [as I was] aware of the six years sentence that I would be given, at least, for such a confession,” the 36-year-old told IWPR.

“Then they said that at work they were given packs of condoms and asked if I knew the reason. Without waiting for an answer, they began to put a condom on a baton and demonstrate it to me, lying on the floor. After this demonstration, I agreed to read the text they had given me.”

Televised forced confessions of government critics have been on the rise ever since Belarus president Alexander Lukashenko ordered the massive repression of street demonstrations denouncing the rigged vote of August 2020. The forced confessions have particularly increased in the wake of Russia’s invasion of Ukraine.

They are extorted by the GUBOPik, which operates under the auspices of the ministry of interior, and usually show detainees admitting receiving money from foreign funds or preparings acts of terror. Others disclose details of their private lives they are supposed to be ashamed of.

Pavel Sapelko, a lawyer with Viasna, Belarus’ leading human rights group which was awarded the 2022 Nobel Peace Prize, notes that the recording of such videos violates several norms of Belarus’ constitution let alone the international covenant on civil and political rights.

The intended effect is one of fear, explained a teacher from a small town in the country’s south.

“Such confessions are aired in news programmes, in prime time, to ensure maximum coverage, together with numerous patriotic propaganda videos and slogans about friendship with Russia,” the 30-year-old said, speaking to IWPR on condition of anonymity. “TV is not the most popular mass media, but many Belarusians do watch it, more like a background, while cooking or having evening meals.”

“I think that public shaming plays a role: everyone knows that if you are caught saying bad things about Lukashenko or police, or leaving a critical comment online, you will appear on screen and your life will never be the same. Due to the stigma, employees will refuse you a job and your neighbours might limit communication with you. Such videos clearly teach a lesson: you have to be careful,” the teacher concluded.

People from a wide range of backgrounds are targeted. Bogdanov was arrested with designer Maxim Kruk and cultural events’ organiser Yelizaveta Neumuarzhyckaya.

On March 30, state-run media broadcast 38 videos in one day alone, all from railway employees who confessed to have subscribed to a banned Telegram channel.

The authorities consider the Community of Railway Workers of Belarus channel to be an extremist organisation; subscribers can be sentenced to up to seven years in jail under Belarusian law.

While a relatively new phenomenon in Belarus, televised shamings have been widely used in Chechnya by governor Ramzan Kadyrov as a strategy to eradicate dissent. In the Russian Federation’s republic, public apologies are largely broadcast to save the offender’s family’s reputation, experts note, who risk losing their social status and facing ostracism.

Belarus, however, does not have a similar concept of honour and collective responsibility, and confessions under duress are televised to intimidate and impose self-censorship.

“In modern times, such videos are similar to public executions or punishments widely used in the Middle Ages,” a Belarusian psychologist specialising in post-traumatic stress disorder (PTSD), told IWPR on condition of anonymity. “They are fabricated to show a person breaking down, [their] values deconstructed ​​and suppressed in response to coercion. Watching another human being suffer is a traumatic factor in itself: despair, anger and fear are those emotions that these videos are probably aimed at activating.”

The GUBOPik and other law enforcement structures are also a target audience, Bogdanov told IWPR.

“As far as I know, all the security forces members, from ordinary patrol officers and cadets to high rank officers, have to subscribe to pro-government Telegram channels where videos of forced confessions are regularly downloaded,” he explained. “They send their colleagues a signal like, ‘We are doing our job, men!’ Moreover, such videos also show human rights activists monitoring these channels that no one will escape ‘justice’. I see it as an intimidation campaign and a rude demonstration of superiority and impunity.”

It is difficult to evaluate the impact that these confessions have on Belarusians. In 2019, a nation-wide study conducted by the Minsk-based Institute of Privatisation and Management showed that mistrust is widespread in Belarus’ society. About 51.9 per cent of the respondents said they have a low level of trust in general, and about one fifth considered media to have a negative impact on people’s lives with family being their only circle of trust.

To limit Belarusians’ access to independent information in the wake of the August 2020 unprecedented protests, Lukashenko’s regime proceeded to further stifle the press, with wide-scale detention of journalists and criminal charges pressed against bloggers and subscribers of sources labeled extremist.

Instead, Belarusians are bombarded with loud patriotic slogans and videos of public humiliation on a daily basis.

Bogdanov said that he hoped that the majority of people could see through the regime tactics.

He added, “No sane person will purposefully watch these videos, and any unbiased individual understands that those were recorded under psychological and physical pressure.”