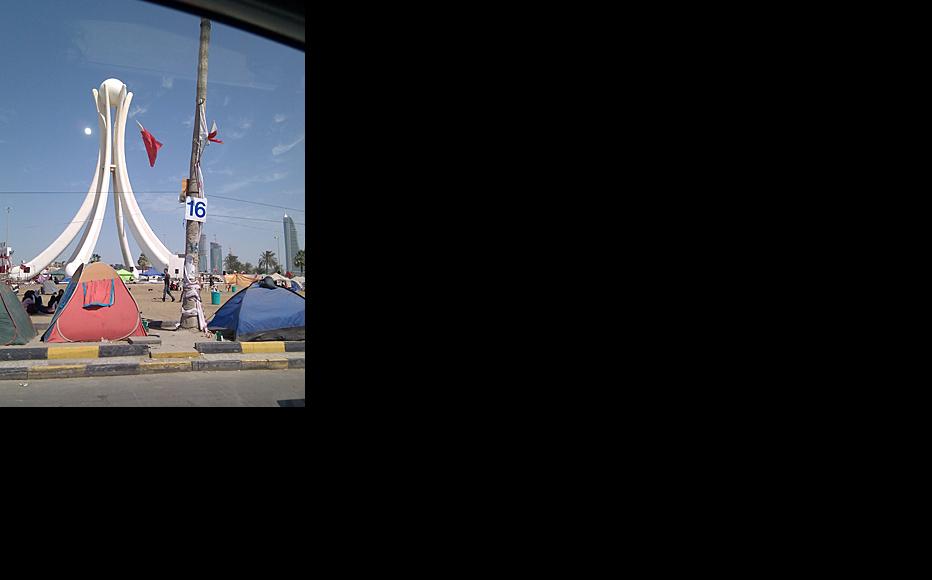 Protesters camped out infront of Pearly square on March 4, 2011, days before the demonstration was broken up. (Photo: Justin Ormont/Wikimedia)
The link has been copied

The way the authorities in Bahrain are responding to the protests that have crippled this island kingdom since February 14, 2011 shows they are not short of means to suppress demands for more rights and freedom.

When the people decided to go to the streets to pressure the regime into making genuine political reforms, doctors, teachers, taxi drivers, businessmen, lawyers and people from all walks of life joined in support of the protesters’ cause. The regime was taken by surprise and it suddenly realised that thwarting the formal opposition was not enough, and that it needed to do something more drastic to deter its critics.

More than 2,000 public servants, doctors and workers from both the public and private sectors were dismissed from their work. Thousands more men, women, minors, doctors, nurses and journalists were arrested, interrogated and tortured in custody.

According to reports, at least four people have died under torture in prison. To spread fear, checkpoints were set up to intimidate. Security forces carried out night-time raids on villages to terrorise. The main Salmaniya medical centre and private hospitals were raided to round up wounded protesters and put them in jail. A state of terror has gripped the island since the violent crackdown in March on the Pearl square protesters. The intention has been very clear; to silence everyone.

Within this context and against this gloomy backdrop, the regime hunted down students who took part or were suspected to have taken part in the demonstrations. They were called Bahrain university for questioning. Those found “guilty” of so-called offences were suspended for one year or expelled from university for good, and referred to the police. The offences ranged from being photographed at a demonstration, holding a banner or waving a flag, blogging, tweeting or posting a comment on Facebook.

One of the affected students said that there were no set rules for handing down the “disciplinary” actions against them. No one knew exactly why they was suspended or expelled from the university, and students were not able to get copies of their academic credits.

Without these papers, expelled students can’t transfer to a local private university in Bahrain or any other university abroad for the upcoming year.

Bahrain university also suspended the academic year for one month after the eruption of violent disturbances at the main campus on March 13. There are two conflicting claims as to who was behind these events. The government side accused the protesters, while the opposition claimed that pro-government thugs had caused the chaos. Irrespective of where the truth lies, it is certain that students whom the regime thinks are disloyal will pay the price.

And the first thing the university administration did after the resumption of studies was to enforce maximum-security procedures which resulted in long queues and two-to-three hour delays to the start of classes. All students who had not been expelled were also required to sign an undertaking pledging complete loyalty to the leadership of the Kingdom of Bahrain as represented by His Majesty King Hamad bin Isa Al Khalifa.

By signing the loyalty document, each student also undertook not to organise or participate in any activity within or outside the campus which was not related to student or academic matters. It also noted that the student only paid six per cent of the total cost of tuition, with the state bearing the remaining cost, an apparent reminder of a supposed debt of gratitude. Not signing this document was deemed to be an indication that the student did not wish to continue his or her studies at Bahrain university.

Students were also expelled from Bahrain polytechnic, which on April 6 was put under the direct control of the ministry of education by a royal decree.

“The school was a great institute until it was put under the control of the government,” said Khalil Salman (not his real name) a second-year business student who was recently expelled.

Salman said he was called in for questioning because of a comment he made on Facebook that said “Not Shia, Not Sunni… Just a secular republic”. Now, he said, he was probably going to forget about continuing his education and find work instead.

“They expelled my friends too, I don’t care anymore and I’m going to look for a job,” he continued, adding with bitterness, “They no longer provide a good education anyway.”

According to a statement released earlier this month by the youth affairs office at Wa’ad, a leading liberal opposition party, around 413 students are now in limbo; unable to return to their studies, transfer to another university or find a job commensurate with their almost-completed academic qualification.

Some have described this type of punishment as being part of a deliberate strategy to prevent or delay as much as possible any opportunity for this group of students to have an education or a career. The regime's response to their demands for a better living was to drive them further into a worse condition.

There were students who escaped censure and have continued with their studies. “They expelled many of my friends and even my brother but not me,” said Shareefa (not her real name) who attended the Pearl square protests several times, and joined the demonstration organised by the students. “Apparently they did not have any picture of me in those places, so they didn’t call me for questioning.”

Meanwhile, others are finding creative ways to continue their education. Some architecture students have joined an initiative spearheaded by a faculty alumnus who set up a makeshift training institute immediately after the students were expelled. The concept of the institute is based on downloading courses from the internet which are then taught by volunteer teachers.

If teachers are not available, senior students who have completed similar courses do the job. A student who helped the founder set the institute up from scratch said that it was giving him real-life experience that the university had failed to provide, adding that the founder was using all his contacts and connections to provide architecture-related training or temporary jobs for his students.

So all hope is not lost. This training institute is an embodiment of the solidarity between all parts of society that rallied at Pearl square - a manifestation of the determination and perseverance to build a better future for the country, despite the continuing plight of those who refuse to be silent.

Fadel Mohammed is the pseudonym of a Bahraini journalist now working outside the country.