A Bad Year for Human Rights in Azerbaijan

"We have never seen so many political prisoners in an election year" - former presidential candidate.

A Bad Year for Human Rights in Azerbaijan

"We have never seen so many political prisoners in an election year" - former presidential candidate. 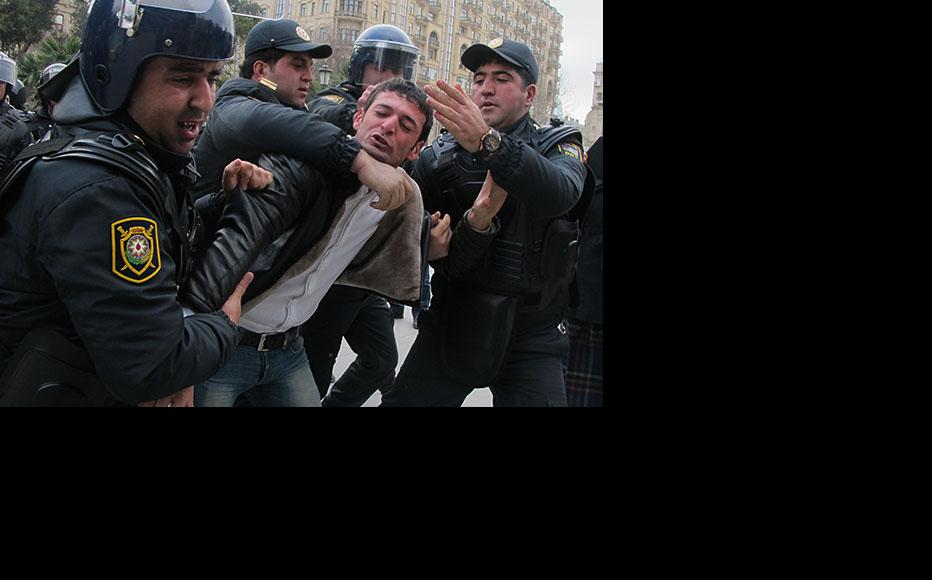 Riot police arrest a protester in Baku, January 2013. (Photo: Samira Ahmedbeyli)
The link has been copied

Human rights activists and opposition politicians in Azerbaijan say 2013 was marred by even more abuses than past years.

Journalists, protesters, opposition party members and other critics of the government were arrested and jailed in unusually large numbers. Many believe this reflected efforts by the government to secure an untroubled election victory for President Ilham Aliyev. In the event, Aliyev roundly defeated joint opposition candidate Jamil Hasanli in the October presidential ballot.

It was a year marked by demonstrations, starting in Baku in January where young people turned out to protest about deaths among army conscripts. The same month, stallholders took to the streets to object to rent hikes at the Bina shopping mall. Police broke up both demonstrations, and used plastic bullets against the Bina stallholders.

Also in January, local residents in the town of Ismayili went on the rampage after a fight between the district governor’s son and a taxi driver. Trials of participants are ongoing, including those of activists from the opposition Nida youth movement, and Yadigar Sadiqov, an adviser to the head of the Musavat party.

“These courts are basically closed to the press. The processes take place in small rooms so that there’s no space for people coming to observe them. The judges reject all the defence’s applications,” Rasul Jafarov, head of the Human Rights Club, told IWPR.

Miralim Huseynov, head of the Study of Democracy group, said that although the authorities had allowed opposition activists to hold public meetings in Baku in the three weeks preceding the presidential election, there was no such license outside the capital.

“Before and after the election, neither opposition groups nor anyone else was accorded their right to freedom of assembly. The treatment of anyone who organised actions that the government didn’t agree with was very harsh,” Huseynov told IWPR.

Such restrictions are nothing new. On October 3, the European Court of Human Rights awarded damages of 11,000 euro plus expenses to Surayya Tahirova, who was hospitalised after being beaten by police officers at a 2005 protest against parliamentary election results.

“It’s a good precedent,” Asabali Mustafayev, head of the Democracy and Human Rights centre, said of Tahirova’s case. “The European court has received many complaints about violations of the right to free assembly. Decisions will soon increase in number.”

It has been such a fast-moving situation that Amnesty’s Europe and Central Asia Director John Dalhuisen has said he was overwhelmed just trying to keep track of events.

“The persecution is so widespread and frequent it’s difficult to assess just how bad the current situation really is,” he said in a statement in October. “We have already adopted no fewer than 14 people as prisoners of conscience. These people are currently behind bars solely for expressing their views or taking peaceful action.”

Human rights organisations have different figures for the total number of political prisoners. The Human Rights Club, the Institute of Peace and Democracy, and the International Association of Legal Studies list 142 names including journalists, bloggers, youth and human rights activists and opposition politicians.

The Human Rights Monitoring Group said there were 11 on the eve of the October election. Two of these, Farhad and Rafiq Aliyev, brothers who were economy minister and head of the Azpetrol concern, respectively when they were arrested in 2005 on suspicion of plotting a coup, were among 153 people freed in a prison amnesty in October.

“Of course we welcome this amnesty,” Saida Gojamanly, director of the Bureau for the Protection of Human Rights and Rule of Law Legality. “We also welcome the fact that Rafiq and Farhad Aliyev were among those amnestied. Their cases have reverbated widely, and they were recognised as political prisoners not just by us but also by international organisations.”

According to Human Rights Watch and Amnesty International, 2013 was a tough year for journalists, with ten arrests. No one has faced punishment for beating journalists in several different incidents over the course of the year. Nor have police tracked down the murderers of journalists Elmar Huseynov and Rafig Tagi, killed in 2005 and 2011, respectively.

“Intimidation, violence and media clampdown – free expression in Azerbaijan is under siege. The country’s record on free expression has undergone a marked deterioration in the run up to its presidential election,” the UK-based group Index on Censorship said in a report in October. “It is important to note that the country is due to assume the chairmanship of the Council of Europe’s Committee of Ministers in 2014, while it fails to comply with its obligations under the European Convention on Human Rights.”

On November 24, President Aliyev met editors of major news organisations for the first time in a decade, and warned them to be on the alert for external enemies. He advised them not to publicise criticism “that serves as propaganda against Azerbaijan”, and asked journalists writing for foreign publications to reject criticism rather than confirm it.

Ali Hasanov, head of political affairs in the presidential office, condemned local non-governmental organisations which passed on allegations of human rights abuses to the foreign media.

“We think there are no political prisoners in Azerbaijan,” he told the APA news agency. “There are people who have been arrested for specific acts. Some of them were engaged in political activities, but those activities do not protect them from answering for their illegal actions.”