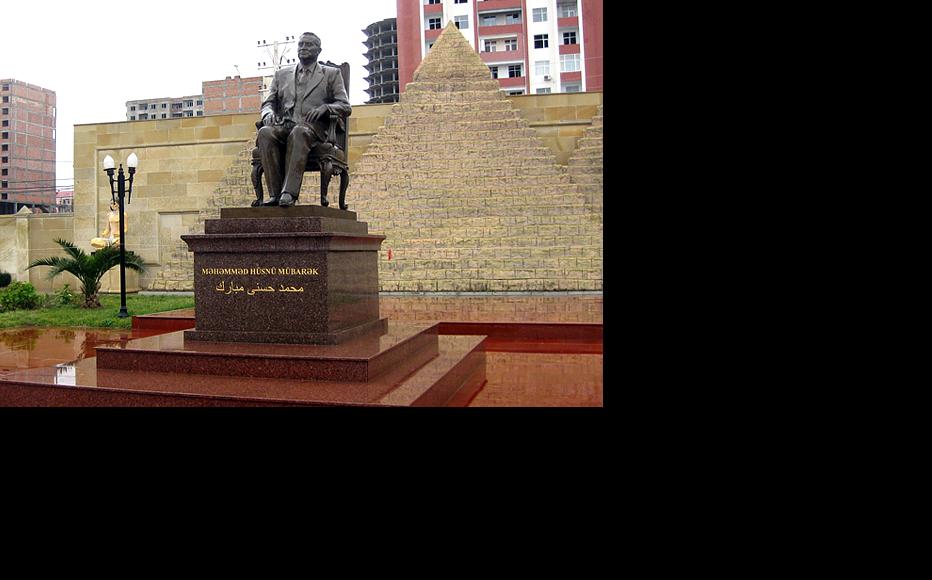 A statue of Egyptian president Hosni Mubarak has taken centre stage as Azerbaijani opposition leaders compare the situation at home to the conditions that sparked mass unrest in Cairo. (Photo: Samira Ahmedbeyli)
The link has been copied

As Hosni Mubarak’s grip on power faded in his own country, opposition leaders in Azerbaijan stepped up calls for a statue of the Egyptian president to be removed from their capital.

The opposition leaders drew comparisons between the situation in their own country and the wave of popular protests in Egypt, saying events in Cairo should serve as a warning to other authoritative regimes.

The statue of Mubarak was erected in 2007 in Khirdalan, a suburb of the Azerbaijani capital Baku, and a local school was dedicated to the Egyptian leader’s wife at the same time.

“As if we don’t have enough idols and dictators of our own,” Panah Huseyn, a member of parliament until the November 2010 election, said in a statement.

The opposition Democratic Party called for the Mubarak statue to come down.

“Leaving a monument to the Egyptian dictator in place does no honour to Azerbaijan, and the authorities must soon decide to dismantle it,” said a statement by the party, issued as protests in Cairo got under way.

Police are currently mounting round-the-clock at both the monument and the school.

“Events in Tunisia and now in Egypt must serve as an example or rather a warning to all dictators and authoritiative regimes which take no account of the will of the people,” the Democratic Party said. “At the same time, the people tormented by these regimes must realise the need to constantly pursue the fight for democracy and freedom.”

Ali Kerimli, head of another opposition group, the Popular Front Party, also warned of a repetition of the popular revolutions in Egypt and Tunisia.

The opposition movement in Azerbaijan has in the past tried to mount street protests to challenge the rule of President Ilham Aliyev.

During a parliamentary election in 2005 and a presidential ballot in 2003, police dispersed tens of thousands of protestors using tear gas, truncheons and water cannons.

No election in Azerbaijan has been deemed democratic by international observers since Ilham's father, the late Heydar Aliyev, came to power in the early 1990s.

Supporters of the Aliyev administration dismissed the opposition campaign against the statue. Miri Qambarov, formerly head of the official Azerbaijan-Egypt Inter-Parliamentary Friendship Group, said the monument should stay where it was.

“Many of the [Egyptian] rebels who took to the streets to cheer have no idea why they are protesting, or what they’re protesting against,” Qambarov said. “Similarly, some of our opponents who are demanding that the monument be dismantled are just using this opportunity to engage in meaningless, populist speeches.”

Even so, a new focus on corruption suggests the Azerbaijani government may be drawing some conclusions from the Egyptian unrest.

On January 27, the head of the presidential administration, Ramiz Mehdiyev, chaired a meeting of the national anti-corruption commission and promised that offenders would be penalised. Afterwards, a number of employees of various government ministries and committees were dismissed on corruption charges.

Corruption is in endemic in Azerbaijan, which the international watchdog Transparency International listed in 134th place out of 178 countries in its annual corruption ranking. Egypt was given a better score, at 98.

The sudden revival of interest in corruption was met with some scepticism in Azerbaijan.

“Although this state of corruption has persisted for a long time, not a single official has spoken about it,” Eldar Namazov, a political scientist and one-time adviser to Heydar Aliyev. “Former economic development minister Farhad Aliyev [dismissed in 2005] was the only one to take the initiative, and the result is that he’s now in prison.

“We can therefore say with confidence that the government’s recent dismissal of some staff members for corruption is a reaction to events in authoritarian Arab countries.”

Zardusht Alizade, head of the Caucasus School of Journalism and a leading political analyst, said developments in Egypt had been deeply disconcerting for the Azerbaijani authorities.

“They therefore decided to put on a show, ostensibly mounting a ferocious attack on corruption, rather than taking real steps in this direction,” he said.

However, Alizade expressed doubt that Azerbaijan was ripe for an Egyptian-style revolt.

“It’s true the opposition has become more active, but at this point rebellion or revolution is impossible,” he said. “Until authoritarian regimes are overthrown in Russia, Armenia, Azerbaijan and Belarus... overthrowing the dictatorship will simply be impossible.”

Samira Ahmedbeyli is a staff writer for IWPR in Azerbaijan.