Amid falling oil prices, Baku has abandoned the manat´s peg to the dollar and let the manat tumble.

Amid falling oil prices, Baku has abandoned the manat´s peg to the dollar and let the manat tumble. 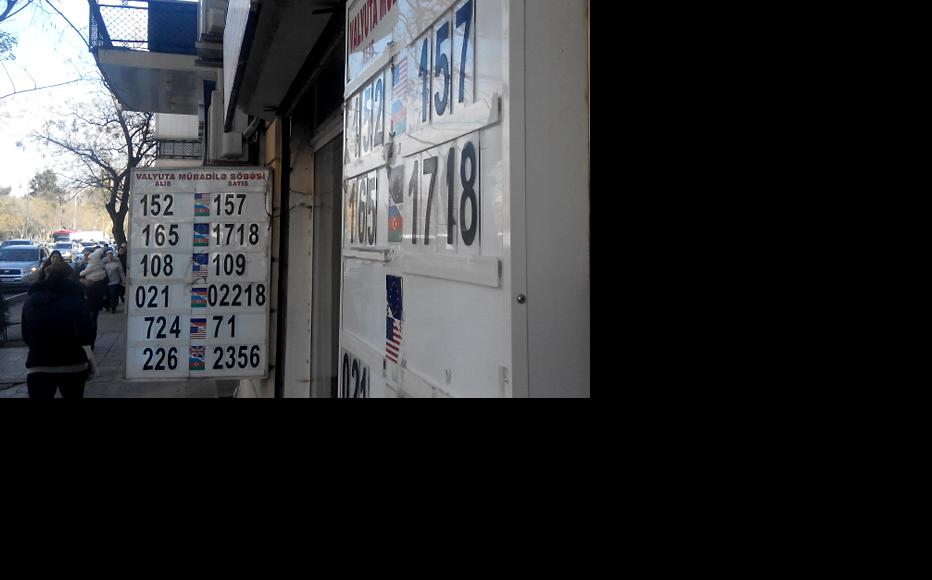 Azerbaijan has limited currency exchange operations following the steep devaluation of the national currency that has sparked protests around country.

Azerbaijan’s Central Bank switched to a floating rate for the national currency on December 21, 2015, causing the manat to lose half its value to the dollar.  This was the country’s second devaluation last year; in February, the manat fell by one-third after the first devaluation.

Ever since, it has been very difficult for people to buy dollars in Azerbaijan.  A new round of panic set in on November 14 when the Central Bank banned independent currency exchanges from operating.  Hard currency could only be bought at banks, tourist facilities and airports.

However, on January 14 and 15, banks refused to buy or sell dollars.  One exception, AzerTurkbank, allowed dollars to be bought at 1.60 to the dollar and sold at 1.63 manats. The official exchange rate on January 15 was 1.57 to the dollar.

“I only heard on Friday after lunch that AzerTurk is selling dollars,” said Elshan, who sells home appliances.  “I came to the bank at three pm, there was already a huge line and the police officer told me that their limit was 500 people per day.  Then I found another branch of the bank, but it was the same picture there.”

There have been a series of protests across the country over price hikes, devaluation and deteriorating economic conditions, which were dispersed by the police.  Dozens of people have been detained.

“The state is actually wreaking havoc with its restrictive measures since it essentially stimulates a stir around the dollar,” said economist Natiq Jafarli.  “In addition, we can see with our own eyes that it does not have an anti-crisis strategy.  We have become convinced of that because of the quick cancellation of orders issued earlier.”

As an example, the economist cited the cancellation of the established limit of 10,000 dollars on goods imported into the country as well as the lifting of the ban on the purchase of alcoholic beverages for cash.

“Now, as soon as an Azerbaijani has manats, he rushes to exchange them into dollars and leaves himself only a little bit for daily expenses,” he said.

As oil prices slumped to the lowest in 11 years, the Central Bank decided to adopt a floating exchange rate regime “in an attempt to improve the balance of payments, maintain an adequate level of strategic reserves and improve international competitiveness of the national economy,” the bank said in a statement.

Immediately after the devaluations in February and December 2015, many exchange offices closed their doors. The few that remained open only bought dollars and did not sell them.

Tamara, an 80-year-old pensioner, has been saving money towards her funeral for many years and had amassed what she thought was a considerable sum of 5,000 manat.

Following the devaluation, she asked her nephew to exchange the money into dollars at the official rate, but he was unsuccessful.

“I am very afraid that everything that I have saved for all those years will soon be devalued,” she said.

Following the devaluations, many shops closed for two days and after they re-opened, people scrambled to buy as many items as they could before prices were adjusted.  A range of daily essentials, such as flour, sugar and eggs, disappeared from the shelves.

Meanwhile, new price tags were being attached to goods.  Some shops installed security at the entrance and prohibited the taking of photographs.

“I spent two hours going around pharmacies trying to find my medication,” said Russian teacher Valida.  “I had a stroke and the doctor prescribed me lots of drugs to improve blood circulation.  … Pharmacies were either closed or had removed their medicines.  I shudder to think how much they will cost when they will return them to the shelves.  I already spend nearly 50 manats every month on medication.”

Following the December devaluation, the black market began to flourish.  Although the exchange office in Baku was closed for several days, employees stood outside and offered to exchange money for passers-by at the rate of two dollars per manat.  At that time, the majority of the banks did not exchange any dollars into manat.

“The reason for the black market is the inability of the state to communicate with society,” said Natig Jafarli, an economist and the executive secretary of the opposition Real movement. “It’s not only confidence in the manat that has been lost, but also in the statements of officials as well as in the banking sector.”

The situation has been aggravated by people trying to withdraw their dollar savings from their deposit accounts, he said, which removes hard currency from the banks.  Jafarli said that “people are seriously worried that the banks will collapse”.

“On the one hand, the Central Bank announces a floating rate, on the other it announces a new price of the manat,” said Azer Mehdiyev, head of the Centre for Assistance to Economic Initiatives.  “This is somewhat contradictory and only increases the distrust in the state, and hence the panic.”

The anxiety in business circles is further reinforced because all decisions in Azerbaijan are taken behind closed doors.

“There is no public debate and, therefore, we cannot judge the motives of certain actions and ultimately predict the next steps,” Mehdiyev said.  “Everything becomes very unpredictable.”

Jafarli said he had repeatedly suggested that the manat be gradually devalued, so as to avoid a sudden jump which blights the business environment and banking in particular.

“For years, our government lived in conditions of oil prices around 100 dollars.  It suited them and they did not even think about reforms,” he said.  “Now it has turned out that even in conditions of crisis they do not go for these reforms.”

Jafarli said that he believed that the state would continue to devalue the national currency through such methods, which could lead to the bankruptcy of the country’s largest banks as well as to unemployment and general poverty by the end of this year.

For their part, Baku has insisted that the devaluation was triggered by the difficult economic situation in neighbouring countries and the drop of the oil price. It also cited the desire to support domestic producers and to counter decreasing production, which was due to the stable and high exchange rate of the manat.

“In this situation, a ‘free floating’ rate of the manat was inevitable,” Ali Hasanov, presidential aide for public and political affairs, told the state news agency Azertac.

“Azerbaijan is an oil country,” he continued.  “Countries such as ours cannot but take into account the sharp drop in oil prices, which is the main source of income of the state budget.  The prices on oil and oil products have reduced threefold since early 2015.  This means that Azerbaijan's revenues reduced threefold.”

Vafa Zeynalova is a staff writer with IWPR.

Azerbaijan
Economy, Protests
Connect with us