They have proof they paid for their land, but the authorities say official documents don't mean a thing.

They have proof they paid for their land, but the authorities say official documents don't mean a thing. 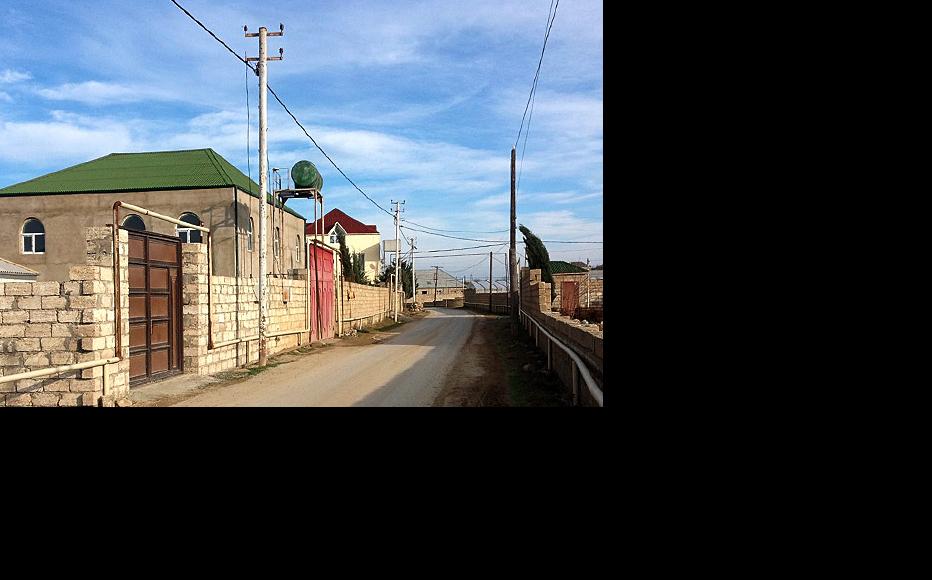 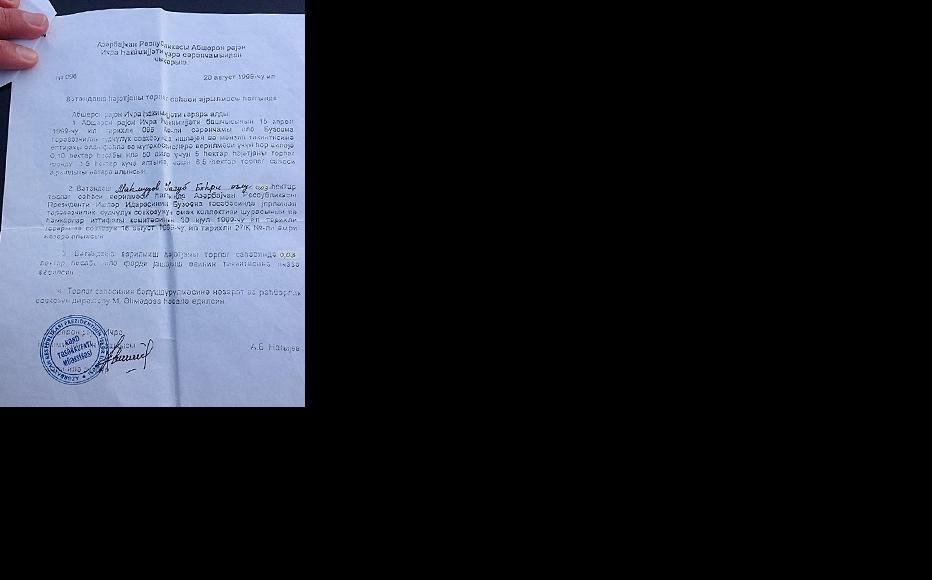 One of the official documents assigning land to residents. (Photo: Aynur Elgunesh)
The link has been copied

Although the 10,000 homes in the village of Shagan near the Azerbaijani capital Baku might seem hard to miss, they are not on any official map.

Government mapmakers say the homes are not “legal” so they cannot be drawn. Yet the people who have lived here – about 30 kilometres outside Baku, on the Absheron peninsula – for a decade or more insist they have proof they bought the land legally.

Residents of Shagan have worried always lived in fear of eviction, and those fears were heightened two weeks ago when President Ilham Aliyev’s office issued a press statement that they would have to leave their homes sooner or later.

Originally part of a Soviet farm that was broken up after Azerbaijan became independent in 1991, the land here was transferred to the presidential administration, which sold it in plots to the present residents. But after building their own homes, the majority have yet to secure full proof of ownership.

Local resident Elnur Malikov says the homeowners have documents of sale both from the presidential administration’s department for general affairs, as well as from the local authorities for Absheron district.

“Despite that, they won’t give us the excerpts from the land register which we need to notarise the transaction, so we cannot establish our right to the property,” he told IWPR.

Malikov said that since building their homes, the residents had paid for public utilities to be laid on out of their own pockets, and now paid their electricity, gas, water and phone bills.

“We’ve applied everywhere,” he continued. “I personally attended a meeting with the head of the presidential administration’s department for general affairs. I was told the documents in our possession carry no legal weight.”

Staff at the general affairs department told IWPR that the lands still belonged to it. Asked why, in that case, the documents of sale carried their official stamp, they declined to reply.

Hidayat Aliyev bought his plot in Shagan ten years ago and built a house on it.

“Now they tell us our documents are a fiction and that we don’t have ownership rights to our own home,” he told IWPR.

Aliyev recalls a collective letter that residents sent to President Ilham Aliyev some years ago.

“We wrote that if our documents were a fiction, they should launch a criminal case. After all, we didn’t create them ourselves, we got them from figures in positions of authority. Those people should be held accountable and return the money we paid for the land and spent on building homes, laying on communications and all that,” he said. “But we never got a reply.”

In 2011, President Aliyev ordered officials to create mechanisms to allow people to acquire legal title to the many still unregistered homes in Baku. Over 500,000 buildings in and around the city fall into this category. This led to a bill that if enacted, would address these issues. But it has yet to come before parliament.

According to Chingiz Ganizade, a member of the parliamentary commission that drafted the law, “It’s unclear when this bill will be debated in parliament.”

Because of the legal limbo, people in Shagan fear that they could be evicted at any moment, as has happened in other “illegal” settlements.

“They knocked down dozens of houses in Sulutepe and other settlements, and those dispossessed people were unable to do anything about it. They didn’t even get compensation,” said Shagan resident Amina Malikova. “We don’t want the same thing to happen to us.”

IWPR asked lawyer Fariz Namazov for his views on the validity of the Shagan residents’ claim. He said that since they bought the land in a fair transaction with stamped documents to prove it, it was incorrect to suggest they were illegal squatters.

“Even if the [official] agency didn’t have rights to sell the particular piece of land, the person who bought it does not bear any responsibility for that. He has placed his trust in a document issued by an official,” Namazov said.

Muzaffar Bakhishov, an expert on land affairs in Azerbaijan, says the confusion over ownership dates back to the post-Soviet distribution of state assets.

“In 1996, after the land reform act was passed, land was divided into three categories – 23 per cent went to municipalities, 19 per cent was assigned for private ownership, and the rest remained with state institutions,” he explained.

The division led to situations where a municipality might sell an area of land to which it did not have 100 per cent legal title.

But as Bakhishev pointed out, “Members of the public don’t have to know which plot belongs to whom. They hold a document from an official institution. So it isn’t the individuals deceived [in this manner] who must bear the responsibility, it’s the institutions that have deceived them.”

Garib Mammadov, head of the government agency for land and cartography, said the reason why Shagan did not appear on any map was that in the eyes of the law, it did not exist.

“If it is state land that’s being leased to members of the public, the local authorties need to issue a directive. If it’s municipal land, the directive has to come from the local municipality,” he said.

Aynur Elgunesh is editor of the Var.az website in Azerbaijan.