Azeris angry about the arrival of illegal workers at a time when they are struggling to find jobs.

Azeris angry about the arrival of illegal workers at a time when they are struggling to find jobs. 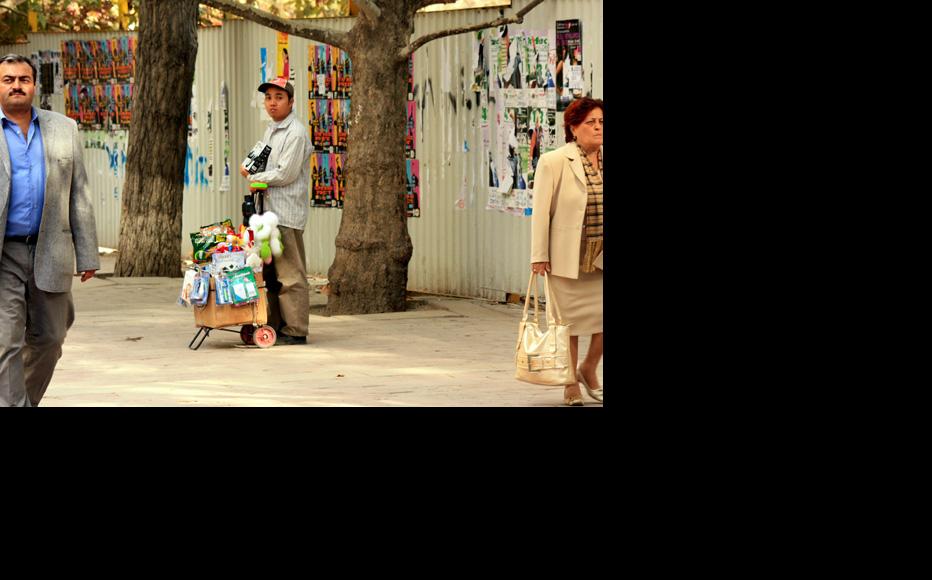 Chinese street trader in Baku. (Photo: Abbas Atilay)
The link has been copied

Azeri workers complain that illegal Chinese immigrants are taking their jobs, and officials are failing to halt the influx.

“The number of Chinese coming to Azerbaijan to work increases with every day,” said Alovsat Aliev, head of the Azerbaijan Centre of Migration, a non-governmental group that studies migration issues.

“Five or six years ago you would only meet Chinese people in Baku and Sumgait, and they would only be selling cheap goods on the street. Now, they are working in different sectors and all over Azerbaijan, in the most remote places. A few dozen weddings between locals and Chinese people have already been registered.”

IWPR looked for Chinese workers in Baku, and met Lee Yang almost immediately. She was selling watches, toys, puppets and other cheap goods as she walked along. She was slim with long hair under a red cap, and wore jeans, but spoke almost no Azeri or Russia, just the words for “how much”, “price” and “manat”, the name of the local currency. She showed numbers on her fingers, and it took her a long time to discover that we wanted to know her name.

IWPR was not, however, able to ascertain how she got to Azerbaijan, but Aliev said many Chinese workers here had been forced out of Russia.

“The flood of Chinese into Azerbaijan is mainly connected to the toughening migration policy in Russia. They lose their chance of living there, so the Chinese move to Azerbaijan where the laws on migration are not so tough. And also, I am convinced that high-ranking officials allow the existence of an illegal, cheap workforce like the Chinese, otherwise they would not be able to live and work so freely here,” he said.

“I worked in Volgograd, in Russia, for a long time, on a building site. They offered us work in Baku and I came with [a big group]. Soon I will have been here for two years,” he said.

“We send about 80 per cent of the salary to our families, and the rest is enough for us. We don’t have to pay for accommodation, and most of us don’t drink or smoke – 50-70 manats is enough for food for one person for a month,” he said, adding that they mainly eat frozen fish, rice and vegetables.

He did not want to answer questions relating to his work permit or registration, and the director of the company on whose building site he was working, had his secretary say that he did not wish to speak to IWPR.

The authorities deny they are allowing illegal immigrants to live freely, but admit they are struggling to cope with the scale of the influx. Arzu Rahimov, head of the state migration service, told reporters on September 29 that some 8,000 cases of illegal immigration had been identified so far this year, with 400 being from China.

“These 400 deported people are just the tip of the iceberg. There are thousands of illegal Chinese in Azerbaijan, and we need to resolve this problem quickly. In a country where there is not work for local citizens, an influx of workers from abroad could cause serious social problems,” he said.

Opposition politicians have pounced on the government’s slowness in reacting to the arrival of the Chinese, and have picked up on the anger of ordinary Azeris.

“The authorities must halt this flood of labour migrants into the country. There are many unemployed people in the country as it is. These foreigners deny our citizens their last hope to earn money, and we must not allow this,” Panah Huseyn, a member of parliament from the Musavat Party, said.

Wages have been badly affected by the global financial crisis, and many workers are angry to see foreigners working at such a time.

Sabir Feyziyev, a 52-year-old working on a building site in the village of Bailov near Baku, said that when they started the project five years ago, all the workers were Azeris.

“We used to get 800-1,000 manats a month. Two years ago almost all the qualified local workers were sacked, and they brought in these Chinese. Only a few specialists like me were kept on, and our salaries were halved. I get a maximum of 500 manats now,” he said.

“This is because these Chinese do the most difficult work for pennies.”

Sabuhi Mammadli is a freelance journalist.