Azerbaijan-Armenia: No Meeting of Minds

Presidents take a step forward by meeting face to face, but fundamental positions on Karabakh look as immovable as ever.

Azerbaijan-Armenia: No Meeting of Minds

Presidents take a step forward by meeting face to face, but fundamental positions on Karabakh look as immovable as ever. 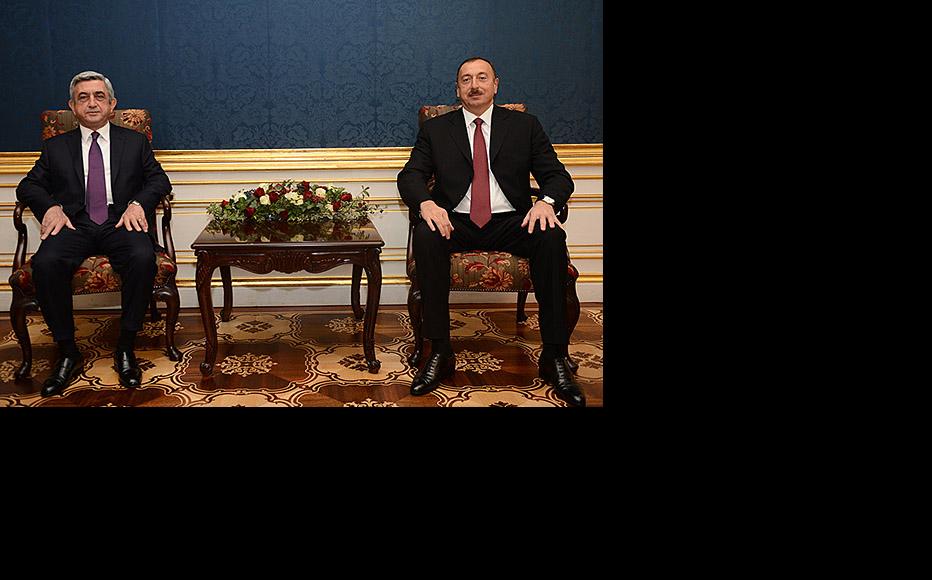 While the first meeting in two years between the presidents of Armenia and Azerbaijan is an important step in itself, subsequent statements by officials have underlined how little substantive progress was made.

Azerbaijani leader Ilham Aliyev and Armenia’s Serzh Sargsyan discussed the Nagorny Karabakh conflict at a meeting in Vienna on November 19.

The talks process on Karabakh is being mediated by the Organisation for Security and Cooperation, via the Minsk Group chaired by France, Russia and the United States. There has been little movement towards a settlement since the conflict ended in a truce in 1994.

The Armenian-run administration in Karabakh says it will never give up its claim to independence, while Azerbaijan insists that in any solution, it must regain control over its sovereign territory.

Sargsyan and Aliyev last met in January 2012. Then, too, they failed to agree on a way to move the stalled negotiations process forward.

Azerbaijani foreign ministry spokesman Elman Abdullayev gave a cautious welcome to the latest meeting, while stressing that no concessions were being made.

“The meeting of the presidents of Armenia and Azerbaijan which took place in the Austrian capital is definitely seen as a positive step,” he told IWPR. “The question of the territorial integrity of our country has never been a subject for discussion, and never will be. The main aim of the talks is the restoration of the territorial integrity and sovereignty of Azerbaijan.”

Azerbaijan remains committed to a peaceful resolution of the dispute, Abdullayev added.

Novruz Mammadov, deputy head of Aliyev’s administration, said the reason why little was being said about the meeting was that “there have been two years in which the heads of state have not met, and the talks process has stagnated”.

“Of course, this stagnation is connected with Armenia’s stance,” he told IWPR. “But as time has passed, the Armenian government has realised that this position will bring them no benefit, and hence another meeting between the presidents has taken place.”

Mammadov said the fact that the meeting took place was a positive thing in itself, and Armenia’s response afterwards was an improvement on previous occasions.

“Armenia always behaves well at such meetings, so as to show its best side to the OSCE [Minsk Group] co-chairs. After the meeting, it always starts making provocative, even accusatory statements,” he said. “So far, however, we have not seen any of these customary Armenian statements. All the same, it is hard for us to fully believe the Armenians.”

Armenian president Sargsyan expressed cautious optimism about the meeting, which he saw as a new stage in the talks process.

“The co-chairs will visit the region in December and hopefully the agreement I made with the president of Azerbaijan about a meeting soon will become a reality as a result,” he said.

Analysts in both countries agreed that it would require some kind of pressure from outside to force the presidents to make the kind of concessions needed to get peace talks moving.

Zardusht Alizade, a political analyst and head of the Baku School of Journalism, said that Aliyev was happy to keep the conflict in its present “frozen” state.

“The perpetuation of the conflict gives him something to trade with politically, and a guarantee of partnership from Russia., Baku will therefore reject any initiatives for peace,” he told IWPR. “The current situation benefits only Armenia. It believes that in holding Karabakh, it has already succeeded in its main aim. All that remains is to legalise its occupation. Armenia is thus waiting patiently for Azerbaijan to give up its position.”

The Karabakh Armenians’ claim to statehood has not been recognised by any member of the United Nations, including Armenia. Their administration has consistently pressed to be included in the talks process. Azerbaijan has refused to countenance this, saying it will only deal with Yerevan.

Karabakh’s foreign ministry welcomed the Sargsyan-Aliyev meeting but reiterated that it too needed a place at the table.

“The resumption of meetings at the highest level between Armenia and Azerbaijan is of great importance for activating the process of peaceful conflict settlement and for maintaining peace and stability in the region,” a statement from the foreign ministry said. “It must be pointed out that real progress in this process can only by achieve by accepting the existing realities, and by [holding] meetings in which Karabakh participates, directly and unmediated.”

Sevda Samadova is a freelance reporter in Azerbaijan. Yekaterina Poghosyan is a journalist with Mediamax in Armenia.