Member states failed to appoint an Armenian as the bloc’s new general secretary.

Member states failed to appoint an Armenian as the bloc’s new general secretary. 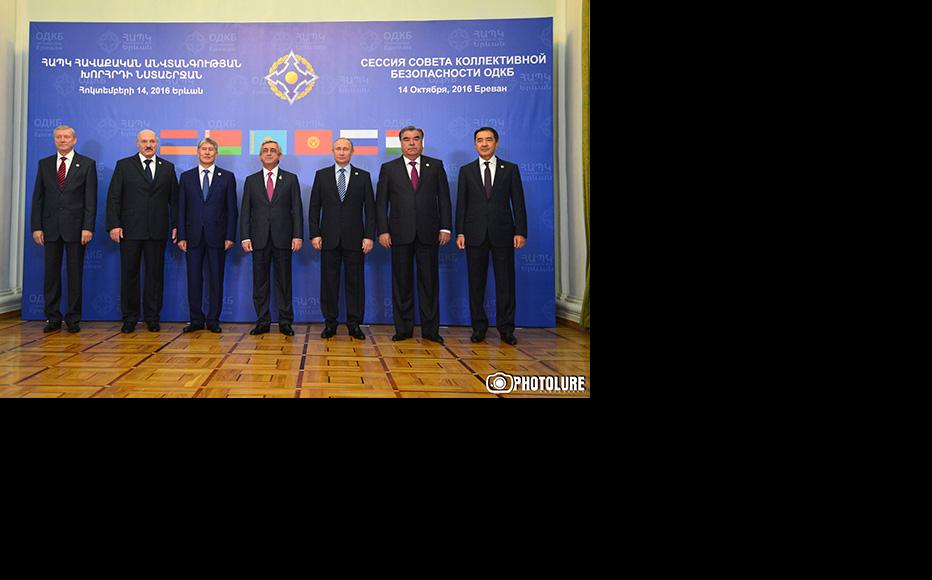 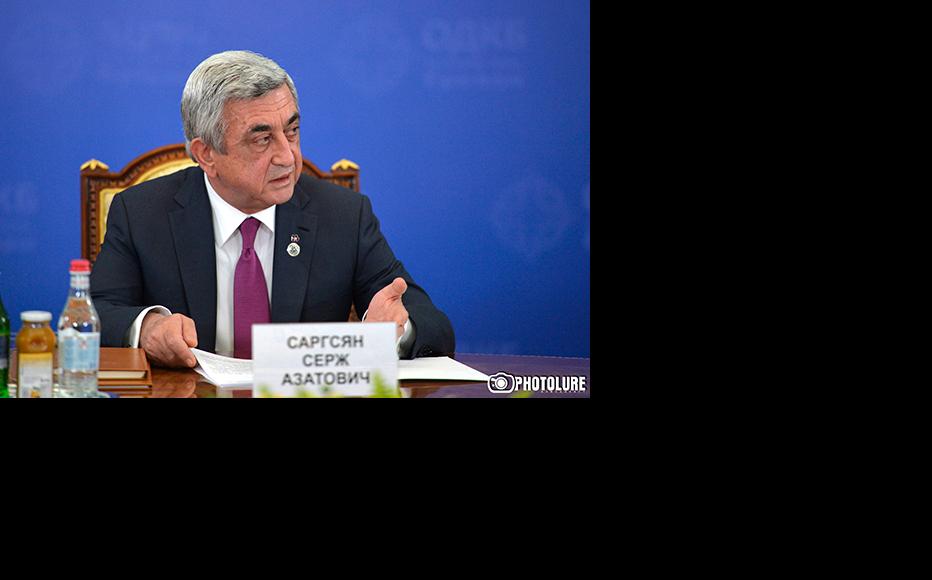 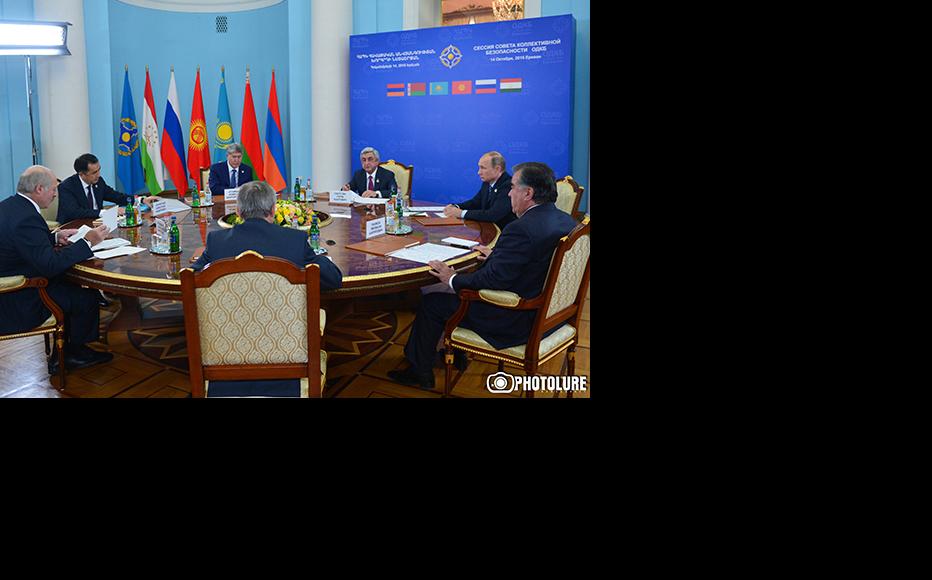 The leaders of the member countries of CSTO met in Yerevan, Armenia, October 14, 2016. (Photo: Photolure)
The link has been copied

Armenia has been left frustrated by the outcome of the most recent summit of the Russian-led Collective Security Treaty Organisation (CSTO), with analysts warning that the country’s position has been seriously weakened.

The grouping of Russia, Belarus, Armenia, Kazakhstan, Kyrgyzstan and Tajikistan adopted a collective nine-year security strategy when it met in the Armenian capital Yerevan on October 14.

It also decided to set up a joint crisis response centre for the exchange of information on common threats, including terrorism.  Details on both have yet to be forthcoming.

However, Armenian expectations that they would be handed the post of CSTO general secretary – as mandated by the rotation mechanism enshrined in the organisation´s charter – were disappointed.

Yerevan’s hopes that member states would also agree a firm joint position on the Nagorny Karabakh dispute following the uptick in violence there last April were also thwarted.

The question of the rotation was removed from the summit’s agenda with no reason given and will now be discussed when the leaders of the member countries meet in St Petersburg in December, Armenian president said Serzh Sargsyan after the summit.

This postponement caused concern among Armenian experts, especially in the wake of the most serious fighting in Karabakh since the 1994 ceasefire.

“The rotation of the CSTO general secretary was a test of the competence of the organisation that it did not pass,” said Styopa Safaryan, founder and head of research at the Armenian Institute of International and Security Affairs (AIISA).

“This organisation cannot guarantee the security of Armenia,” he continued. “The aggravation of the situation in April in the zone of the Karabakh conflict and the numerous armed incidents on the Armenian-Azerbaijani border have clearly demonstrated this.  For these reasons, Armenia has nothing to [benefit from] this organisation.”

Criticism of the CSTO in Armenia rose after the outbreak of hostilities with Azerbaijan in early April.  In particular, it was directed against close ally Russia, Azerbaijan’s main weapons supplier.

“There was no due reaction from the CSTO when Armenia was on the brink of full-scale involvement in a war with Azerbaijan… What kind of collective security can we talk about, which the CSTO should allegedly provide?” continued Safaryan, adding that Armenia should review its relations with the CSTO.

A further disappointment was the CSTO’s non-committal statement regarding the Nagorny Karabakh conflict.

Member states spoke only in general terms about the importance of resolving the Karabakh issue by peaceful means, referring to the agreement reached between the heads of Armenia and Azerbaijan in Vienna and St Petersburg after April’s hostilities.

Analysts argued that appointing an Armenian to the post of secretary general would have given Yerevan greater weight regarding the Karabakh issue.

“First of all, it would strengthen the military component of the CSTO, the importance of which for Armenia, with its problem of the Nagorny Karabakh conflict, is difficult to overestimate,” Sergey Minasyan, deputy director of the Caucasus Institute in Yerevan, told IWPR.

“In addition, Armenia, in all likelihood, [would have] tried to push through issues related to regional security, in particular to the Nagorny Karabakh conflict.  I think that Yerevan would have also tried to put the question of rejecting the sale of weapons to Azerbaijan by the member countries, in particular Russia,” he said.

Military-technical cooperation between Armenia and Russia is at a high level, with more than 50 bilateral contracts and agreements.

Yerevan and Moscow have also joined their air defence systems in the region and formed a joint command, which includes the Russian military base in Armenia and certain contingents of the Armenian army.

Around 5,000 military personnel are stationed at the 102nd Russian Military Base in Gyumri, Armenia´s second largest city.

Former minister of defence Vagharshak Arutyunyan argued that Russia was in fact the main guarantor to prevent the outbreak of an all-out conflict between Armenia and Azerbaijan.

“Azerbaijan cannot start a full-scale war, since all issues boil down to military cooperation with Russia, and should not allow for war to break out in the region,” he told IWPR. “According to its military doctrine, Russia can use nuclear weapons in the case of aggression against itself or its allies.  So, we are under the ´nuclear umbrella´, which Azerbaijan and Georgia do not have.”

This Russian presence “also ensures the security of Armenia together with Armenian armed forces,” Arutyunyan continued.

The situation is complex, however, as Armenia´s defence policy is not only oriented towards Russia but also involves cooperation with NATO. Unlike neighbouring Georgia, Armenia does not intend to join NATO; as a member of the CSTO, this would be out of the question.

Russian experts had their own explanation for the rotation mechanism remaining in limbo.

“Apparently, Armenia has not carried out due work on coordinating its candidate with the rest of the CSTO member states, which led to such a result,“ said Alexander Krylov, president of the Scientific Society of Caucasiologists.

Although the name of the Armenian candidate for the post of general secretary has not been officially confirmed, three former and current military figures have been mentioned in the local media.

They were the national security council secretary and former chief of the general staff of the armed forces Yuri Khachaturov as well as former defence ministers Harutyunyan and Seyran Ohanyan.

Ohanyan has publically denied these reports, saying that even if he received such a proposal, he would reject it.  The other two have neither confirmed nor denied these rumours.

Meanwhile, a government reshuffle has caused controversy after Vigen Sargsyan, former chief of the presidential administration, was named Armenia’s minister of defence.

Sargsyan, who is not related to the president, has significant experience in the field of diplomacy and governance.  He has a master´s degree in law and diplomacy from the Fletcher School of Diplomacy of Tufts University and is also a graduate of the Russian St. Petersburg State University with a specialty in personnel management.

However, he is a civilian, which caused some disquiet in the ranks of the military.

The president told senior army officers that, according to the constitution, the military´s number one should be the chief of general staff, not the minister of defence.

“The minister should deal very little with the everyday routine activities of the troops,” he said.

Minasyan interpreted Vigen Sargsyan’s appointment as a move to put the defence department under the direct control of the president rather than as a sign of a change in policy.

“It’s not the preference of one person but the general security entourage and the setup of interests determines the defence policy of the country,” he told IWPR. “In this regard, the Armenian-Russian military-technical cooperation was, is and will be a priority for both countries.  Here one should not expect any significant changes.”