Exotic beasts are often displayed in restaurants or kept by wealthy elites as a status symbol.

Exotic beasts are often displayed in restaurants or kept by wealthy elites as a status symbol. 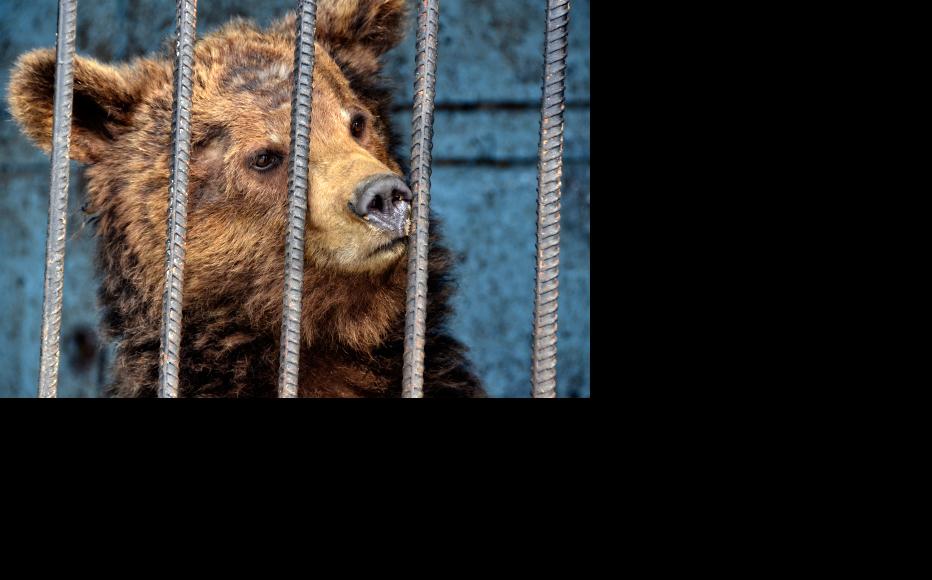 The bears found the conditions they were kept in distressing. (Photo: Raffi Berberian) 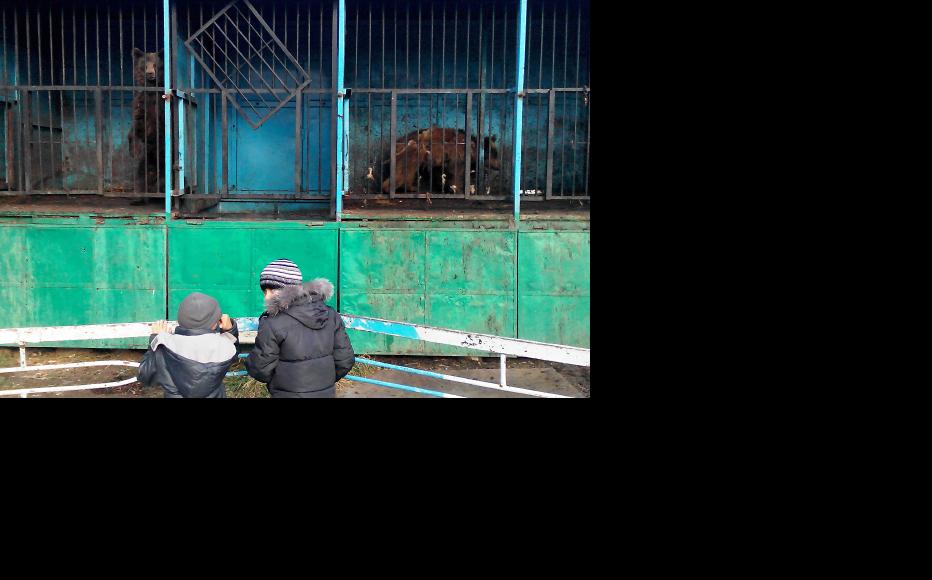 The bears at the zoo were confined to small, cramped cages. (Photo: Gagik Mkhitaryan) 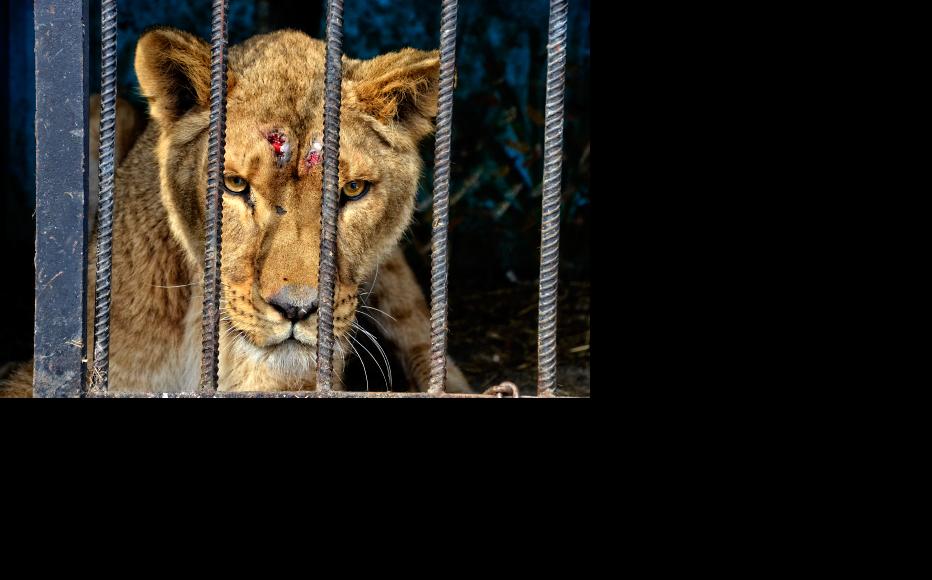 One of the lions damaged her head by hitting it repeatedly on the bars of her cage. (Photo: Raffi Berberian)
The link has been copied

The plight of starving bears and lions trapped in a derelict zoo has sparked a wider debate in Armenia about animal rights.

Vardanyan told IWPR that he had imported the animals from Russia with the aim of setting up a new educational attraction in the city’s central park. But after he was declared bankrupt and developed health problems, he was no longer able to care for the animals properly, he said.

Some of the creatures were relocated to other privately-owned facilities, but Vardanyan could not find a home for the remaining three lions and two bears.

Maddened by hunger, the animals started to show signs of abnormal behaviour.  One of the lions kept hitting its head against the bars of the cage and suffered deep wounds to its forehead.

Vardanyan issued a public plea for help rehousing the wild beasts, and local media and animal rights NGOs repeatedly publicised their plight. One initiative, SOS Gyumri Zoo Animals, was set up by well-wishers specifically to help, and donated food supplies for the animals for several months.

However, it was an article in the British newspaper The Daily Mail in January that finally drew international attention and resulted in a wave of offers of assistance.

The bears were quickly offered a place in the Libearty Sanctuary in Romania, Europe´s largest bear reservation.  On January 22, they were transported to the Yerevan Zoo for a quarantine period before being moved to their new home.

The lions were rescued on February 10 in a joint effort by Armenia’s Foundation for the Preservation of Wildlife and Cultural Assets (FPWC) and the Worldwide Veterinary Service (WVS). The three animals were transferred to the Caucasus Wildlife Refuge, a privately-protected area managed by the FPWC.

Activists say that the story has highlighted a wider issue of animal rights in a country where keeping an exotic menagerie is a popular hobby for affluent businesspeople.  Restaurants and hotels also often display unusual animals, particularly monkeys and bears, to draw in more customers.

Some of those who maintain private menageries say that they are actually helping to preserve species.

Artyom Vardanyan is director and founder of the Jambo Exotic Park & Restaurant near the village of Dzoraghbyur, 15 km from Yerevan. He argued that responsible businessmen like himself, who keep exotic animals for entertainment but cared for them properly, were aiding conservation efforts.

“However, simply taking an animal and keeping it in captivity for the sake of one´s own ambitions, and to get rid of it once you no longer want it, is, of course, unacceptable and must be punished,” Vardanyan told IWPR.  “If they are kept in good condition, they will multiply and in this way we will contribute to the protection of animals.”

Others point out that these animals, either captured from the wild or bred in captivity, are often kept in small cages without adequate food.  Animal rights activists estimate there are over 60 bears in captivity in private hands in Armenia.

There is also an issue of public safety, as the animals are not always kept safely locked away.

In 2013, residents reported a bear cub wandering along Artsakh Street in the capital. The following summer, another bear was spotted walking on Yerevan’s Halabyan Street having escaped from a nearby swimming pool where it was kept.

In October 2014, a bear kept in a restaurant in the resort town of Tsaghkadzor, 80 kilometres from Yerevan, escaped from its cage and ran out of the premises.  The emergency ministry sent a rescue squad to the scene and, together with Yerevan zoo staff, the bear was caught, tranquilised and taken to a secure location.

Fortunately, no one was injured in these incidents.  Although they piqued public curiosity, interest in solving the problem of private ownership of wild animals petered out. Activists now say they will use the example of the ill-fated Gyumri zoo to ensure the government introduces new legislation.

“We have to fight this time and achieve results.  This is a turning point, and I think there will be progress,” said Nare Aramyan, a representative of the British animal welfare charity Pro Paws in Armenia.

A few years ago, Pro Paws presented a package of draft laws on animal welfare to Armenia´s parliament, but had not received any response, she said.

“There are very few wildlife experts in Armenia and no rehabilitation centres [where sick, injured and orphaned animals are treated].  It is necessary to make an inventory of the wild animals kept in captivity, since there is no data about them at all,” Aramyan said.

Armenia has a limited amount of legislation on animal welfare. There is a law on fauna dating from 2000 that defines state policy on the protection, maintenance, breeding and use of wild species. But animal activists say is ineffective.

Tehmina Arzumanyan, press secretary of Armenia´s ministry of nature protection, told IWPR that a special working group was currently working to revise this particular law. She also said she hoped that more complex mechanisms would be put in place in the near future.

Experts in the field argue that this does not go far enough. Ruben Khachatryan, director of the Yerevan Zoo and founder of the FPWC, is a member of the ministry of nature protection’s working group.  He told IWPR that the issue of individuals and private organisations keeping wild animals should be subject to mandatory legal regulations. The entire process of control should be implemented at the state level, he added.

“I think the keeping of carnivorous animals should only be allowed under licence, which should be issued to individuals or organisations for a reasonable, not too long period, for example, for three years,” Khachatryan continued. “At the same time, it is necessary to carry out continuous and regular monitoring to check whether the person keeping the animal is complying with the terms set forth by the licence.”

Bernard Harrison, a former CEO of the Singapore Zoo and founder of a zoo consultancy, also told IWPR that individuals and private institutions keeping wild animals should be subject to clear-cut regulation.

“It should be understood that these rules need to include not only mandatory conditions for the care and maintenance of animals, but also clarify what will happen to the animal once its keeper does not or [cannot] take care of it,” Harrison said.

However, Gevorg Petrosyan, the coordinator of the Gyumri Aarhus Centre, a local environmental initiative, said that there remained a wider issue of class and privilege. This would make it harder to legislate on the issue, he added.

Petrosyan told IWPR that animal protection was “linked to the preferences of the political elite.

“It is difficult to find a substantial solution to this issue that does not run counter to their interests,” he continued, “because today a number of oligarchs keep wild animals.”

Gohar Abrahamyan is a journalist for the online publication Armenianow.com

Armenia
Tradition
Connect with us