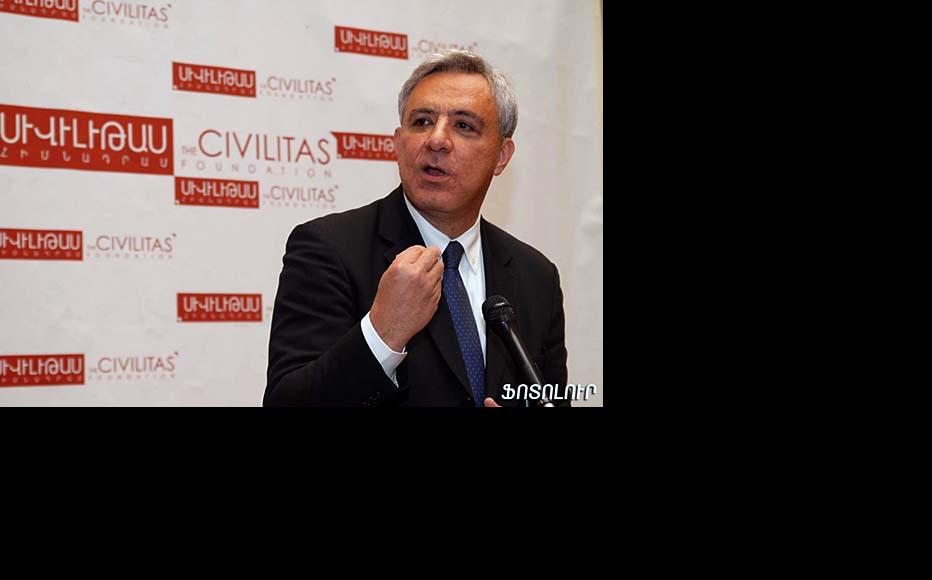 Vartan Oskanian. (Photo: Photolur)
The link has been copied

A major opposition party in Armenia has accused the authorities of seeking to prosecute one of its leaders so as to discredit him ahead of next year’s presidential election.

Vartan Oskanian, a former foreign minister and a leading figure in the Prosperous Armenia party, was stripped of his parliamentary immunity on October 2, opening the way for charges of embezzlement to be brought against him.

Opposition members boycotted the vote, hoping to prevent the chamber achieving a quorum. The ruling Republican Party and the allied Country of Law party pressed ahead, however, and the resolution was passed 64 to six.

In a criminal case launched in May, prosecutors accuse Oskanian of misappropriating 500,000 US dollars which the Civilitas Foundation, a charity he set up, received as a gift.

Oskanyan denies the allegations outright, and insists that the case is entirely politically motivated, since it was launched just three weeks after the May 6 parliamentary election, in which Prosperous Armenia came second.

After the election, the party left the ruling coalition it was in with the Republicans and moved into opposition.

“I think this investigation is political for two reasons,” Oskanian said. “First, it has no legal basis. We are talking about a private foundation which received a sum of money from an individual. There has been no complaint either from the donor or from the foundation, because the money hasn’t gone anywhere,” he said. “Secondly, the chronology is important.… We are preparing for a presidential election [February 2013], and I’m a member of a party which… could present a major challenge to the ruling party.”

Jon M. Huntsman, an American industrialist whose philanthropic fund gave Civilitas the money, has not commented on the case. Oskanian’s lawyer Tigran Atanesyan has said that he will do so, and that “a statement from Huntsman will come like a thunderbolt out of a clear sky”.

The Civilitas Foundation has campaigned in Oskanian’s defence, but Armenia’s chief prosecutor Aghvan Hovsepyan says he is acting in the organisation’s best interests.

Many analysts suspect that the case may well have something to do with Prosperous Armenia leaving the ruling coalition.

“Oskanian, who is the second most important figure in the party, could be the main challenger to the Republican Party in the presidential election,” Alexander Iskandaryan, a political analyst and director of the Caucasus Institute, said. “The courts have been mobilised against him in order to weaken Prosperous Armenia’s political standing. It’s obvious the government believes it can break Prosperous Armenia.”

President Serzh Sargsyan heads the Republican Party and is almost certain to stand for a second term in February.

Oskanian is seen as one of the few public figures who could present a serious challenge. He has said he would be prepared to stand if his party’s leader, Gagik Tsarukyan, decides not to do so.

Former president Robert Kocharyan, under whom Oskanian served as a minister and who is often linked to Prosperous Armenia, has spoken out in his defence.

“This is an outrageous case of parliament bringing discredit on itself, and it will have consequences for the country’s image. It is not what Armenia needs,” he said.

John Heffern, the United States ambassador in Yerevan, has expressed concern about the case.

“This development, in my view, is bad for justice and democracy in Armenia. As I have said previously, the case appears to represent the selective application of Armenian law,” he said in a videoblog. “Moreover, the timing of these events in relation to the election schedule is troubling.”

Even Armenia’s official ombudsman, Karen Andreasyan, has raised the alarm.

“To be honest, I do not believe that we are talking solely about a legal process. The removal of parliamentary immunity by the National Assembly is part of a legal process, but it will always have a political component,” Andreasyan said in an interview with civilnet.am.

Eduard Sharmazanov, deputy speaker of parliament and spokesman for the Republican Party, rejected any suggestion that the decision to strip Oskanian of his parliamentary immunity was anything other than a legal formality.

“In Armenia, there are no political investigations, and the country is instead moving towards the development of democracy,” he said.

Political experts said that paradoxically, the case was serving to boost Oskanian’s popularity.

According to Richard Giragosian, director of the Regional Studies Centre, an independent think tank, “Whether it wants to or not, the Armenian government is turning Oskanian into a political martyr.”