Government too closely tied to Moscow to say anything controversial, although it plans to work with new Kiev leaders.

Government too closely tied to Moscow to say anything controversial, although it plans to work with new Kiev leaders. 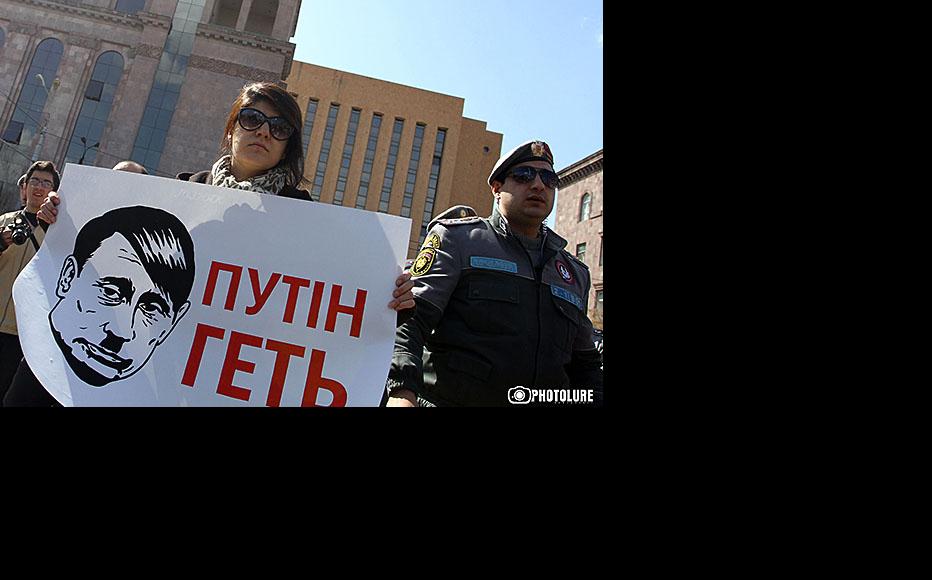 A protest holds a banner saying “Putin Get Out” during a demonstration outside the Russian embassy in Yerevan, March 5. (Photo: Photolure agency) 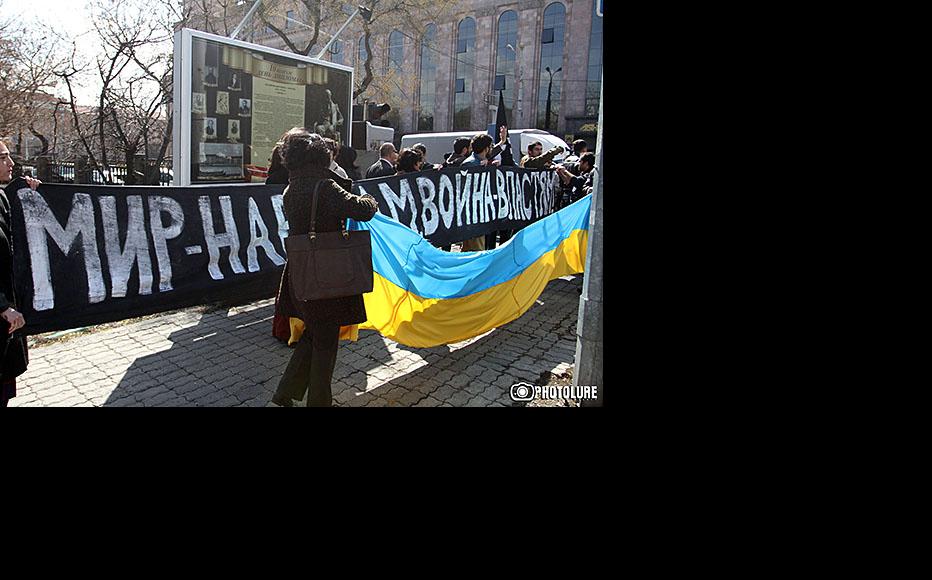 A banner reads “Peace to nations – war on the authorities” at a protest against the Crimea intervention, held outside the Russian embassy in Yerevan on March 5. (Photo: Photolure agency)
The link has been copied

Armenian officials are treading a careful line over the Ukraine crisis, keen to avoid angering their allies in the Kremlin but also anxious to avoid supporting an intervention in a sovereign state.

“This is our position – to continue cooperating with Ukraine, and to always act in line with Armenia’s interests,” Kocharyan told reporters.

While this position is out of step with Russian policy, which refuses to recognise the removal of Yanukovich, Armenian officials refused to join the Ukrainians in condemning what the Kiev leadership says is an invasion of Crimea.

“Our ambassador is in Kiev and is carefully following the course of events,” said foreign ministry spokesman Tigran Balayan.

Officials in Yerevan are therefore trying not to antagonise either side.

“The situation is, shall we say, delicate. The government in Armenia is trying to keep quiet until the outcome of the Ukrainian crisis becomes clear,” Sergei Minasyan, deputy director of the Caucasus Institute in Yerevan, told IWPR.

Ruben Mehrabyan, of the Centre for Political and International Studies, added that “even if the Armenian government recognises the dangers posed by Russia, they still can’t criticise the Kremlin since they are under its control,”

Armenia has faced dilemmas about foreign policy direction similar to those that form the backdrop to Ukraine’s current crisis. In early September, President Serzh Sargsyan announced that Armenia was to join the Russia-Kazakstan-Belarus Customs Union, ditching plans to sign an Association Agreement with the European Union.

Armenia is already part of the Moscow-led Collective Security Treaty Organisation, hosts a large Russian military presence, does a quarter of its foreign trade with that country.

Although ties have always been close, many Armenians still suspect that President Sargsyan was pushed into applying for Customs Union membership – and that the same pressure is making other leading figures stay silent on Crimea.

“It is important to us for the crisis in Ukraine to be resolved peacefully. At the same time, however, it is no less important that a solution is reached in line with the norms of international law,” he said.

Most opposition parties have taken a similarly cautious line, the only exception being the Heritage party, which strongly condemned Moscow’s actions.

“Russian actions in Crimea and in other parts of Ukraine constitute aggression and a gross violation of international law. Their aim is to force Kiev into Moscow’s orbit,” Styopa Safaryan, the party’s general secretary, told IWPR.

Daniel Ionisyan, 27, who spent several hours behind bars last year after protesting against a visit to Yerevan by President Vladimir Putin, said the outcome of the Ukraine crisis would seal the fate of Armenians, too.

A Committee for Solidarity With the Maidan – the Kiev square where protesters massed to oppose Yanukovich – has been set up in Yerevan. It too damned Putin’s government as the aggressor, and likened the official silence in Armenia to appeasement.

“These actions resemble those shameful episodes in European history – the German Anschluss of Austria in 1938, and the annexation of Czechoslovakia by Adolf Hitler,” a statement from the committee said.

The Maidan solidarity committee includes prominent rights activists like Artur Sakunts, head of the Vanadzor office of the Helsinki Civilian Assembly, Boris Navasardyan, head of the Yerevan Press Club, and Davit Shahnazaryan, former director of the National Security Service, as well as many ordinary people.

The Armenian business sector has been as reluctant as the politicians to express forthright opinions on events in Ukraine.

Gagik Makaryan, head of the Republican Union of Employers, said he was concerned about the potential impact of the crisis on the Russian economy, which is already weakening despite consistently high oil prices.

“The possibility that the international community will impose sanctions against Russia is also a matter of concern to us. Such a course of events would strike a blow against Armenian businessmen,” Makaryan told IWPR. “The instability of the Ukrainian economy is also having a negative impact on us.”

Vahe Harutiunyan is a freelance journalist in Armenia.

Ukraine
Conflict
Connect with us