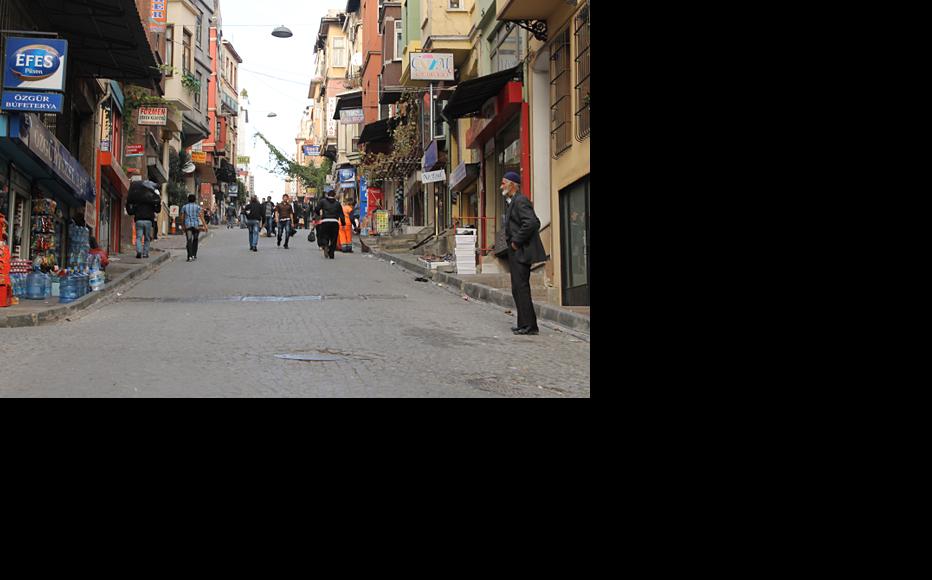 Istanbul's Gedik Pasa district, where a lot of migrants work. (Photo: Gayane Mirzoyan)
The link has been copied

In recent comments about Armenians, Turkish president Recep Tayyip Erdoğan appeared to portray them as a hostile, alien presence, reviving uneasy memories of the past.

As his Justice and Development Party (AKP) party went into this month’s parliamentary ballot, Erdoğan listed various forces that he viewed as “sponsors” of the People’s Democratic Party (HDP). As well as some of Turkey’s Alevi faith group and the Doğan media group, he named “homosexuals” and “the Armenian lobby”.

In the event, the HDP, which has strong support among Kurds, won an impressive 80 of the 550 seats in the legislature, and AKP lost its parliamentary majority, although it remains the largest party represented.

Turkey is home to an ancient Armenian community and in recent years has also played host to significant numbers of migrant workers from the Republic of Armenia.

In April, the 100th-anniversary Armenian Genocide Remembrance Day was marked in Yerevan.

Ahead of the event, Erdoğan made remarks that were perceived in Armenia as a veiled threat. Referring to Armenian nationals working in Turkey, he said on April 18, “We could deport them. We haven’t done that. We are still playing host to them in our country.”

Turkish-Armenian relations are clouded by the mass killings of Armenians by the Ottoman authorities in 1915. Armenians describe this as genocide, and have lobbied world governments to do the same. Over 20 countries including France, Russia, Sweden and Germany have officially acknowledged the killings as genocide, but Turkey continues to reject the term. Second, there is the Nagorny Karabakh dispute, in which Turkey sides with Azerbaijan against Armenian ambitions for independence.

Last year, it seemed that Turkey and Armenia were inching towards the kind of rapprochement that took place 2009. In April 2014, for example, Erdoğan expressed sympathy with Armenians over the 1915 killings and spoke of “our shared pain”, although he did not apologise or ask for forgiveness, still less say the word “genocide”.

By autumn, signs of goodwill had faded. In February 2015, Armenian president Serzh Sargsyan announced that he had formally recalled from parliament the accords signed with Turkey in 2009. He cited an “absence of political will” on Ankara’s part.

Andranik Ispiryan, a Turkey expert based in Yerevan, believes the Armenian immigrant population is “hostage to Erdoğan’s policies”.

He noted that Erdoğan had made similar threats against immigrant Armenians before.

Erdoğan,then prime minister,told the BBC Turkish service in 2010 that of 170,000 Armenians living in Turkey, only 70,000 were citizens. The rest, he said, “we are tolerating”.

"If necessary, I may have to tell these 100,000 to go back to their country, because they aren’t my citizens. I don't have to keep them in my country,” he said.

Ispiriryan recalled. “That raised the alarm. I spoke to Armenians living and working in Istanbul, and I can tell you they were all afraid they’d be deported”.

Lülüfer Körükmez, a sociology lecturer at Ege University in the Turkish city of Izmir, says all immigrants feel vulnerable, but Armenians more than most given the historical context.

“Therefore, by referring to migrants in an atmosphere of political tension, he [Erdogan] makes them more vulnerable and leaves them in a more uncertain, dubious position,” she said. “More than that – migrants’ lives become politicised.”

Another Turkey-watcher in Yerevan, Alin Ozinyan of the Civilitas NGO, argues that the migrant population will not be too worried by Erdoğan’s latest comments.

“I wouldn’t say there is fear, since they understand that if you’re planning to do something, you’ll actually do it rather than talking about it. This is just politics,” she said.

Asmik Petrosyan, 53, has been in Istanbul for eight years now, living with a Turkish family and caring for their elderly grandmother.

“They like us here,” she said. “It isn’t that they intimidate us, but every time April 24 [Armenian Genocide Remembrance Day] comes round, my employer warns me it would be best not to go out since you never know what might happen.”

Ispiryan says there is a lot of work for illegal migrants in Istanbul, with wages between 500 and 1,200 US dollars a month. Armenian women, in particular, work as waitresses, nannies, or leather industry workers, whicle those who speak English in Russian can get sales jobs in shops.

Narina Vardanyan, 48, looks after an elderly couple in the same city and uses her days off to do housework for others.

“The Armenians are cheap labour compared with the Turks,” she told IWPR.

Estimates of the number of Armenian citizens living legally or illegally in Turkey vary, but the consensus is far fewer than the 100,000 Erdogan cited in 2010. In his April 18, 2015 speech, he gave a total of 100,000, “both [Turkish] citizens and non-citizens”.

A 2011 study by the Eurasia Partnership Foundation in Yerevan indicated that there were about 15,000 Armenian migrants in Turkey. Ispiryan puts the current figure at just 5,000.