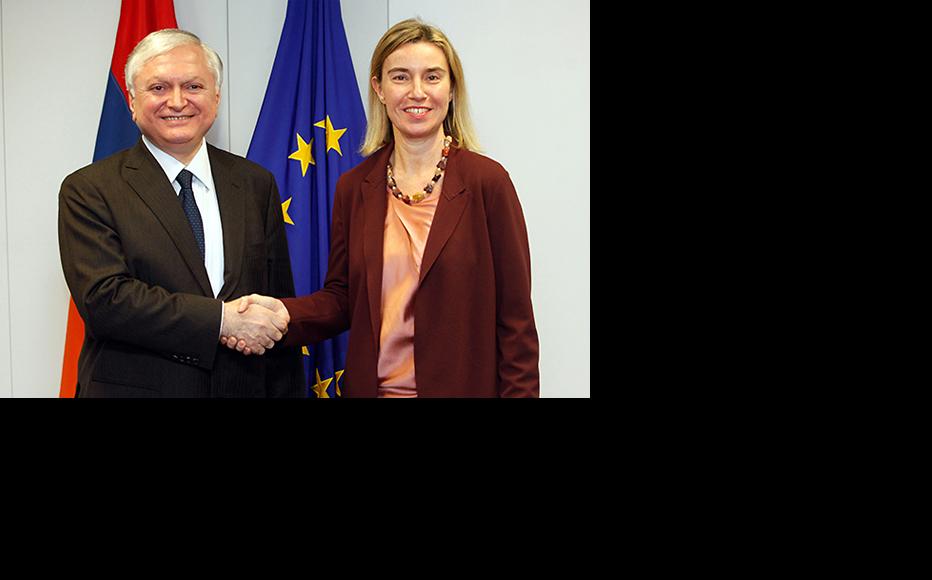 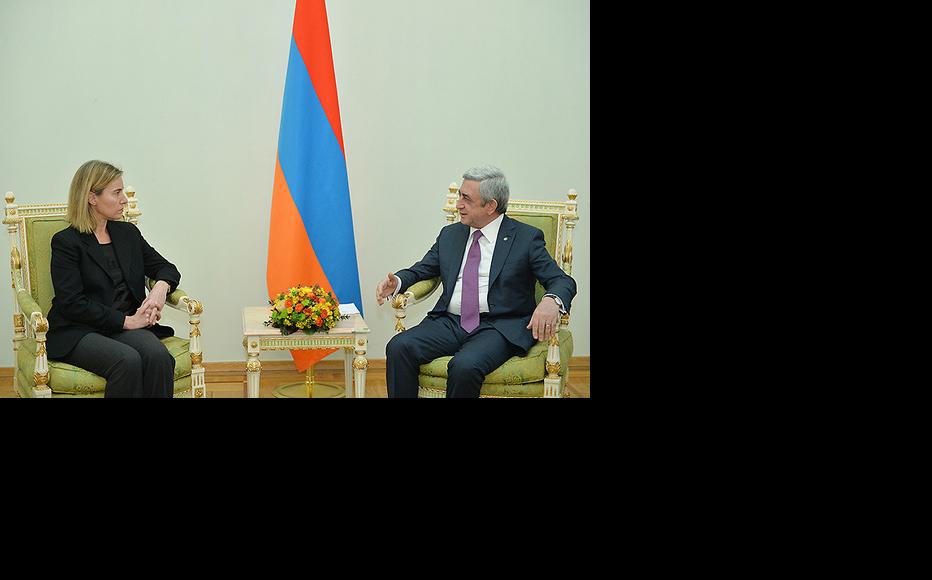 Discussion between Serzh Sargsyan and Federica Mogherini. (Photo courtesy of RA President's official website)
The link has been copied

Experts in Armenia say that the pace of integration with the European Union may depend on how well Yerevan manages upcoming constitutional reforms.

The two parties had previously agreed but not signed an association agreement, which was cancelled in 2013 after Armenia decided to join the Moscow-led Eurasian Economic Union (EEU).

However, this grouping brought only limited economic benefits for Yerevan. Last year, Armenia´s leadership showed renewed interest in engaging with the EU.

Negotiations on a new framework for deepening bilateral political and economic cooperation were re-launched last December.

“The decision of the Armenian authorities to join the Eurasian Economic Union led to uncertainty in Armenia´s policy towards the EU for some time.  Today we know that other commitments do not prevent Armenia from maintaining close relations with the EU,” said Piotr Switalski, head of the EU delegation to Armenia, at a press conference organised by IWPR´s Yerevan office on February 7.

The first round of new talks between the delegations of Armenia and the EU were held on February 15, focusing on trade and investments.

While talks move ahead, experts say the agreement’s success will ultimately depend on the extent and depth of Armenia´s domestic political reforms.  The EU is expected to keep a watchful eye on these developments.

Armenia held a constitutional referendum on December 6, which will lead to a change of governance after the 2018 presidential elections.  The current semi-presidential system will be replaced by a parliamentary form of government, giving the National Assembly greater powers. The next president will have a more ceremonial role, while the powers of the prime minister will be expanded.

“This cooperation is the most important guarantee for the deepening of reforms in Armenia, the strengthening of democratic institutions and the stimulation of economic cooperation,” Armenian President Serzh Sargsyan said on an official March 16 visit to Cyprus.

However, although the constitutional changes are officially intended to decentralise power and strengthen democracy, many doubt that the political elite will so easily agree to abandon their accumulated power. There is a growing perception that the real purpose is to give Sargsyan the chance to stay in power.

Both parties to the negotiations have stressed that Armenia’s EEU membership should be no barrier to closer EU integration.

The EU and Armenia “want to be good partners to each other, and this should under no circumstances be seen as exclusive or divisive, competitive or contradictory to other traditionally close relations,” she told reporters.

“The new agreement will not include provisions relating to customs regulations, as Armenia is part of the Eurasian Economic Union, which has a single customs policy,” Melkonyan told IWPR.

Moscow has not yet stated its position on the new Armenia-EU negotiations.  The topic was reportedly not discussed during a meeting between Russia´s president Vladimir Putin and his Armenian counterpart Sargsyan in Moscow on March 10.

But in addition to economic cooperation, the EU wants to emphasise democracy, the rule of law and the fight against corruption. Other factors are human rights, fundamental freedoms, constitutional and judicial reform as well as justice and accountability.

This has thrown Armenia’s constitutional changes into the spotlight.

“Particular attention is also needed as regards the reform of the electoral system,” Mogherini said.  “This should be carried out in due time and in an inclusive manner, so that all stakeholders would be able to build broad consensus on it.”

The Armenian authorities have said they are committed to reforms and the democratisation of the country.  But some experts believe that Yerevan may not live up to its promises and predict that the entire process could be slowed down or even derailed.

Richard Giragosian, director of the Regional Studies Centre in Yerevan, said that Armenia needed to pass three tests to be accepted by the international community.

The first was last December’s constitutional referendum, which was marred by allegations of fraud.

“Unfortunately, the authorities failed the first test,” he continued. “The next test is the development of a new electoral code.  The final [test] will be the parliamentary elections expected in May 2017.  They are crucial for the future of Armenia.  The results of these elections are much more important than the results of previous elections,” Giragosian concluded.

“Armenia is facing a fork in the road,” he said. “Constitutional changes can either lead to a real change or to stagnation.  In this regard, the 2017 elections will be an important milestone, which will be held under new conditions and, one might say, become a precedent.”

Switalski noted the February report from the Organisation for Security and Co-operation in Europe (OSCE) which had been critical of the referendum process.

His words were not well received by Grair Tovmasyan, chief of the office of the national assembly and co-author of the new constitution.

“Armenia is not the kind of country that is given homework and then an exam,” he said.  “In the first place, the reforms are needed by us.  Some of the OSCE/ODIHR criticisms have already been included in the reform process of the electoral legislation.”

Quite apart from domestic political concerns, Arthur Ghazinyan, director of the Centre for European Studies, noted that this opportunity for Armenia and the EU could easily be once again derailed by wider strategic issues.

“Armenia and the EU held negotiations for three-and-a-half years, developed a document,” he said. “However, the geopolitical situation changed and Armenia made the corresponding decision to join the EEU.

Yerevan had been motivated in its decision by security concerns, he added.

But Switalsi argued that Armenia´s European integration should not be limited in this way.

“We believe that Armenia in the current geopolitical and geographic situation should strive to have as many friends as possible,” he said. “It is good to have two or three reliable partners, but it is also not bad to have more of them.”