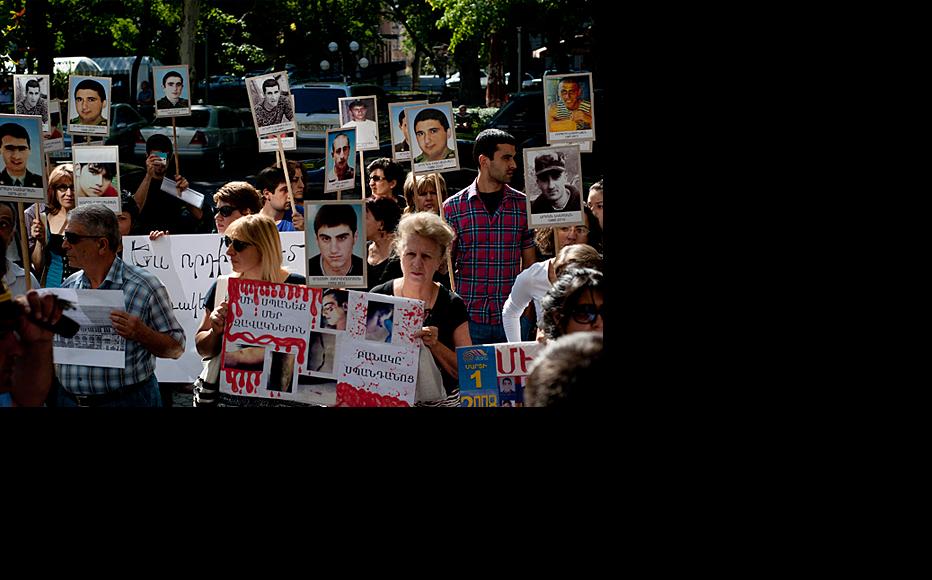 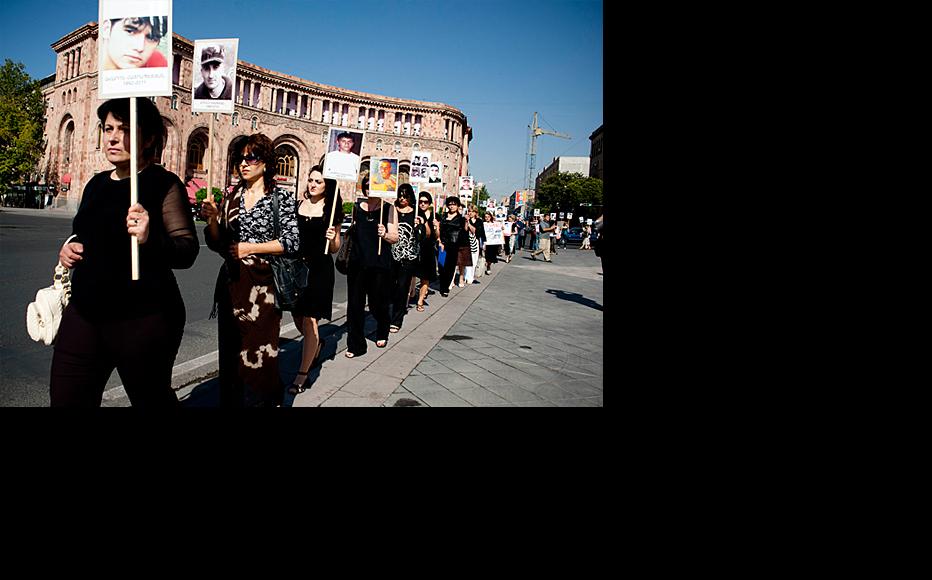 A wave of protests following the murders of three conscript soldiers in the Armenian army has forced the government to announce immediate investigations, with an unprecedented degree of transparency.

Details of the death of one of the three, 18-year-old Aghasi Abrahamyan, who died at an army base in August, were broadcast nationally on Armenian Public Television, the first time the defence ministry had been so open in its response.

Abrahamyan’s death was originally recorded as suicide, but photographs distributed by his relatives and a subsequent court investigation showed he had been badly beaten, and the cause of death was head injuries.

Several officers and a lower-ranking soldier have been arrested, but Abrahamyan’s father Gegham insists that the investigation needs to delve more deeply.

“It was clear the boy was severely beaten, and this couldn’t have been done by just one or two individuals. They just couldn’t have beaten him to a point where he died,” he said. “I’m sure more people were involved part in this, but I don’t know what to do any more. I don’t know what to fight for, since my boy won’t be coming back, whatever happens.”

A week before Abrahamyan died, 19-year-old Vardan Sevyan died in the town of Goris three months before his conscription period was due to ed. Officials are treating his death as suicide, but his parents say they not believe it was.

The third death, that of Hayk Mkrtchyan, also 19, occurred on September 7. A fellow-conscript has been arrested on suspicion of his murder.

In the past, the Armenian army has not been so willing to release details of deaths of this kind.

For a group of parents who have been pressing for investigations into their sons’ deaths for over four years, this is just the start.

“I have nothing more to lose. I’ve lost everything I had; I can’t get my son back, and the investigation of his death is a total disaster,” Robert Mirzoyan, whose son Gegham was killed in 2007, said. “But I will keep on fighting, because the people who committed these murders must be punished so that this culture of impunity ends and there are no more murders.”

Mirzoyan was one of the first to begin protesting publicly, and parents like him have been joined by human rights activists and other Armenians in recent months, all of them demanding reforms to the army to improve the conditions conscripts serve in. Pressure groups united a month ago to form a campaigning organisation called the Army in Reality.

Campaigners gather every Thursday outside the government building, often in their hundreds, to the great discomfort of defence officials.

On September 15, Defence Minister Seyran Ohanyan promised that all three murders would be fully investigated, saying that the military prosecutor and a deputy minister had already taken charge of the probes.

“There has never been a culture of impunity in the army, and there isn’t now. We must not cover up a single case that might go unpunished. Everyone will face punishment as prescribed by the law, and if they don’t merit criminal penalties, then administrative measures will be taken, including expulsion from the armed forces,” the minister told parents, insisting that the number of murders had been falling year by year.

Official statistics show that 228 soldiers have died in the army since 2007. Of that number, 32 have been killed in incidents along the ceasefire line with Azerbaijan. Many analysts say the figures understate the problem, saying that more than 1,500 murders have taken place in the armed forces since the mid-Nineties.

“Many of the deaths in the army were officially registered as suicides, when in reality they were premeditated murders, although often there was insufficient evidence to prove it,” lawyer Seda Safaryan said.

The latest killings have propelled the problem of bullying in the military to the centre of public discussion.

Part of the change was sparked by an incident in July 2010, when a conscript opened fire on his comrades, killing a lieutenant, a sergeant and three other soldiers before committing suicide. That sparked a wave of public anger that has yet to die down, aggravated by a statement by the conscript’s parents who claimed their son had a psychological condition which meant he should have been deemed unfit for service.

“Lots of people say there had never been anything of the kind before that incident, but we really don’t know, since the army was a closed subject and we didn’t get full information in those days,” said Avetik Ishkhanyan, chairman of the Armenia Helsinki Committee, a human rights group.

After the 2010 shootings, there were public demands for Ohanyan to resign as defence minister, but parents had to be satisfied with the sacking of the military prosecutor, whose replacement Gevorg Kostanyan promised to root out and punish wrongdoers. However, there no large-scale investigations took place.

Pubic anger has gathered strength since news of the three most recent deaths emerged.

Some human rights activists say the military is not really interested in investigating suspicious deaths.

“The army has set itself the goal of obtaining the quantity of soldiers it wants, rather than assuring the quality of individual soldiers, and it pays absolutely no attention to protecting their rights,” Artur Sakunts, chairman of the Vanadzor regional office of the Helsinki Civic Assembly, said.

Richard Giragosian, head of the Centre for Regional Studies and a former soldier in the United States army, the Armenian armed forces need to introduce better training and tighter discipline for officers and soldiers alike, and eradicate the culture of impunity and secrecy.

“The Armenian army must set itself the duty of respecting the soldier as an individual, and the state must secure the safety of every soldier,” he said.

Suren Ohanjanyan, whose son Tigran was killed in while serving in the army, argues that the protests are finally beginning to produce results.

“I think something must be moving. We can even say there’s already been a change. When we were protesting four years ago, we were just individuals, but now other people and organisations have joined us, and they’re helping us to be heard,” he said. “I haven’t lost hope.”

Gohar Abrahamyan is a reporter for ArmeniaNow.