Custom of early weddings which put an end to girls’ education still strong in traditionalist community.

Custom of early weddings which put an end to girls’ education still strong in traditionalist community. 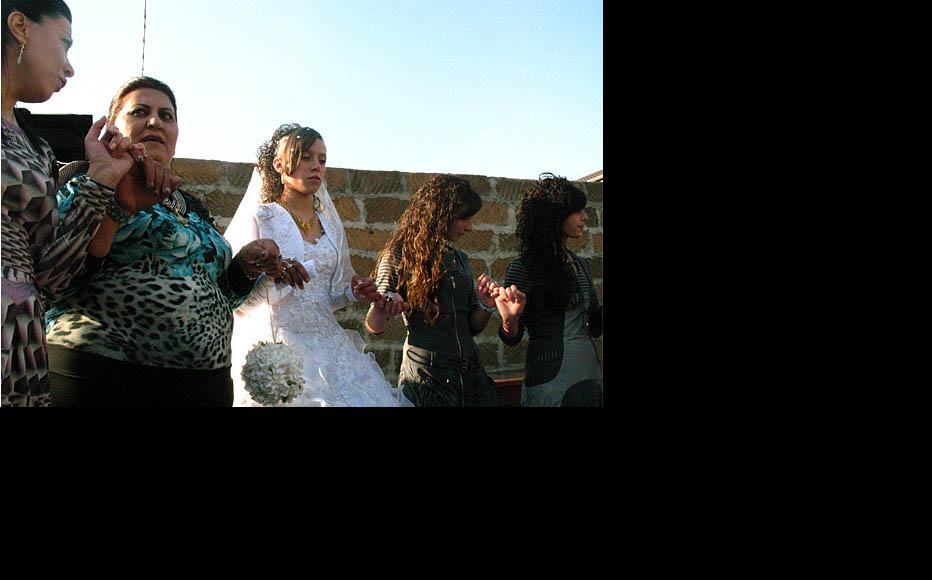 Strong traditions and a unique faith bind the Yezidis together. (Photo: Lusine Avagyan) 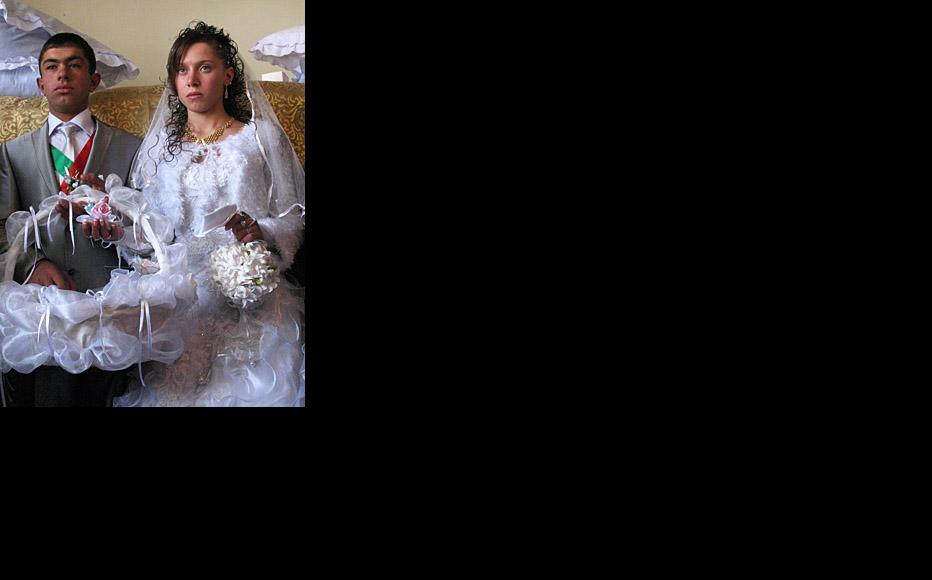 Sona and Omar at their wedding. (Photo: Lusine Avagyan) 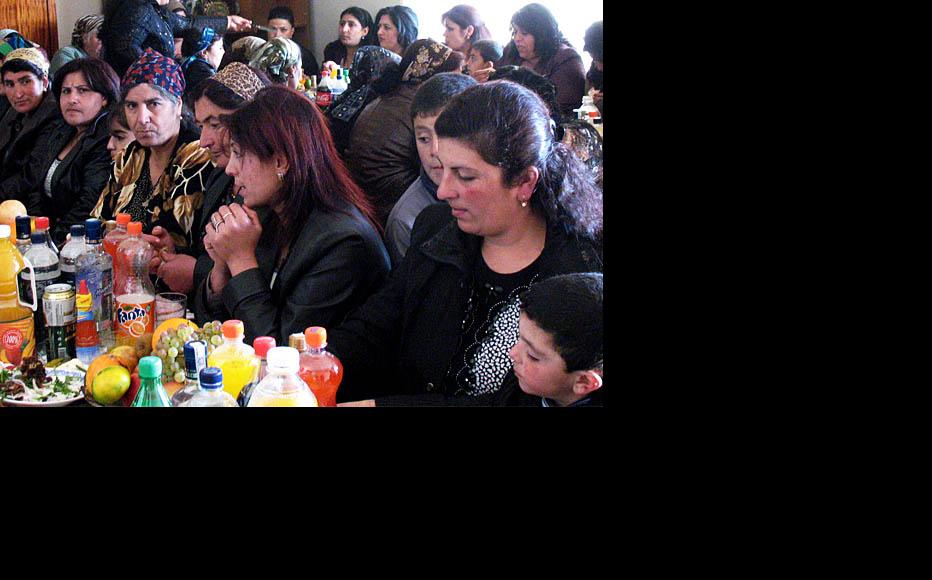 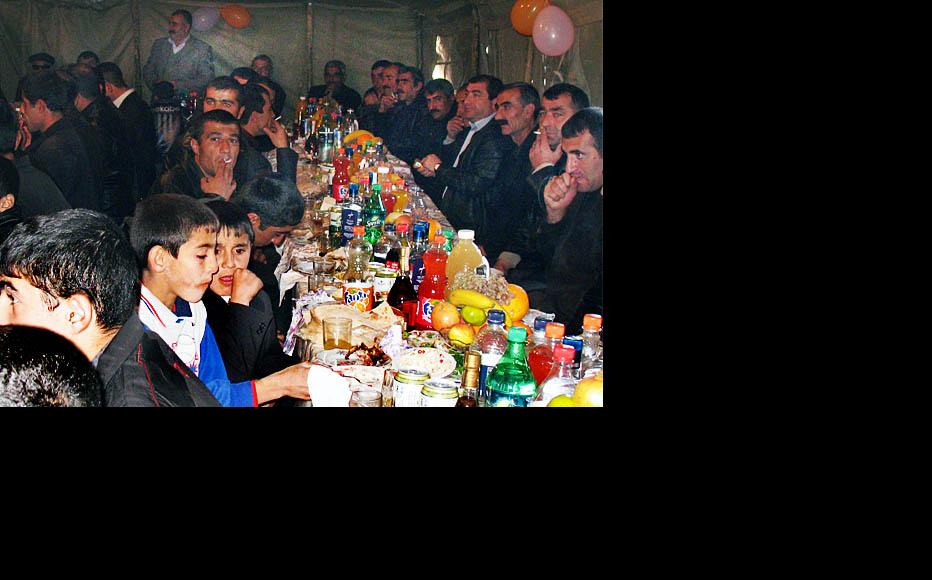 Wedding meal to mark the marriage of Sona and Omar. (Photo: Lusine Avagyan)
The link has been copied

At her wedding in the Armenian village of Mushakan, Sona Amoyan, 15, stands barefoot on a cold floor for half a hour while the wedding guests file past.

The traditions of her Yezidi community dictate that she cannot speak, sit or eat in the presence of her new in-laws.

Sona met her husband Omar, 16, for the first time at someone else’s wedding.

After marriage, she will stop going to school and will move in with his family.

Sona’s story is common among young Yezidi women in Armenia, who regularly finish school as early as 14 to prepare for marriage. Boys staying on a little longer before leaving to become shepherds, a traditional Yezidi role within Armenian society.

Activists worry that it is a practice which risks marginalising another generation of Yezidi women, but traditionalists say that marrying off girls young is a time-honoured tradition.

“It is a commonly-accepted law, and it’s going to continue like that. If a girl is mature, then I’m in favour of her getting married at 16,” Aziz Tamoyan, head of the National Union of Yezidis, said.

Even when mothers are unhappy about their daughters repeating their own experience, they say they are unable to stop the custom.

Lilia Avdoyan, 38, one of the guests at the wedding, said she always dreamed of becoming a doctor. When she was 16, however, her grandfather forced her to leave school and get married. The same prospect now awaits her 14-year-old daughter.

“My husband made our daughter leave school, and I was powerless,” she said. “The children often complain that they have to go and live in a different family. They are still too young, and everything is piled onto their shoulders,” she continued.

“Teachers at Armenian schools often try to persuade the parents of Yezidi children to rethink and not make their children leave school or at least postpone it for a while. But parents always have a ready-made answer, like ‘my child is ill’ or ‘she isn’t suited to school and doesn’t want to study,’” Avdoyan continued.

The Yezidis are a tightly-knit group who practice a unique faith and speak one of the Kurdish languages, are a growing community in Armenia, with families often having eight or ten children.

In the 2001 census, they numbered 40,000, accounting for just over one per cent of Armenia’s population, but according to Tamoyan the figure has reached 60,000.

At the wedding, Sona stands waiting for the guests to review her dowry. Only after that can Omar come into the room. He places a ring on her finger before leaving to celebrate with the other men. He has time, however, to forbid the women around his new wife to make up her face with cosmetics.

“Without her husband’s permission, a woman cannot use cosmetics or buy anything,” said Avdoyan. “She cannot deliver a toast, speak in the presence of her father-in-law, study or work.”

Inessa, 23, is proof that not all Yezidi parents insist on the old ways.

She has a university degree, and said her mother and father had supported her wish to gain an education. She said she advised others to try to finish high school as a minimum, but added that it was impossible to change the mindset of families that adhered to the old traditions.

Sona seizes a moment when Omar’s relatives leave the room to sit down for a while and rest her legs. Then she is taken to her husband’s home in the village of Mkhchyan.

Omar looks out of the window of the limousine as they move off, calling out to his bride’s neighbours, “We’re taking away a girl from your street.”

Back in Mkhchyan, before entering his house, Omar climbs onto the roof to try to hit his wife’s head with an apple – but fails. The ritual is intended to ensure a happy marriage and an obedient bride.

One of the onlookers, Arif, said that after his own wedding he threw an apple so hard he knocked his then 14-year-old wife unconscious and bloodied her nose.

“They gave her water, but she only came round after 15 to 20 minutes,” he recalled. “Why should I feel guilty? The law is the law. You need to hit their head with an apple. That is our custom. Even now if, for example, my wife doesn’t listen to me, or if she’s slow about bringing me a glass of water, I will beat her,” he continued.

At 33, Arif will become a grandfather early next year.

Anush Poghosyan, who works for the Women’s Resource Centre in Yerevan, said early marriages were a blight on the Yezidi community, but that it was very hard to do anything about them. She did not remember a Yezidi woman ever having appealed to the centre for assistance.

“A marriage sealed between teenagers is a violation of a whole series of rights,” she explained. “Specifically, it’s the right to control your own body, since often adolescent girls aren’t physically or psychologically ready for a sexual relationship.”

“Teenage marriage between teenagers is also a violation of the right to free choice,” she continued. “A teenager cannot take an informed decision, and often parents don’t listen to their children’s views and force them to get married.”

Hranush Kharatyan, an ethnographer in Yerevan who has studied the Yezidis, said there was little chance of change.

“The Yezidis are a closed society as a matter of principle,” she said. “Their traditions are important symbols for preserving their ethnic identity, which is ancient and changes very slowly. But prestige factors like taking the bride away from the wedding by limousine have become part of their customs, and sit side by side with the older traditions without changing them at all.”

After arriving at her new home, Sona stands in the centre of the living room and waits for the next part of the ceremony, in which her new mother-in-law gives her a gold ornament.

Finally, she is allowed to sit down.

Lusine Avagyan is a freelance journalist.

Armenia
Women
Connect with us