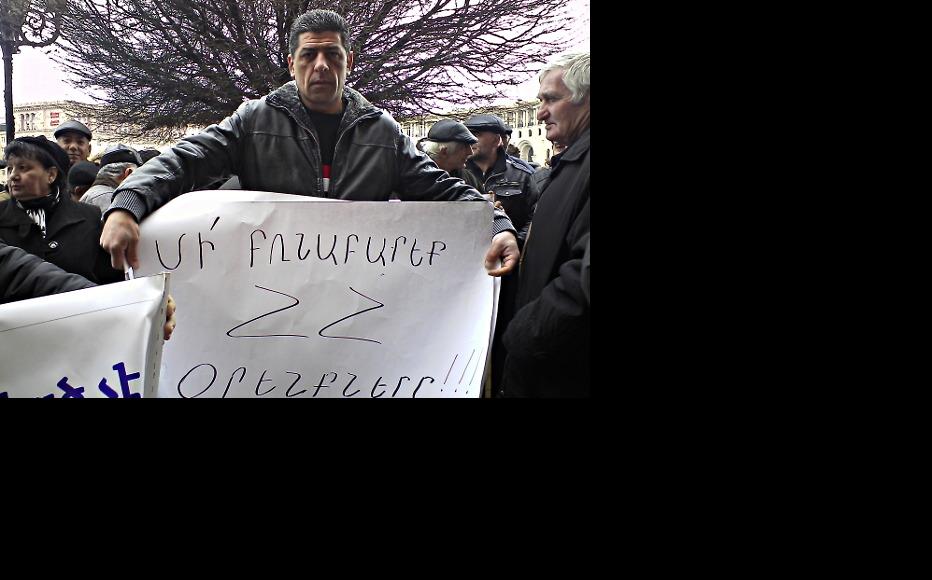 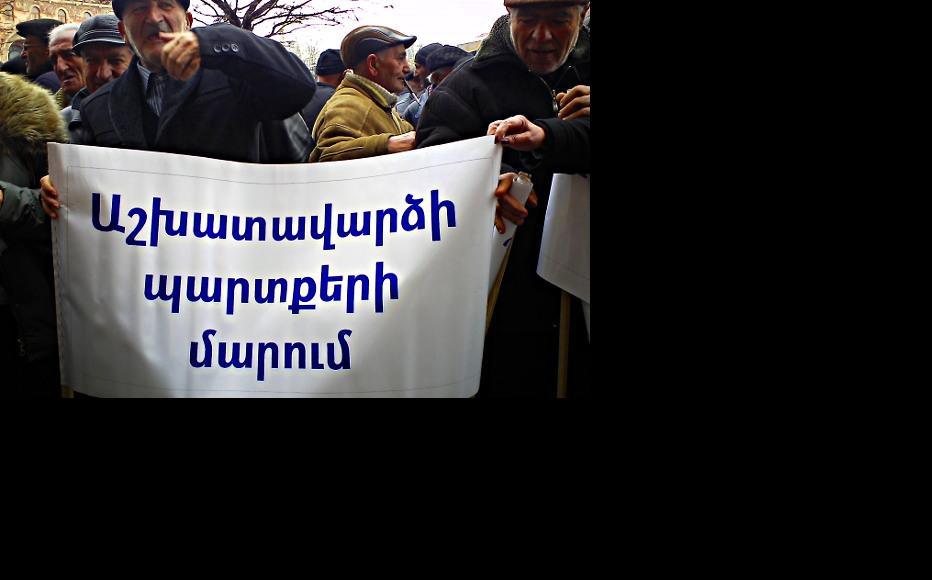 Sacked workers from the Nairit factory protest in Yerevan. (Photo: Ani Petrosyan)
The link has been copied

Any remaining hope of reviving what was once Armenia’s most prestigious industrial asset faded in January when most of the staff were fired. To add insult to injury, months of back wages owed to them remained unpaid, and they responded with demonstrations.

Based in the capital Yerevan, the Nairit plant once supplied synthetic rubber and other chemical products to the giant Soviet economy, but it closed in 1989 because of pollution concerns. After Armenia became independent in 1991, the plant reopened, and in 2006 it was privatised. However, it produced little more than ever-growing debt.

Last year, Russian energy firm Rosneft expressed interest in buying the plant . But that interest has waned, and a deal no longer seems likely.

In January, Nairit’s management sacked all 2,200 staff, hiring back about 490 of them to keep the plant mothballed. All workers received a final paypacket in February, covering one month’s wages, but this was hardly any consolation as they were still owed 18 months in back pay. This debt covers a period of about two-and-a-half years in which wages were paid sporadically but mostly not at all.

Company spokesperson Anush Harutyunyan told IWPR that the 487 staff members who were being kept on would receive their wages on a regular basis, but she was unable to say when everyone would get the money they were owed.

The redundant staff have made their feelings known at protests outside the government building and the presidential residence in Yerevan. They want a clear schedule of wage payments set out before March 16, otherwise there will be more trouble, including hunger strikes.

Tigran Minasyan is the only breadwinner in his household, and faces extreme hardship since he has only been paid one monthly wage of 120,000 drams over the course of many months. He came alone to the protest as he said none of his relatives could afford the bus fare.

“My daughter is a student but she's dropped out of university because we couldn’t pay her fees,” he said. “In his election campaign, the president said we were heading towards a ‘Secure Armenia’. Is this it, then? I wish they could spend a couple of hours in our position.”

The government insists that it is no longer directly responsible for the plant or its problems.

In December, Prime Minister Hovik Abrahamyan told workers that they had a right to demand their wages – but they should direct those demands to their managers, not to the government.

In 2006, the Armenian government sold the factory to a consortium called Rhinoville Property Limited that included Polish, United States and Russian companies, retaining a ten per cent stake. To raise enough funds to pay the government, the firm deposited its shares as security for a loan with the Inter-State Bank, an institution of the Commonwealth of Independent States. The factory’s debts continued mounting until they exceeded the value of the shares, so control reverted to the bank.

Former prime minister Hrant  Baghratyan, now a parliamentarian with the opposition Armenian National Congress, said the debt accrued over this period was as inexplicable as it was crippling.

He sits on a parliamentary subcommittee tasked with “resolving the basic problem at Nairit – the history of how an immense, 400 million dollar debt built up. In the difficult years between 1993 and 1995, Nairit operated without debt. So the history of this debt is incomprehensible.”

An explosion at the factory in 2009 brought operations to a halt.

It later transpired that things were more complicated, as revealed in an investigation conducted by journalists from Hetq Online. The consortium had paid the Armenian government the asking price of 39 million US dollars for a 90 per cent stake in Nairit. But the loan it took from CIS Inter-State Bank was 70 million dollars. Where did the rest go?

In January 2014, the Inter-State Bank won a court case awarding it 107 million dollars to be paid by Rhinoville, covering the 70 million dollar loan sum plus interest and penalty payments. The Armenian government has agreed to pay the sum.

But despite assuming this obligation, the government does not consider itself responsible for the 15 million dollars that Nairit staff are still owed.

On March 13, Energy and Natural Resources Minister Yervan Zakharian met workers at Nairit and talked about the options for repaying the debt. He said there were two views under discussion – selling off some of Nairit’s assets, and negotiations with the Inter-State Bank

Artsvik Minasyan from the opposition Dashnaktsutyun party sits on the parliamentary subcommittee on Nairit, and has strong views on the subject.

He argues that selling off parts of the plant in the hope of saving the whole makes no sense, since that will make investors less keen to buy it.

“I am sure that if it is to be relaunched, the staff will agree to having their wages delayed as long as they have jobs,” he said. “So it’s really important that the two issues are resolved in tandem – a relaunch and the repayment of what’s owed to the staff.”

In February, the World Bank agreed to hire consultants to assess the Nairit plant, the state of its equipment, its environmental impact, and its financial viability. Once this is submitted, the Armenian government will be able to decide whether it has a future.

The bank’s Yerevan director Laura Bailey told IWPR that the study was to have started in February but it took more time than anticipated to find the right experts to do it.

Ani Petrosyan  is a freelance journalist in Armenia.

Armenia
Accountability, Economy
Connect with us