Health ministry says it is making inroads, but stronger laws would help.

Health ministry says it is making inroads, but stronger laws would help. 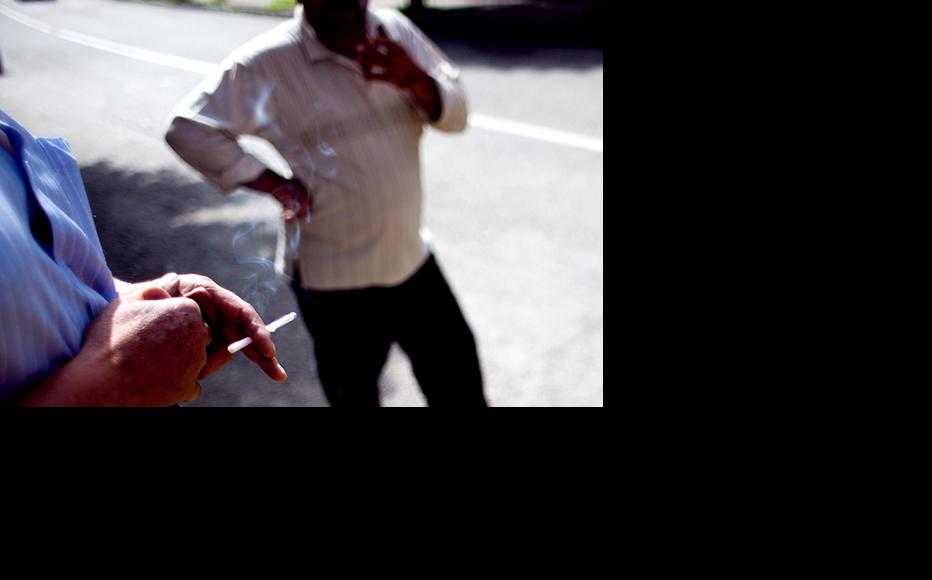 Armenia's health ministry is concerned at the high level of smoking-related disease. (Photo: Inna Mkhitaryan)
The link has been copied

Armenian health officials say they have made some progress towards reducing the current high rates of smoking, but critics say hard-hitting legislation is slow in coming.

Men are far worse offenders than women, and according to one survey done in 2010, over 60 per cent of males between the ages of 15 and 47 smoke.

“Smoking among men in particular is a public health problem,” said Arusyak Harutyunyan of the Coalition for a Tobacco-Free Armenia.

In 2010, the government set up a special commission in to coordinate efforts to reduce smoking. It has also produced public health adverts, trained doctors in how to get patients to quit. Although ministers have submitted half a dozen bills to parliament, legislators have yet to pass a law aimed at restricting tobacco consumption.

The latest edition of the American Cancer Society’s Tobacco Atlas ranks Armenia third in the world for the proportion of deaths caused by smoking-related conditions.

“About 3,000 to 4,000 people die of tobacco-related illnesses every year,” said Alexander Bazarchyan, who heads the health ministry’s public health department and coordinates of its Tobacco Control Programme.

Bazarchyan said 50 per cent of all deaths in the country are caused by heart disease, and another 20 per cent by cancer.

He said the efforts made so far were already producing results.

“The campaign is generally considered effective if the annual decline in the number of smokers is between one and 1.5 per cent. On that basis, we can say the numbers have been cut by four per cent in the last four years,” he said. “Ten years ago, no one would complain if people smoked in buses or in high-end shops and restaurants. But the mindset of a certain section of society has changed.”

What was needed now, Bazarchyan said, was tougher legislation.

“There has to be a 100 per cent price increase and tight restrictions on advertising. Distribution and availability of tobacco must be limited as well,” he said.

The government has already instructed the justice ministry to draft a new bill placing greater restrictions on the sale and consumption of tobacco, removing them from display in supermarkets, and requiring restaurants and cafes to set aside non-smoking areas.

An earlier version of this bill went before parliament for debate in October, but was withdrawn the same day.

According to Narine Movsisyan of the Coalition for a Tobacco-Free Armenia, “At 11 in the morning, Speaker Hovik Abrahamyan announced that the bill would be on parliament’s agenda, but at four in the afternoon the same day, he said the government had withdrawn the bill. One can only guess at what happened between 11 and four.”

Justice ministry spokesperson Karine Kalantaryan told IWPR the bill had been withdrawn for further amendment, but declined to give any information about these changes.

Anti-smoking activists were concerned that the bill’s hasty withdrawal coincided lobbying from the tobacco industry, which includes two of the top ten taxpayers in Armenia.

“We are entirely convinced that the tobacco businesses were against the bill,” Movsisyan said. “The public interest must kept clearly separate from business interests.”

Tobacco companies denied lobbying against the bill. Vahram Brutyan, who works as spokesman for both Grand Tobacco and International Masis Tabak, told IWPR that the two companies would support all the restrictions currently being considered.

“Local manufacturers support the idea of separate rooms for smokers and banning cigarette advertising in supermarkets. We’re even in favour of removing tobacco products from public view – a practice common in many European countries, the United States and Canada,” he said.

The Armenian president’s office funds a number of non-government organisations to run anti-smoking programmes, using the Development and Integration group as intermediary.

Fourteen NGOs received funding between 2008 and 2011, although there are questions about their visibility and effectiveness. IWPR tried to contact them, but none was listed in the phone directory or on the internet.

Movsisyan said her coalition had repeatedly contacted the president’s office for further information, but found it “impossible to find out what kind of projects had been carried out with the funding”.

A spokesman for the presidential administration was unable to tell IWPR how projects were supervised or how effectively the money had been spent.

Lia Khachatryan, head of Development and Integration, said one of the groups now being funded, Healthcare Forum, was expected to launch an education programme in September. The NGO itself was only set up in January.

“We usually offer grants to start-up NGOs so as to give them a chance to launch their activities,” she said.

Sara Khojoyan is a freelance journalist in Armenia.

Health
Connect with us