Specific legislation is nearly ready, but campaign groups say there is no political will to drive it through.

Specific legislation is nearly ready, but campaign groups say there is no political will to drive it through. 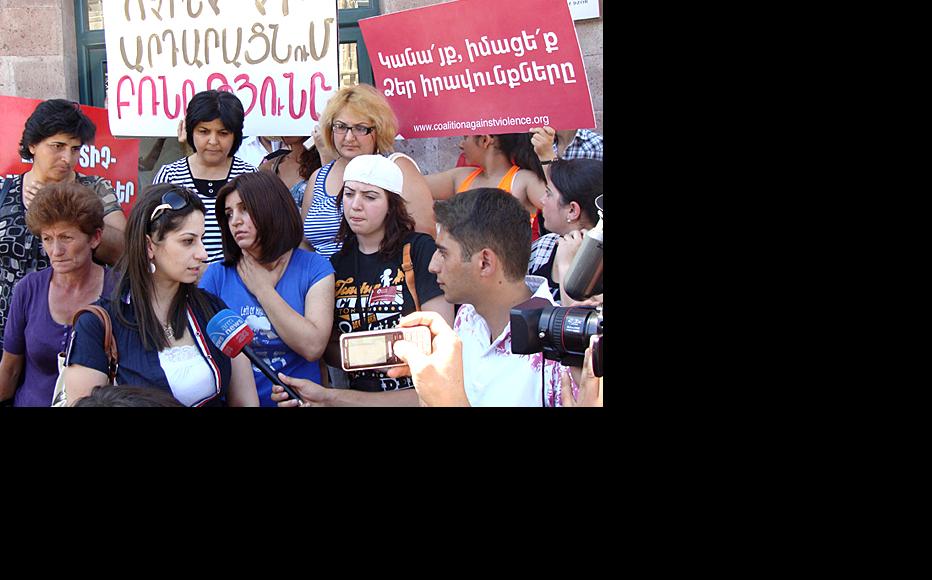 Demonstration by rights activists in Artashat, where a high-profile domestic abuse case has gone to trial. (Photo: Coalition Against Violence)
The link has been copied

Campaigners in Armenia say they are frustrated with the four-year delay in passing legislation on domestic violence, and question whether officials are really committed to making it happen.

Until a specific law is enacted, they say, it will be hard to prosecute offenders and protect vulnerable women.

In one high-profile case, Haykunash Mikaelyan is currently on trial for abusing her daughter-in-law Mariam Gevorkyan. Prosecutors were able to file criminal charges because actual injury had taken place.

Last year, Gevorgyan returned to Armenia from Russia, saying she had suffered abuse from her husband and mother-in-law in the ten months she was married and living in that country.

“They were always finding new reasons to beat me – ‘you slammed the door’, or ‘you did the housework too slowly’. If I complained, they beat me for talking too much,” she said.

Her husband David Ziroyan was prosecuted but was later freed under a general amnesty.

Mikaelyan denies any wrongdoing and says the broken nose, bruises and burns that Gevorkyan had when she returned to Armenia were the result of a disease.

Rights activists have held demonstrations outside the court in Artashat every day of the hearings in the Gevorkyan case, to demand that it take place in open rather than closed session.

Gevorkyan’s lawyer Nona Galstyan said the fact that domestic abuse had to be dealt with under general criminal law rather than as a particular offence made it much harder to win court cases.

“The absence of a law means that female victims of domestic violence are often left defenceless. The police will not launch a criminal case unless serious injury or death has taken place,” she said.

Lara Aharonian, head of the Women’s Resource Centre, agreed, saying, “If there was a law, it would be far easier to prosecute cases like Mariam’s and others. At the moment, we have a very limited number of legal options.”

The non-government Women’s Rights Centre gave higher totals based on its own findings, in which 66 per cent of respondents reported psychological abuse and 30 per cent domestic violence.

Between January and September this year, 700 women called the centre’s hotline to report cases of physical, sexual or psychological abuse.

The Women’s Rights Centre drafted a law on domestic violence in 2007 and submitted it to the labour and social affairs ministry two years later.

Petrosyan endured two years of assault during her two years of marriage. In October 2011, her husband Yanis Sarkisov was sentenced to ten years in prison for her murder.

The case prompted seven NGOs to form a coalition to press the authorities to pass the law.

“Zaruhi’s death, while tragic, really helped to raise the issue of domestic violence all across Armenia,” Aharonian said. “With public pressure on one side, and pressure from international organisations [concerning] the government’s obligations on the other, the state was forced to address the law.”

The labour and social affairs ministry began serious work on the issue in May 2011, setting up a working group.

This coincided with a report from the United Nations Committee on the Elimination of All Forms of Discrimination Against Women, which accused the Armenian authorities of doing too little to curb domestic abuse.

On November 13, 2012, the ministry finally published a draft bill for public discussion.

In its present form, the law would allow courts to impose tougher penalties for domestic violence and give police new mechanisms for preventing it, such as issuing formal warnings and intervening directly. Police would be able to impose 72-hour exclusion orders while they looked into a case, and courts could then extend this.

“We are not late; we are approving this law right on time,” insisted Lala Ghazaryan, head of the ministry’s department for women and children. “It’s a very serious problem and drafting the bill has been extremely labour-intensive.”

However, deputy minister Filaret Berikyan warned of further hold-ups because the bill would need to comply with a new Council of Europe convention on domestic violence.

“Our country intends to join the convention in future, and that means the law would have to be amended anyway,” he said.

Davit Amiryan, deputy director of Open Society Armenia, which has supported the bill, expressed concern at the prospect of further delays.

“Time after time, they find new reasons not to submit this law to the government and parliament for approval.,” he said. “In May 2010, the Armenian representative in Geneva said the law was going to be approved soon. The facts demonstrate that the reason why this law hasn’t been passed is that there is no will to do so.”

Amiryan said the key to progress was for officials to acknowledge the problem, which meant “viewing it from a rights perspective, not as something to do with history, culture, traditions or religion. If we don’t view it as a violation of human rights, then we’re never going to resolve it.”

Mary Aleksanyan is a journalist who writes for the www.hra.am website in Armenia.

[Correction: it was the Women's RIghts Centre, not the Women's Resource Centre, that drafted the law. Apologies for the confusion.]

Armenia
Rule of Law
Connect with us