Supplies have yet to arrive in the country – and then there is public scepticism to overcome.

Supplies have yet to arrive in the country – and then there is public scepticism to overcome. 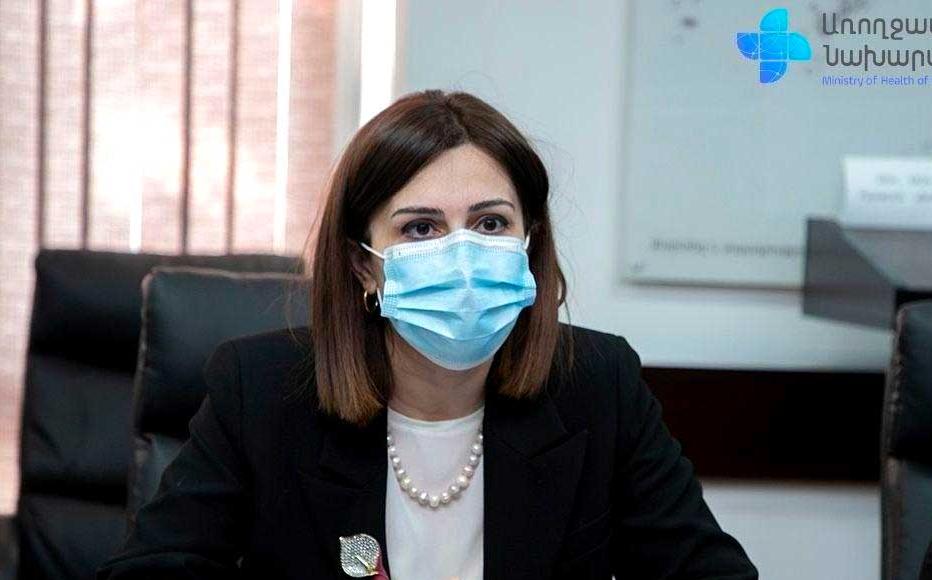 Minister of Health Anahit Avanesyan. © Ministry of Health of the Republic of Armenia
The link has been copied

Valentina Karapetyan, a 42-year-old teacher, is eagerly waiting for Covid-19 vaccinations to begin in Armenia.

“Within a year I lost my father and my father-in-law because of Covid-19, my husband was severely infected too,” she said. “I understand that vaccines can protect us, especially our parents and elderly people. I think I will be one of the first volunteers to get the vaccine. I was not infected myself, but I know what this disease did to my family.”

However, she may have a wait ahead of her. Health minister Anahit Avanesyan has only now confirmed that Armenia has approved the use of the AstraZeneca, Pfizer and Sputnik V vaccines, and no supplies have yet been purchased.

Nonetheless, the official plan is for about three per cent of the Armenian population to receive Covid-19 vaccines by early March. Officials have announced that vaccines will first go to residents and employees of care homes, medical personnel, those aged 65 and older and patients with chronic diseases. The next stage will include teachers, military personnel, civil servants, justice sector employees and people working on public transport.

“When the first stage of vaccination is completed with the priority categories, taking into account the epidemiological situation in the country, the availability of the vaccines and the epidemiological patterns, a decision will be made on what mechanism and timing can be applied for the vaccination of other categories of the population,” said Svetlana Grigoryan, who heads the immunisation department at the national centre for disease control and prevention.

The European Union and the World Health Organisation will provide 40 million euros for three years to the Eastern Partnership countries - Armenia, Georgia, Azerbaijan, Belarus, Ukraine and Moldova - to ensure access to the coronavirus vaccine.

Last year, Armenia also joined the COVAX international initiative, which aims to ensure parity in distribution and access to the vaccine for all interested countries.

Gayane Sahakyan, deputy director general of the National Center for Disease Control and Prevention, said that the Covid-19 situation in Armenia had stabilised, with the infection rate starting to decrease. There were also enough coronavirus tests to continue monitoring, she added.

“Most often, the cases of coronavirus infection cover the age category of 55-60 years old. The mortality rate is 1.8 per cent.”

Anahit Harutyunyan, 72, is happy to be included in the first wave of planned vaccinations. She caught Covid-19 last autumn last year and found it hard to recover.

“I have diabetes and I live alone, so it is very important for me to get a vaccine and not to get reinfected,” the Yerevan resident said. “Many people refuse or are afraid of getting vaccinated, but I trust the vaccine. For ten years I have been getting vaccines against the seasonal flu, while many do not even take this simple vaccine.”

Indeed, vaccination will not be mandatory, and as in many other countries the health authorities expect there to be some resistance to the programme.

Juliet Gevorkian, 55, does not plan to be vaccinated, claiming that in other countries some people died after receiving the jab.

“I am scared and do not trust it,” she said. “Maybe sometime later I will change my mind and get it, when I see that everybody is being vaccinated.”

In an attempt to win public confidence, the then-minister of health Arsen Torosyan was publicly vaccinated along with 14 other officials last November when his Russian counterpart Mikhail Murashko personally delivered the first samples of the Sputnik V vaccine.

Sahakyan was among them and said that no-one had experienced any side-effects.

“No complications were observed after the vaccination. Even the most commonly known effects - redness and pain at the injection site – weren’t reported,” she said. “The first clinical trials of Sputnik V showed that the efficacy after the first shot is 91.4 per cent, and 94 per cent after the second one. The vaccine mainly prevents mortality and severe clinical symptoms. A person can be infected, but with milder clinical symptoms, which does not mean that the vaccine is not effective.”

The AstraZeneca vaccine in particular has been the subject of widespread rumour on social media, partly because of its low price.

“In terms of quality, we need to pay attention to the safety of the vaccine. At the moment, there are some stories about AstraZeneca and Pfizer that some people died after vaccination, but later these rumours were denied,” Sahakyan said.

Public health expert and Yerevan Medical University lecturer Hrant Melik-Nubaryan said that the AstraZeneca jab had been tested in Great Britain, Brazil and South Africa, with an efficiency rate of between 62 and 90 per cent.

“This is not a bad result, although in comparison with the other three vaccines, it is a bit lower. But if we compare the seasonal flu vaccine, for example, it has an efficiency of 58 per cent,” Melik-Nubaryan said.

He acknowledged that Armenia faced some challenges convincing the public to accept the rollout, given mistrust in vaccination.

Previously there was an outcry when the Gardasil vaccine against HPV was introduced for 13-year-old girls in December 2017. Although this was a simple way to protect against future cases of cervical cancer, negative stories flooded social media and many parents did not allow their daughters to be vaccinated.

“It is essential to be prepared for vaccination, to have a detailed plan,” he said. “It is necessary to communicate with people and carry out some educational work, since there was a bad experience with HPV vaccines.

“I think we need to learn from past mistakes and send people the right messages and prepare them for vaccination,” Melik-Nubaryan continued. “It can be expected that there will be a huge wave of anti-vaccination [feeling] against coronavirus vaccines.

Giving Voice, Driving Change - from the Borderland to the Steppes, Coronavirus Pandemic
Armenia
Health, Coronavirus
Connect with us