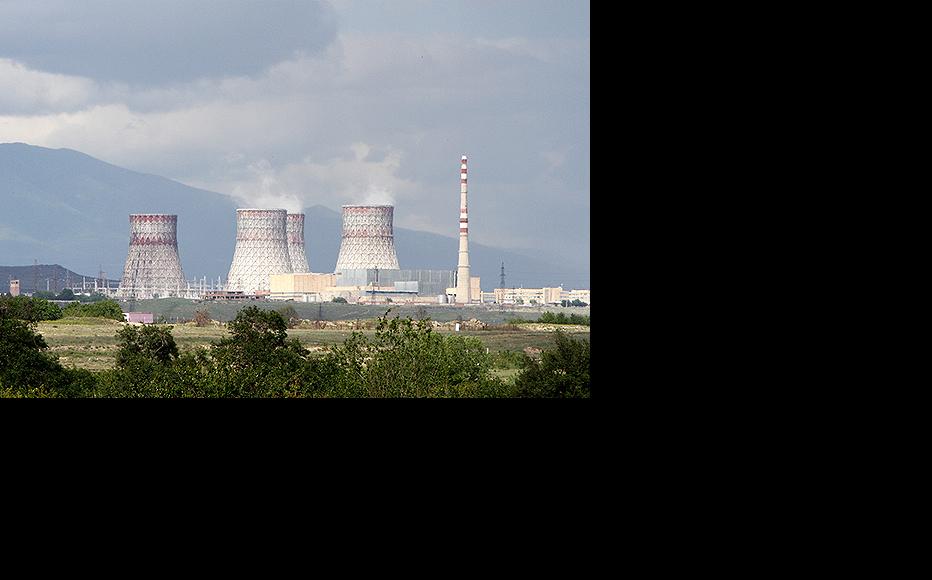 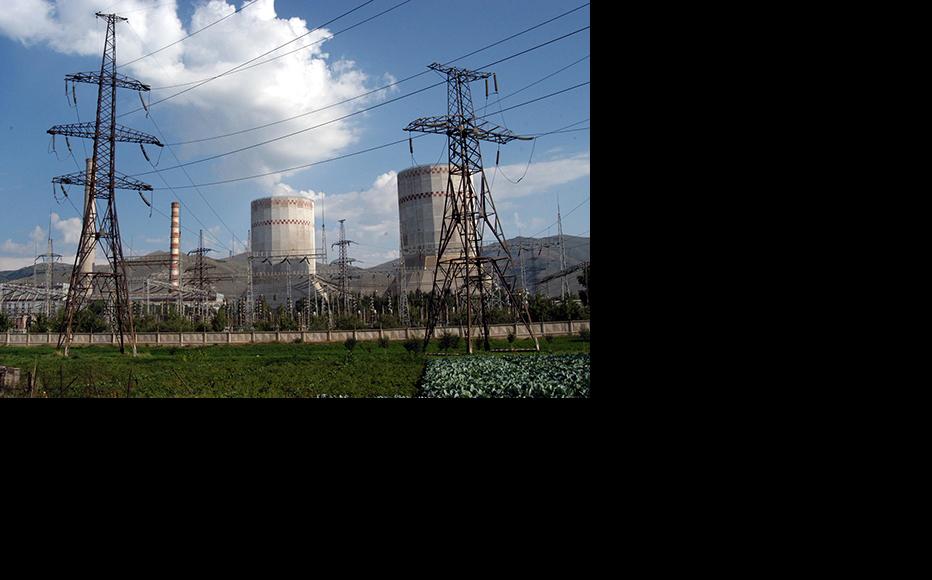 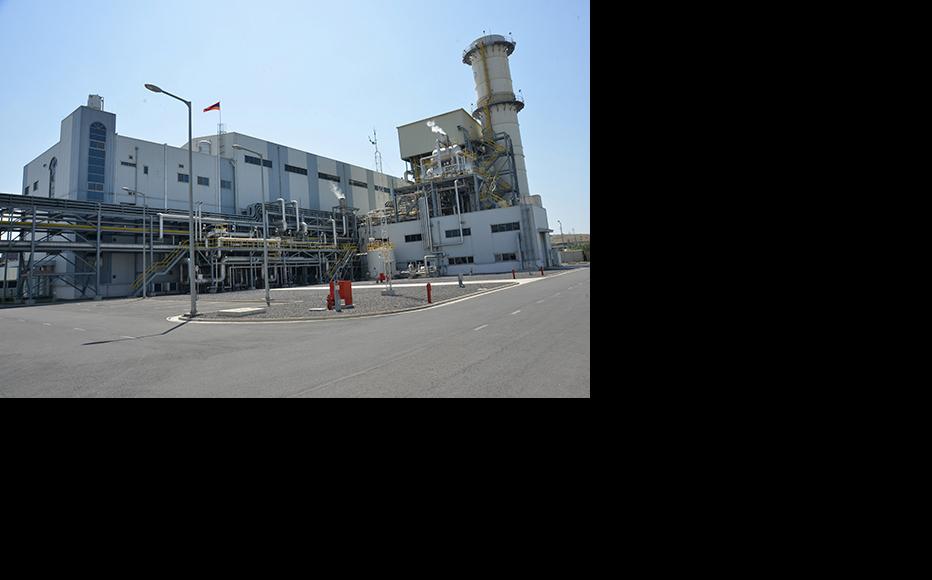 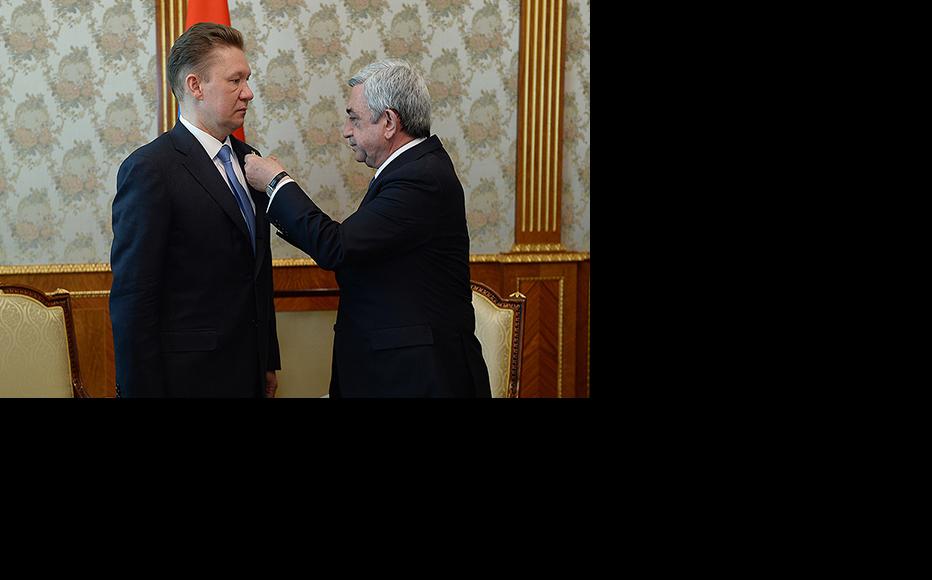 Serzh Sargsyan awarded order of friendship to Alexey Miller, Chairman of the Management Committee of Russian Gazprom. (Photo Courtesy of The official site of the RA president)
The link has been copied

Critics have accused the Armenian government of reducing electricity and gas tariffs as a political ploy ahead of elections next April.

Just over a year after mass protests in the capital Yerevan over a controversial 16 per cent hike in power prices, gas charges were reduced on July 1 and electricity on August 1.

On September 15, Armenia´s newly appointed prime minister Karen Karapetyan called for a further revision.  He asked the Public Services Regulatory Commission (PSRC), the ministry of energy and natural resources and the ministry of labour and social affairs to submit joint proposals.

At first glance, the price difference was not large. Electricity only decreased by three drams per kw/h, bringing the daytime price to 46.2 dram per kW/h (around ten cents) and the nighttime tariff to 36.2 drams (around eight cents).

But after 15 years of continuously rising energy prices – for example, in 2009, electricity cost only 25 drams (5 cents) per kW/h - this change in policy was viewed as remarkable.

Aram Manukyan, the secretary of the Armenian National Congress parliamentary faction, said the move could be attributed to the authorities´ attempts to placate voters ahead of upcoming elections in spring 2017.

The four-day war between Azerbaijani and Armenia-backed troops over Nagorny Karabakh in early April had revealed systemic problems under the current leadership of the president, he said.

“The political and economic problems of our country have become much more pronounced against the background of the April war,” Manukyan continued.  “A weak economy cannot maintain a strong army.  Such a system cannot build a prosperous society with equal opportunities,” he said.

Experts note significant social discontent over the April war and the subsequent negotiations between Azerbaijan and Armenia with Russia as a mediator.

This became evident in July when armed men, who included veterans of the Karabakh war in the early 1990s, seized a police station in Yerevan that led to a two-week standoff and drew unexpected public support.

Zahuri Postanjyan, a member of the board of the Heritage Party, agreed that this was an attempt to win public sympathy.

“At this level of poverty, injustice and after the April war, the authorities are trying to make every effort to create a positive atmosphere.  Since they cannot boast any economic achievements, progress in democracy or military successes, they have no choice but to resort to such actions as the reduction of tariffs or changing the prime minister and ministers,” she said.

The PSRC had justified last June’s seven dram price rise by saying that the Electric Networks of Armenia (ENA), the body responsible for the national transmission of electricity, had suffered losses of 228 million US dollars.

The national press then reported that these losses were due to bad management, which the company had tried to recoup at the consumers’ expense.

But the PSRC stood firm, conceding only to offer subsidised rates to citizens using up to 250 kW a month.

“What is absurd is that the ENA began to accumulate debts and losses from prior years, while continuously raising electricity prices,” Manukyan said.  “I see a risk of corruption here.  It is more than strange that the authorities did not notice such an outcome in one of the largest companies in Armenia for many years, or noticed, but did not do anything, which is even stranger.”

The Electric Networks of Armenia, acquired by the Russian company Inter RAO UES in 2006, was sold in September last year to the Tashir Group owned by Samvel Karapetyan, a Russian billionaire of Armenian descent.

According to Garegin Baghramyan, the head of the PSRC tariff policy unit at, prices were lowered on August 1 after ENA´s losses were recovered.

However, the tariff was reduced by only three drams instead of seven drams because the Metsamor nuclear power plant, about 30 kilometres west of Yerevan, “will temporarily shut down for two months this autumn and two months in spring for reconstruction,” Baghramyan said.

Metsamor is the only nuclear power plant in the South Caucasus and produces around 30 per cent of Armenia´s electricity.

“The difference of the electricity used should be compensated by thermal power stations that produce more expensive energy than atomic power plants,” he said.

The lowering of gas prices was due to an agreement between Russia and Armenia signed during Prime Minister Dmitry Medvedev’s visit to Yerevan on April 7.

Armenia now pays 150 US dollars per 1,000 cubic metres for the delivery of Russian gas to the Armenian border.  Previously, it was 165 dollars.

The agreement was widely viewed as an attempt to appease Armenian outrage over Russia supplying advanced weapons to Azerbaijan during the April war.

Although the agreement went into effect on April 1, the PSRC decided that gas consumers would start paying lower prices only as of July 1.

As a result, although Armenia imported gas at a reduced cost for three months, consumers continued paying the higher price.

Gazprom Armenia, a subsidiary of the Russian gas giant, has a monopoly for operating the gas supply from Russia via Georgia to Armenia´s domestic gas market.

It said it had received 7 billion drams (14.7 million dollars) in additional revenues between April and July and plans to use them to repair the gas supply system.

This means that the price for Armenian consumers is twice as much as the price for which it is sold to Gazprom Armenia at the border. In 2009, the difference was 77 dollars. Currently, it is 155 dollars.

The general director of Gazprom Armenia, Vardan Harutyunyan, explained the difference was due to the “expenditure for technical service and operation of gas distribution in the country”.

According to the customs service of the State Revenue Committee of Armenia, Armenia imported 1,005 billion cubic metres of gas in the first half of 2016, of which 818 million cubic metres came from Russia and the remainder from Iran.

In January 2014, Armenia ceded control over all natural gas infrastructure to the Russian firm Gazprom and committed itself not to buy gas from elsewhere until 2043.  Gazprom acquired the 20 per cent of the ArmRosGazprom it did not already own.  In return, debts owed to the Russians were written off.

The Armenian gas distributor was then renamed Gazprom Armenia.

Gazprom also runs the gas pipelines from Iran and on to Georgia.

There is continuing discomfort among the Armenian public about Russia´s control over the Armenian energy market.

Daniel Ioannisyan, programme coordinator of the Union of Informed Citizens NGO, said that gas and electricity would be much cheaper if the energy market in Armenia was not monopolised by Russia.