Police intervention only increased the number of people on the street.

Police intervention only increased the number of people on the street. 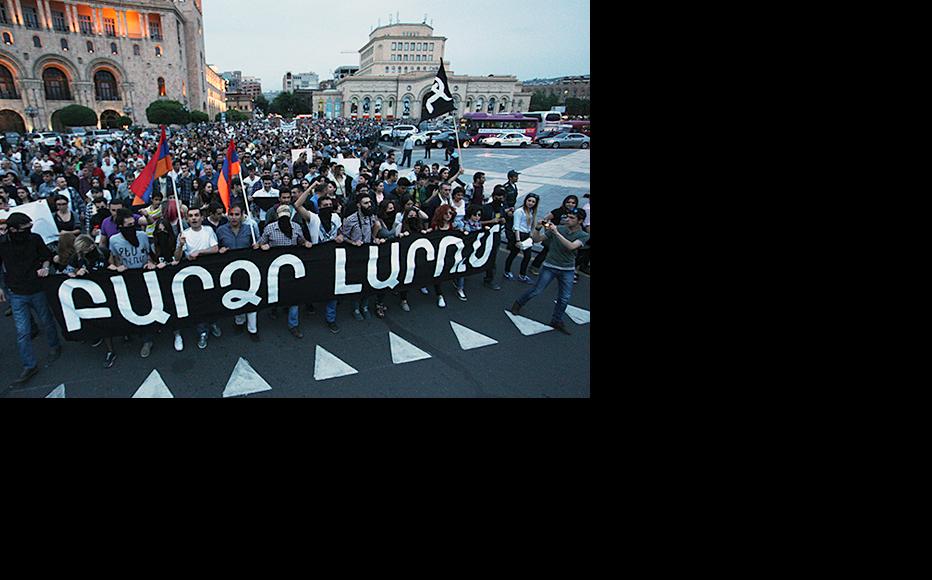 Demonstration in Yerevan against the electricity price hike. This is an early one on May 27, 2015. (Photo: Photolur agency)
The link has been copied

In Armenia, what began as a fairly run-of-the-mill protest about utility bills has grown into a more sustained and more determined movement. After a heavy-handed police deployment only served to swell the protesters’ ranks, the authorities may now be stepping back and playing a waiting game.

Demonstrations, marches and sit-down strikes against a rise in electricity charges have now being going on for a week in the capital Yerevan and other towns, and they show no signs of abating. They seem on a different scale from similar protests that took place last year.

Police waded in on June 23 to break up the crowds in Yerevan but that only seemed to stiffen their resolve and encourage more people to take to the streets.

The protests, led by the No to Robbery movement, began on June 19, two days after the Public Services Regulatory Commission approved an increase – the third in as many years – in the prices charged by Electric Networks of Armenia (ENA), the monopoly power company owned by the Russian firm Inter RAO UES (United Energy Systems). (See Another Year, Another Electric Shock on the price hike controversy.)

A rally in Yerevan’s central Freedom Square called for the decision to be reversed, and the 400 to 500 participants threatened to march on the presidential palace if this did not happen. On the evening of June 22, they set off anyway, but police barred the way.

The city’s police warned that they would use force if they had to, but the demonstrators refused to budge and spent the night on Baghramyan Avenue.

The same evening, President Serzh Sargsyan said he was prepared to meet three or four representatives, but the protesters turned this down on the grounds that they had no leaders, and the president should address them all.

"We said we were not going to negotiate with the authorities,” No to Robbery activist Artush Chibuhyan told IWPR. “We will simply demand the annulment of the decision to increase electricity prices.”

At dawn the next morning, June 23, uniformed police assisted by plain-clothes officers moved in. Using water-cannons and sheer force, they dispersed the crowd. Nearly 240 people, some of them journalists, were detained, and more than 20 taken to hospital with bruises and fractures.

Late on June 22, police used water-cannon to break up a protest in another city, Gyumri, detaining several dozen activists.

The United States and British embassies, the European Union delegation in Armenia, Human Rights Watch and Amnesty International all issued statement of concern about the level of force the police used. Armenia’s own human rights ombudsman, Ombudsman Karen Andreasyan, began an investigation into this violent intervention in a peaceful protest.

Armenia’s police chief, Vladimir Gasparyan, insisted that the force used was not excessive, but that the streets needed to be cleared. He did apologise to journalists, many of whom were roughed up and detained and had equipment smashed, and promised an internal investigation into this.

"The police actions were appropriate, and as a result there weren’t the same serious injuries that have occurred in the past,” he said on Gala TV. “Where there were flaws, they will be corrected in the new future.”

The result of the police interventions was that protests resumed in both Yerevan and Gyumri. In the capital, the crowds swelled from hundreds to thousands. On the evening of June 23, several thousand demonstrators went from Freedom Square to Baghramyan Avenue, and promised to stay there until their demands were met.

Police refrained from further major actions against the demonstrators.

"I think that after the events of June 23, the authorities have realised that coercive methods are ineffective, since the outcome has been more and more people on the streets,” political scientist Sergei Minasyan told IWPR. “That is why in the days that followed, we have seen completely different behaviour from the police."

On June 25, Prime Minister Hovik Abrahamyan said the government would stand firm on the electricity price but would offer subsidised rates to 105,000 vulnerable households.

Minasyan, who is deputy director of the Caucasus Institute in Yerevan, notes that this is a grassroots protest movement unconnected with Armenia’s opposition parties, although that might change over time. (See our story from last year about the connection between protests and the formal opposition.)

Minasyan doubts that the government will make significant concessions even if it refrains from ordering further robust police action.

"Right now, the government is trying to buy time,” he said. “It’s attempting to get the tensions to subside so that the movement fades away. In this case, the authorities have time on their side.”

Alina Vardanyan is the pseudonym of a journalist in Armenia.

Armenia
Opposition, Protests
Connect with us