Armenia: Domestic Abuse Bill Back on the Table

After past failures, campaigners are optimistic that parliament will pass the new legislation this time round.

Armenia: Domestic Abuse Bill Back on the Table

After past failures, campaigners are optimistic that parliament will pass the new legislation this time round. 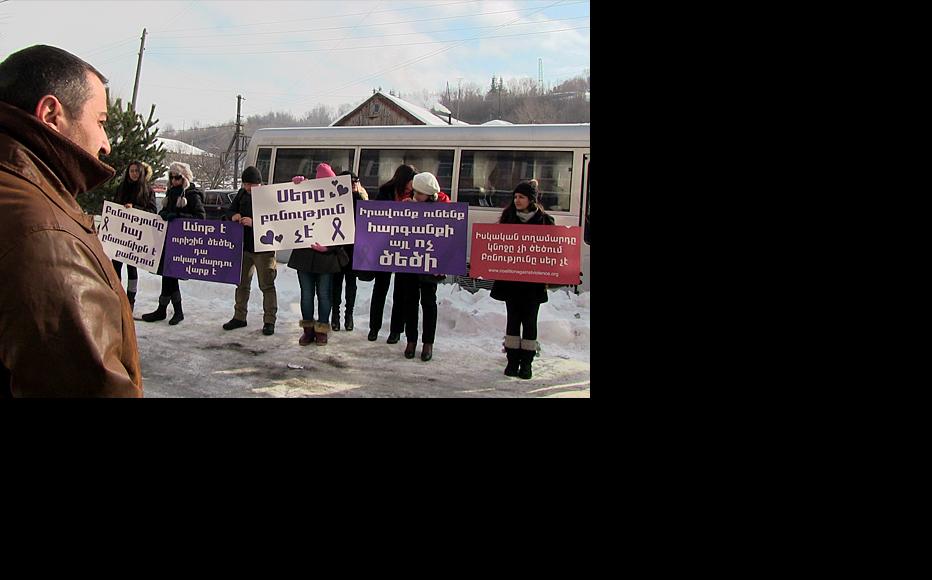 Campaigners against domestic violence demonstrate outside the Gegharkunik regional court. (Photo: Ani Hovhannisyan)
The link has been copied

Pro-government and opposition politicians in Armenia are about to begin work on a long-awaited domestic violence law that will define offences and set out procedures to support victims and prosecute perpetrators.

A local non-government organisation, the Coalition to Stop Violence Against Women, has been working on the bill for more than a year, and a working group made up of lawmakers and NGO representatives will revise the document next month before submitting it to parliament.

The new bill comes after parliament rejected similar legislation two years ago on the grounds that it was incompatible with Armenia’s justice system. The decision caused outrage among activists who had spent six years preparing the draft law. (See Domestic Abuse Law Dumped in Armenia.)

Anna Nikoghosyan, executive director of the NGO Society Without Violence, told IWPR that in 2013, the authorities lacked the political will to pass the legislation. But unlike last time, activists are now expecting a fruitful debate in parliament because politicians themselves have expressed a willingness to discuss the law.

"The lack of legislation is the first hurdle in the fight against domestic violence, as legal and judicial institutions currently tend to punish perpetrators if the woman dies,” Nikoghosyan said. “But when the woman survives and is repeatedly subjected to violence, the perpetrator is acquitted or given an insufficient length of sentence.”

Nikoghosyan said this was because the law enforcement agencies were ignorant of the issues.

The authorities do not keep statistics on domestic violence, as separate from generic crimes like assault.

One case that has been reported extensively in the media is that of Sargis Hakobyan, who repeatedly assaulted and humiliated his wife, Hasmik Khachatryan, over a period of nine years.

The case is a clear example of the trend Nikoghosyan describes. Following a year-long trial, a judge in the eastern Gegharkunik region sentenced Hakobyan to one-and-a-half years in jail. But instead of sending him to serve his sentence, the judge immediately granted him clemency and released him.

During the trial, there was both live testimony and a substantial forensic evidence to show that Hakobyan abused Khachatryan, gave her cigarette burns, repeatedly hit her with various objects, and punched and kicked her in the head.

The last time Khachatryan was beaten by Hakobyan, she fled from the house and she spent the rest of the night hiding outside. The next morning she got in touch with her parents to ask if she could go and stay with them.

"I thought it was better for me to die than to lead such a life,” Khachatryan said. “When he beat me the last time, I thought I wouldn’t live to see the morning.”

In court Hakobyan denied the charges against him and argued that as a husband he was entitled to hit his wife.

Khachatryan’s lawyer, Nona Galstyan, said the judge also cited a technicality – although the couple went through a church wedding, they did not register the marriage with the civil authorities, so the victim was not a dependent of her husband.

Galstyan argues that this was a misreading of the law, which states that a person can be dependent on someone else in various ways – financially, physically and psychologically.

Khachatryan has appealed against the verdict, and says she is prepared to fight as long as it takes to get redress for the abuse she suffered.

According to Galstyan, who was involved in drafting the new domestic violence bill, it will prevent judges from acquitting or releasing perpetrators as happened in this case. The law also required the state to support victims, who currently have few places to turn to and are often forced to carry on living with the perpetrator.

Arpine Hovhannisyan, a Republican Party member of parliament MP of the Republican Faction at the National Assembly, told IWPR how important it was to get the law’s wording right so that it would be enforceable.

“One should first note that the bill has still to undergo lengthy discussions both inside the National Assembly’s chamber and outside it,” she said. “It’s beyond dispute that the law has to include provisions that can actually be enacted. In other words, we cannot succeed unless a law is passed – and not one that is just a declaration – that specifies a comprehensive set of procedures, and become a basis for preventing and eliminating violence.

At the moment, it is NGOs that provide all the legal and psychological support available to victims.

Armenia’s capital Yerevan only has one shelter that accepts women affected by abuse, including those who would be at risk if they returned to the family home.

The refuge is run by the Centre for the Assistance of Women, and provides shelter to 35 women a year, although there are several times more applicants than it can accommodate.

One of the centre’s caseworkers, Alvard Karapetyan, said that in the first half of 2013, 40 people called the organisation’s hotline, but in the same period last year, that number increased to more than 300.

Galstyan hopes the new law will provide more support to victims and lead to more convictions.

"Once the law is passed, the specific nature of domestic violence will be taken into account in the course of an investigation,” Galstyan said. “The main purpose of the law is to prevent violence and to provide protection to victims."

Ani Hovhannisyan is a journalist at Hetq Online.

Armenia
Rule of Law, Women's rights
Connect with us