Healthcare infrastructure not equipped for expectant mothers with mobility difficulties.

Healthcare infrastructure not equipped for expectant mothers with mobility difficulties. 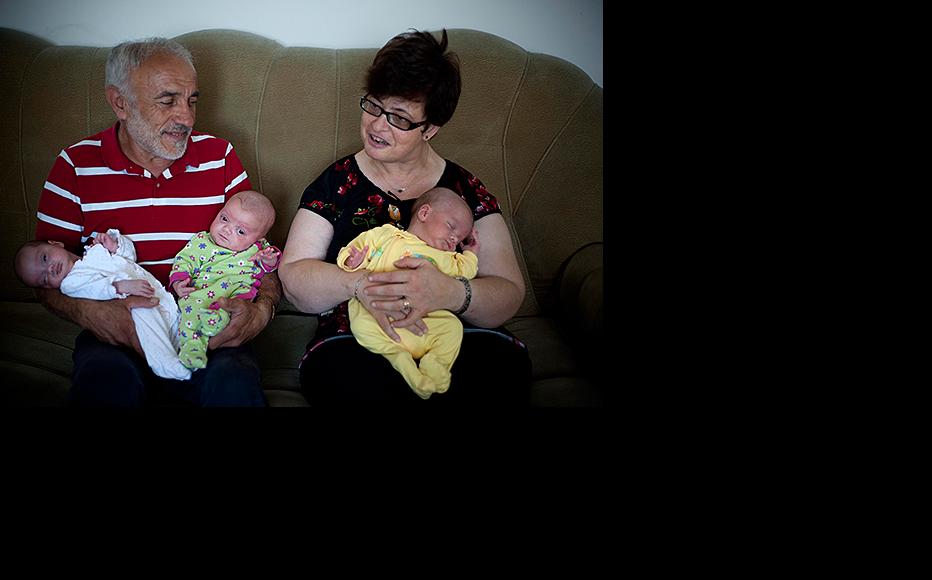 Tamar Tashchyan with her husband Levon and their triplets. (Photo: Nazik Armenakyan)
The link has been copied

Disabled women in Armenia say they are prevented from getting proper antenatal care because hospitals lack the equipment and access facilities they need. Some say the poor provision reflects enduring Soviet-era attitudes to disability.

Tamar Tashchyan, a 40-year-old Armenian immigrant from Lebanon who arrived with her husband two years ago, walks with difficulty and normally uses a wheelchair. She gave birth to triplets a month ago.

“I had a caesarean section to give birth to the children,” she said. “I was basically unable to use the birthing couch. During my pregnancy, on my regular visits for medical check-ups, it was problematic getting onto the couch. To get up the three steps and then lie on the couch, I needed help from my husband and the nurse. I just couldn’t manage it on my own.”

Zaruhi Batoyan, a disability specialist with Bridge of Hope, an NGO which works with disabled children and young people, confirmed that women with mobility, hearing or sight problems faced various obstacles during pregnancy.

“The gynaecological couches are standard ones that can’t be raised or lowered for people with restricted capacity. They can’t even lower the three steps that women have to climb to get up onto the couch,” she said.

More than 184,000 Armenians are registered as disabled, and they frequently complain about the difficulty of accessing medical facilities, which are often upstairs or otherwise hard to get to.

Christine Aghanyan, a psychologist from the Agate centre which helps women with special needs in the city of Gyumri, said that in Soviet times, disability was treated as a disease, and it was taking a long time to change public perceptions.

Nelly Nahapetyan, a gynaecologist and lecturer at Yerevan State Medical University, said there was not a single medical institution in Armenia that was completely geared up to receive and treat disabled women.

“You don’t get the amenities that women in wheelchairs require to get around easily, especially when they’re pregnant,” she said.

Batoyan said she had personal experience of trying to enter and move around a hospital in a wheelchair.

“The people who should have been there to help me weren’t around,” she said. “There were only women at reception, and they wouldn’t have been able to lift a heavy weight. The doors were narrow, and it was hard getting into the lift. Maybe the problem is that I went to the hospital on my own without anyone with me. But at the end of the day, the environment should adapt to us, not the other way round.”

Batoyan argues that the government needs a whole new programme to make buildings accessible to disabled people, in accordance with the United Nations Convention on the Rights of Persons with Disabilities, which Armenia ratified in 2010.

Nahapetyan said medical staff were as keen as anyone else for disabled women to have full access to healthcare facilities. At the moment, she said, “doctors and nurses have to cross from one medical department to another to ensure a disabled patient doesn’t face difficulties. The doctors do what they can, but all this moving about from one floor to another and from one ward to another don’t make sense and create a load of problems.”

Armenia is moving towards a new approach to disability and benefits, with a law that has been in the pipeline since 2009 but has yet to be passed. The Soviet-era method of placing people in one of three categories ranked by severity of disability will be dropped and replaced by a fairer, more nuanced classification based on ability to work. (For a report on the planned changes, see Armenia Reforms Disability Rules.)

“I welcome this new law if it’s going to bring reforms that mean that in future, facilities will become more convenient and accessible for women with disabilities,” Nahapetyan said.

Health ministry official Anna Hakobyan said that although the new law would not apply retrospectively to hospital design, “it does prescribe that in a few years’ time, there will be ramps and doors everywhere, and it will be compulsory for all buildings and roads to be modified to suit the needs of people of restricted capacity”.

She added, “It wouldn’t be right to say we’ve done everything, but we’re on the right track.”

Aghanyan, the psychologist, disagreed with this view, arguing that conventions and laws adopted by government actually made little difference on the ground.

“As for problems around maternity and reproductive health, these matters are raised only rarely, even at state level,” she added.

Tigranuhi Minasyan works for the Bridge of Hope group, and has limited mobility because of cerebral palsy. She says living in Armenia involves a constant battle against a world not designed for the disabled.

“When I was studying at the Agrarian University, I wouldn’t eat anything all day so that I wouldn’t have to go to the toilet, as I was just not capable of getting there,” she recalled. “I recently spent a few days in hospital and the room was so uncomfortable that I resolved to return to hospital only when it was time to die.”