Few survivors speak out and convictions for such abuses are rare.

Few survivors speak out and convictions for such abuses are rare. 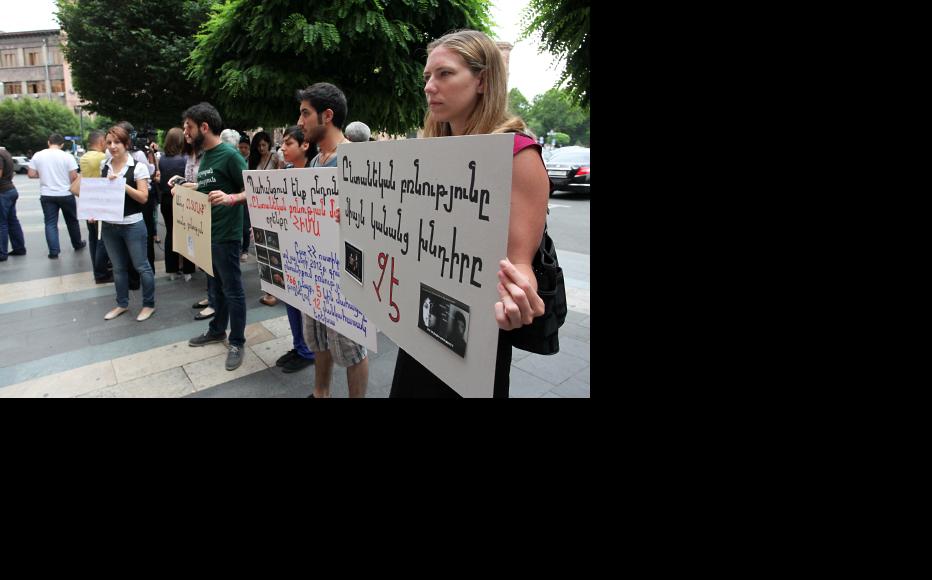 Activists demand the adoption of a new law on domestic violence. (Photo: Photolure) 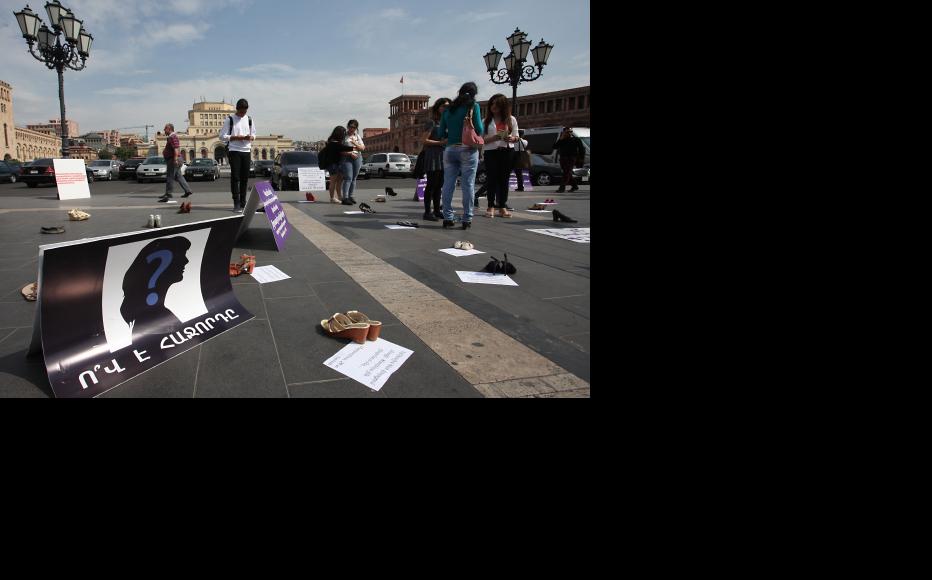 "Silence will not protect you!" reads a poster. The shoes are a reminder of victims of domestic violence. (Photo: Photolure)
The link has been copied

Rights activists in Armenia say that a recent court case has highlighted the urgent need for new legislation on crimes of domestic violence.

On January 22, 48-year-old Nagorno-Karabakh veteran Karen Khechoyan was found guilty of domestic abuse by a court in the Lori province in northern Armenia. His wife, Lusine Ghabuzyan, testified that he had abused and beaten her for more than 17 years.  The last attack left her hospitalised with multiple bruises and fractures.

However, the court ruled that Khechoyan was only liable for a fine of 150,000 drams (300 US dollars) for “inflicting intentional bodily harm to his wife´s health and beating a minor daughter”.

Campaigners have long argued that dedicated legislation is needed to ensure justice for victims of abuse.

In 2013, a draft law on violence in the family developed by NGOs with the participation of the ministry of labour and social affairs was rejected.  Officials said that the law would have been unenforceable.

NGOs working in the field of gender equality hope that a law on domestic violence may finally be in sight.

The provision is included in the EU Human Rights Budget Support Programme 2016-2018, signed between the EU and Armenia, with a budget of 11 million euros.  One of the conditions of the programme is the adoption of a standalone law on domestic violence this year.

(See also Armenia: Domestic Abuse Bill Back on the Table).

Ther lack of legislation on domestic violence was also raised by a number of countries during the United Nations´ second Universal Periodic Review of Armenia a year ago.

Arman Tatoyan, the newly-appointed ombudsman, was until recently deputy minister of justice. He told IWPR that the justice ministry was planning to start work on a domestic violence law, although he could not give any definite time span.

In January this year alone, 30 complaints of domestic abuse were registered with the police. Activists say that this figure represents only the tip of the iceberg.  Not only is the actual number of domestic violence victims believed to be much higher, but of the reported cases few ever go to court and convictions are rare.

According to police figures, 678 cases of domestic abuse were reported in 2014.  Out of these incidents, criminal investigations were opened into 76 incidents and just 12 went to trial.

Last year, there were 784 cases of domestic violence registered in 2015. Criminal action was initiated in 150 cases and 42 went to court.

Artur Vardanyan of the police´s main criminal investigation department argued that the rising numbers of criminal cases showed that the police were taking the issue seriously.

“The police already inspire trust in the public,“ he told IWPR.  “They have realised that the police are nearby and can help.”

As for the small number of prosecutions, Vardanyan disagreed, noting that if the man and the woman reconciled while an allegation of domestic abuse was being investigated, the criminal case could simply be closed.

But Nona Galstyan, a lawyer at the Women´s Support Centre, had a very different take on the issue.  According to her, the police were reluctant to initiate criminal proceedings in cases of domestic violence.

“Frequently, the police and the court impress upon the victim that it is not worth destroying the family and that it would be better to withdraw the complaint or claim, return home, accept the situation and continue to live with the violator under the same roof,” she said. “It happens that after such conversations, women change their mind, return to the family and are again subjected to severe violence.”

The low rate of prosecution was also due to difficulties in using the existing criminal code of Armenia to pursue cases of abuse, she said, stressing that this was why a dedicated law was essential.

The system needed to be able to step in before it was too late. According to the Coalition to Stop Violence against Women, 30 women have died at the hands of their partners over the past five years, leaving 45 children without their mothers.

RIGID ROLES FOR MEN AND WOMEN

According to a report published by the Centre for Regional Research in Yerevan last month, unemployment has been one of the underlying causes of domestic violence in the country.

“This has also fostered a sense of frustration and humiliation for many men, tragically manifested through increased alcoholism and gambling, and also directly related to a pattern of violence directed toward their wives,” wrote Lilit Simonyan, the report's author.

“This is also clearly seen in cases of gender-specific socialization, cultural definitions of appropriate sex roles, belief in the inherent superiority of males, values that give men proprietary rights over women and girls, notion of the family as under male control, customs of marriage, and acceptability of violence as a means to solve conflict,” Simonyan wrote.

Siranush Davtyan, a psychologist with the Women´s Resource Centre, warned against attributing social problems, alcohol or drugs to be the root causes for violence against women.

“In fact, men are guided by the understanding that women are their property and ´I will do with her as I wish´,” Davtyan said.

According to a United Nations Population Fund survey on Armenia published in 2010, 61 per cent of the women surveyed who had a partner or were once in a relationship were exposed to controlling behavior. A quarter was subjected to psychological violence or abuse and 8.9 per cent experienced physical violence.  Only 7.7 per cent of the women believed that problems such as domestic violence could be discussed with people outside the family.

The 2014 law on social assistance, which first defined the concept of domestic violence, specifically referred to the provision of an emergency refuge for people suffering domestic violence.

However, the state says that it lacks the resources to set up a network of safe houses.

Armenia´s capital Yerevan currently only has two refuges for abuse survivors.  They are run by the Women's Support Center, the Women’s Rights Center and the Armenian Lighthouse Charitable Foundation. The number of women provided with shelter is kept confidential, but there are several times more applicants than can be accommodated.

Social worker Anna Oganesyan recalled once turning to the ministry of labour and social affairs for help trying to find accommodation in a shelter for a woman subjected to violence. The ministry advised the victim to return home to her husband on the grounds that there was no free space available.

According to Zaruhi Hovhannisyan, coordinator of the Coalition against Violence Against Women, the expense of adopting new legislation was one of the factors slowing the state down.

“After the adoption of the law, there is a need to retrain many professionals working in the different departments of government, setting up shelters and so on,” she said, “Also, there is a need to change the approach to the work by the police and the courts.”

Nune Ovsepyan is an independent journalist in Armenia.

Armenia
Women
Connect with us