At rare meeting, two presidents agree that current escalation is a bad thing, but will they do anything to stop it?

At rare meeting, two presidents agree that current escalation is a bad thing, but will they do anything to stop it? 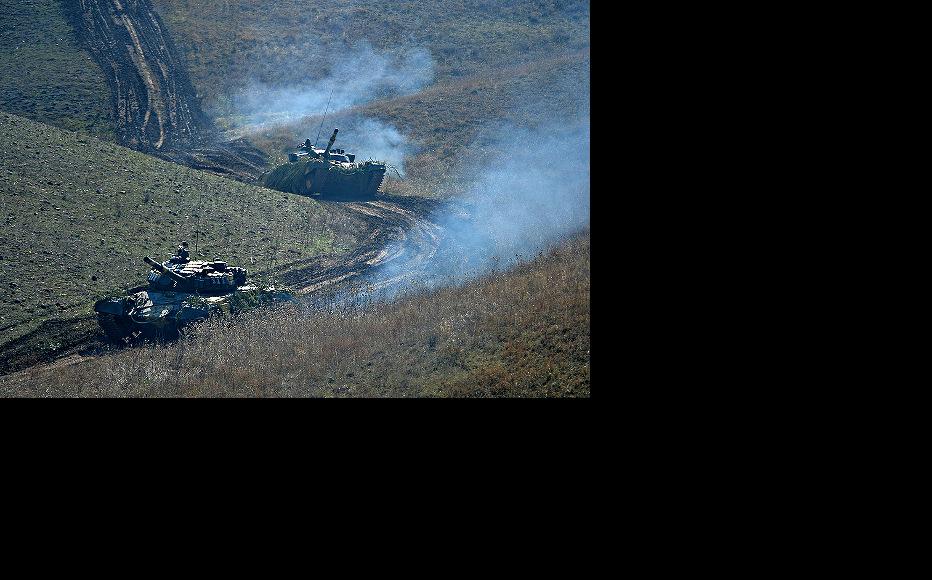 Armenian tanks on manoeuvre in Karabakh. December 2015. (Photo: Armenian president's website)
The link has been copied

The presidents of Armenia and Azerbaijan had a rare meeting last weekend amid escalating tensions around Nagorny Karabakh.

The meeting between Armenia’s Serzh Sargsyan and Ilham Aliyev of Azerbaijan took place in the Swiss capital Bern on December 19, under the auspices of the Minsk Group, the tripartite body set up by the Organisation for Security and Cooperation in Europe to support peace talks on Karabakh.

“The summit created an opportunity for the presidents to clarify their respective positions,” a statement from the Minsk Group said afterwards. While the meeting did not generate any concrete results, the fact that the two leaders were talking was seen as positive. The last time Sargsyan and Aliyev met to discuss the conflict was in Paris in October 2014. (See Reset in Azerbaijan-Armenia Talks Process?)

According to the statement, Aliyev and Sargsyan both said they were ready to continue talks on a final resolution of the Karabakh dispute, both said they remained committed to a peaceful settlement, and both reaffirmed their support for the Minsk Group as the lead mediating body. That last was a significant statement, since support for the Minsk Group has wavered in recent times as local officials accuse the OSCE body – co-chaired by United States, Russian and French diplomats – either of favouring the other side,or of failing to achieve progress.

War in the early 1990s left a local Armenian administration in control of Nagorny Karabakh and several adjoining districts of Azerbaiijan. The ceasefire signed in 1994 has prevented a resumption of large-scale hostilities, but is frequently breached by bouts of shooting across the “line of control” surrounding the Karabakh zone and across the Azerbaijani-Armenian state border.

More intense periods of fighting always raise concerns of a return to full-scale conflict. There were serious upsurges in fighting in July- August 2014, again in January 2015, and most recently since October this year. (See Armenia-Azerbaijan: More Skirmishing, Bigger Guns.)

Just before Sargsyan and Aliyev met, there were reports of more deaths. On the night of December 17-18, the Karabakh defence forces reported that three of their soldiers and two Azerbaijanis were killed in an enemy reconnaissance raid. Azerbaijan later denied this was true.

The OSCE statement said that Aliyev and Sargsyan discussed the recent violence on the ground, and that they “expressed particular concern about casualties, including civilians, caused by the use of heavy weapons“.

Reports that heavier weapons are being deployed emerged this autumn. First the Armenians accused the Azerbaijanis of using large-calibre mortars, rockets and conventional artillery, then they announced they were responding in kind.

On December 9, the Karabakh defence ministry said Armenian troops had been fired on by an Azerbaijani tank, in the first use of heavy armoured fighting vehicles since 1994. In Yerevan, Defence Minister Seyran Ohanyan urged the OSCE Minsk Group to take Azerbaijan to task over the incident.

Azerbaijani officials did not deny outright that one of their tanks was in action. Commenting on the claims on December 10, defence ministry spokesman Vagif Dargahli said merely that the army used “various weapons against the enemy depending on the situation", according to the Azernews agency.

Both Armenian and Azerbaijani forces obtain most of their weapons from Russia. Armenia is a long-term, trusted ally of Moscow in a region in which neither state has many other friends. (See our latest story on Armenia and the Russian-Turkish crisis.) But Azerbaijan has the oil revenues to buy all the advanced weaponry it wants, and Russia seems happy to sell it.

A report by the Stockholm International Peace Research Institute (SIPRI) published in March aid Azerbaijan increased its arms imports by 249 per cent between the periods 2005-09 and 2010-14, making it the second-largest arms importer in Europe. It acquired 85 per cent of these weapons from Russia.

Armenia’s imports over the same period were just four per cent of those of Azerbaijan, said SIPRI.

Commentators in Armenia and Azerbaijan agree that the latest escalation in fighting comes from calculated political thinking rather than trigger-happy troops, but they differ sharply on who is seeking to make trouble.

Sergei Minasyan, deputy director of the Caucasus Institute in Yerevan, argues that Azerbaijan wanted to ramp up the pressure on OSCE mediators and the Armenians ahead of the December 19 presidential meeting. But the desire to project military strength also reflected domestic pressures on Azerbaijan’s government, he said.

“There are other factors, such as the reduction in government revenues in Azerbaijan due to the sharp drop in oil prices,” said Minasyan. “We can see what’s happening in Azerbaijan – the state security ministry has practically been dissolved, there’s the unrest in Nardaran and the aggravated situation on the border. The Aliyev administration is trying to distract people´s attention.”

In Baku. Mubariz Ahmedoglu, head of the Centre for Political Innovation and Technology in Baku, said it was Armenia that was driving conflict.

Ahmedoglu noted that there was a view that since the Armenians had gained de facto control of all the territory they wanted, they had no need to upset the status quo by engaging in aggressive military action. But he said it would be misguided to accept this as a truth.

“In reality, it’s the wrong approach,” he told a press conference reported by the Trend news agency. Armenia realises that everything it’s done hasn’t been legally formalised. Armenia’s current aim is to get some kind of legal document signed, any kind, even if there’s little substance to it…. The main aim of Armenia’s strategy is to keep the ‘line of contact’ constantly on the agenda as a source of danger. And the best way to do that is to breach the ceasefire frequently, because news of that quickly goes out via the media and reaches influential figures on the international scene.”

On December 9, US State Department spokeperson John Kirby called for an end to the latest round of violence. “We also remind the sides that these attacks do not conform to the commitment by the presidents of Armenia and Azerbaijan to resolve the Nagorny Karabakh conflict peacefully,” he said.

Asked whether tensions between Turkey and Russia might have contributed to the Armenia-Azerbaijan situation, Kirby said, “We´re concerned about the escalation itself and not necessarily the source. Obviously, in both cases we want to see tensions de-escalated and for cool heads to prevail.”