Armenia: Anyone Want a Factory?

Yerevan rubber factory may be moribund but its staff are still hoping it will bounce back.

Armenia: Anyone Want a Factory?

Yerevan rubber factory may be moribund but its staff are still hoping it will bounce back. 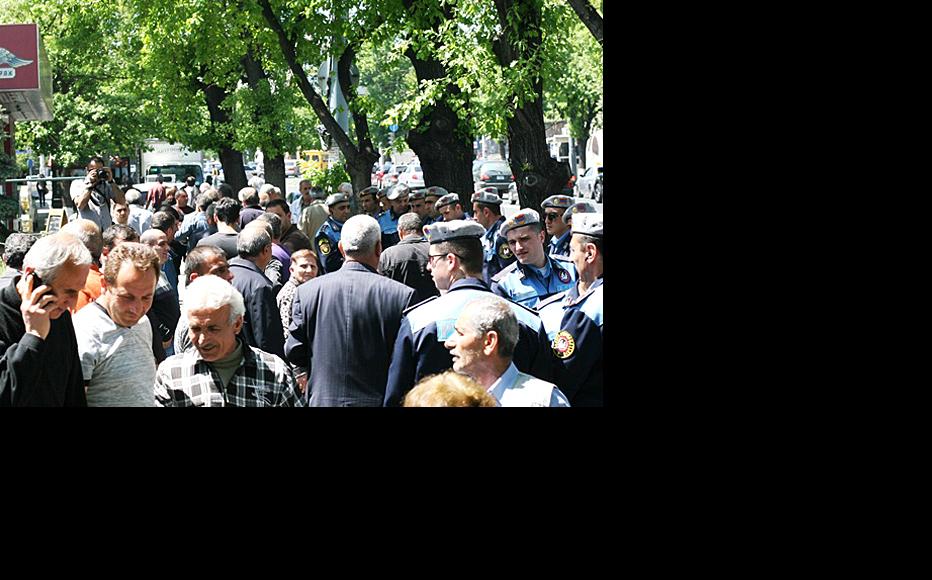 Workers from the Nairit plant demand their wages, April 29. (Photo: www.emedia.am.)
The link has been copied

At a major industrial plant in Armenia that shut down three years ago, the employees are still holding out hope that an investor will come in and revive production.

Staff at the Nairit rubber factory, located in the capital Yerevan, remain on the payroll even though nothing is being made there.

“This is the third year since production halted at Nairit, and 70 per cent of the staff sit at home on two-thirds pay,” said Serzhik Bezhanyan, a long-serving foreman. “The other 30 per cent come into work to keep the factory in decent shape and make sure that nothing gets stolen and that it doesn’t fall into disrepair…. They receive full pay, although they get it late.”

On April 29, workers held a demonstration outside the Armenian government, demanding payment of back wages for the last ten months.

Berzhanyan was less than optimistic that wages would now start being paid on time. After a similar demonstration in November 2012 last year, officials pledged not only to pay 11 months in wage arrears but also to restart production. Berzhanyan said there had been several previous protests followed by similar promises.

“Every time, after each protest, we get paid our wages for one or two months, and then the debts mount up again,” he said. “If it’s possible to pay out the money, why don’t they do so beforehand? If they need to borrow money to do it, why don’t they take out a bigger loan? We don’t understand what’s going on.”

Launched in 1940, Nairit played a key role in the Soviet economy as the only manufacturer of synthetic rubber. It also branched out into a range of other chemical products.

The Armenian government says it would take 512 million US dollars to get Nairit back on its feet – 146 million to pay off past debts, and 366 million for a modernisation programme.

In 2006, Nairit was acquired by a consortium including Polish, United States and Russian companies, with the Armenian state retaining a ten per cent stake. But the factory’s debts continued mounting until they exceeded the value of the shares, so control reverted to the bank which had underwritten the investment.

A big explosion at the factory in 2009 was a further setback for production.

In 2011, a tender to manage Nairit company was won by a German firm, but it subsequently disappeared.

On April 15 this year, Energy and Natural Resources Minister Armen Movsisyan said three companies had already submitted business plans. He would not name them, but said a major Russian oil firm, Rosneft, was now putting out feelers.

“Rosneft has not made any investment proposals; it’s only coming to that now,” he told the online news service www.1in.am. “Rosneft is one of the world’s largest companies, and if it has expressed an [interest], that has to be a major coup for Armenia.”

The Moscow newspaper Izvestia reports that Russia has agreed to offer a loan of 400 million US dollars for Nairit.

Even with possible investors on the horizon, there are question marks over whether Nairit can compete in a modern global economy, and what it would cost to get it into shape.

According to Tatul Manaseryan, an economist and head of the Alternativa think-tank, “With every year, the factory’s products become less attractive and important to the world market. We used to occupy a leading position, but now our rubber and other products are less competitive… than Chinese companies make.”

Manaseryan said that if the plant was salvageable, the right kind of investor would need to be found to take it on.

“There may be giant companies or international corporations for which the risk is acceptable, and which can afford to invest without tangible, immediate results or quick profits,” he said.

Bezhanyan said he had heard promises of imminent deals before.

“Every time, they tell us that talks are going on and that in time, the factory will operate properly again,” he said. “Some British people and Russians have been here to look at the factory, and there’s hope production will be revived, though we don’t know when.”

Although the Nairit factory has retained staff, Manaseryan warns that key technical expertise has been lost as Armenians leave the country in large numbers.

“We have to take into account that many of the engineers and technicians have already left Armenia. This exodus is not a new problem, but to retain the remaining workers and train up good people, we need to launch targeted programmes and reassure the remaining workers that they will keep their jobs,” he said.

Arpi Beglaryan is a reporter for the emedia.am website in Armenia.