Pashinyan appeals to Putin for support in resolving dispute with Gazprom.

Pashinyan appeals to Putin for support in resolving dispute with Gazprom. 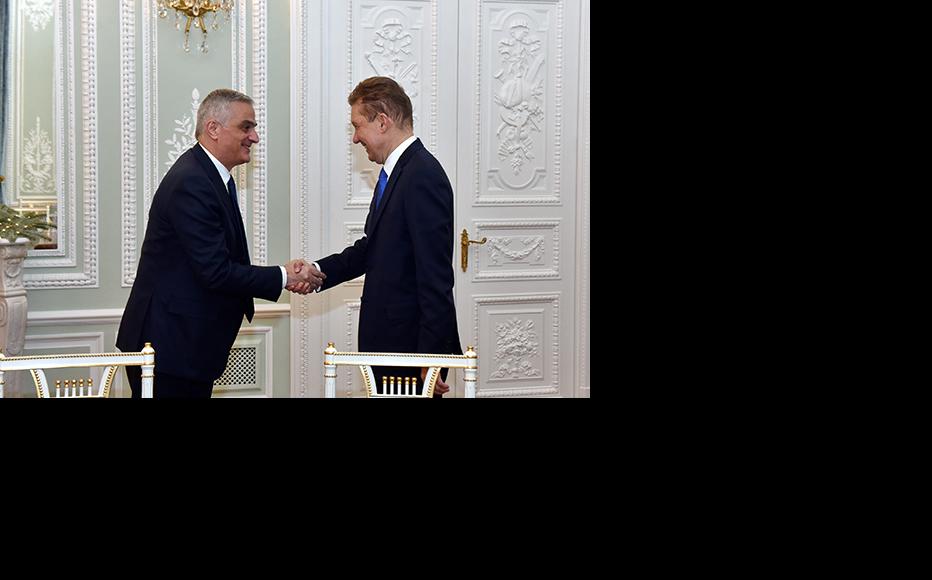 Armenian Deputy Prime Minister Mher Grigoryan meets with Alexey Miller, Gazprom's Chairman of the Management Committee and Deputy Chairman of the Board of Directors. (Photo: Gazprom)
The link has been copied

Analysts fear that the usually close relations between Russia and Armenia might be affected by falling gas prices due to the coronavirus pandemic.

Armenia relies on Russian for its gas supplies.  Gazprom Armenia, a subsidiary of the Russian Gazprom, holds a monopoly on supplies, which annually amount to two billion cubic metres of gas.

With oil and gas prices falling globally, Yerevan has asked Moscow to also lower the cost of its gas. However, at the same time, Gazprom Armenia wants gas tariffs for Armenian consumers increased.

As Armenia does not have its own reserves, its economy is highly dependent on energy prices.  High gas tariffs in Armenia will weaken its economic competitiveness and lead to price rises that will place a heavy burden on socially disadvantaged sectors already suffering from the crisis caused by the pandemic.

Armenia’s deputy prime minister Mher Grigoryan, the prime negotiator with Russia on gas issues, said that this difference in price was due to a particular bilateral agreement.

“We have a fixed price of 165 dollars per thousand cubic metres at the border, which is the result of a political agreement between Yerevan and Moscow,” he said. “Russia sells gas to Europe according to market principles, that is, the market determines the price, which is now declining.”

Yerevan sees the issue as a critical one, since the share of gas consumption in the Armenian economy and energy sector is relatively high.

“About 35 per cent of electricity in Armenia is generated in thermal power plants that operate on natural gas,” said Hakob Vardanyan, deputy minister of territorial administration and infrastructure.

The issue has also been raised within the Moscow-led Eurasian Economic Union (EAEU). Armenia and Belarus both voiced discontent regarding what they described as the high cost of Russian gas, while another EAEU member, Kyrgyzstan, also asked Russia to lower its prices. All three countries depend on Russian energy carriers.

While Yerevan has previously been fairly restrained over Gazprom’s plans to increase gas prices, the Armenian authorities have now themselves initiated talks on price reduction with the Russian gas giant.

Grigoryan addressed the management of Gazprom on March 31, while the issue was also discussed between Russian president Vladimir Putin and Armenian prime minister Nikol Pashinyan on April 6.

Pashinyan said that Gazprom’s intention to increase gas prices for local consumers was unacceptable, especially during a pandemic, and expressed hope that Putin would support him in resolving the gas dispute.

As well as cheaper gas prices, Armenia wants to alter the terms of its agreement with Russia and shift from a fixed price to market pricing mechanisms. Yerevan would also prefer to pay in national currency rather than US dollars, which has been the practice so far.

Gazprom has not yet responded to these requests, but Russian energy expert Igor Yushkov believes that Moscow may be amenable if the pricing formula is changed.

“Gazprom may agree to a price reduction if Yerevan and Moscow switch from a fixed price to market price mechanism, the way it works with Europe,” he said. “The chances of lowering the price will be higher if Belarus, Armenia and Kyrgyzstan act united within the framework of the EAEU. All three countries are now unhappy with the high prices of Russian gas.”

Yushkov added that in this case, Armenia must be ready for floating market prices.

“They are now at a low level, but in the future, with the stabilization of the situation in the global economy, prices may rise,” he concluded.

Energy analyst Ara Marjanian said that in light of current foreign policy on energy issues, Armenia will be unlikely to diminish its energy dependence on Russia in the foreseeable future. Russian energy dependency could only be reduced if Armenia worked closely with its gas-rich neighbour Iran, he continued.

Currently, Armenia cooperates with Iran under a barter scheme, with gas exchanged for electricity – one cubic metre of gas per three kWh of electricity. The scale, however, is insignificant at only 400 million cubic metres of gas annually.

“All these years there was no serious work carried out with Iran in terms of increasing gas supplies,” Marjanian said. “Iran is a lost opportunity in this regard. If we want to reduce energy dependence on Russia, we need to work further in this direction. Otherwise, every year or every two years, we might face the same problems with increasing prices of Russian gas.”

He stressed that Armenia could not currently count on alternative energy sources.

“Gas has strongly penetrated various areas of our lives,” Marjanian continued. “More than 80 per cent of our vehicles run on gas; there is nothing to replace it with. We have no other sustainable sources of energy. Therefore, we need to seek alternative sources of gas, and not an alternative to gas.”

Coronavirus Pandemic, Giving Voice, Driving Change - from the Borderland to the Steppes
Armenia, Belarus
Oil, Coronavirus, Economy
Connect with us