Another Blow to Fragile Stability in Tajik East

In Badakhshan, many believe local strongman was killed by special forces, though government denies involvement.

Another Blow to Fragile Stability in Tajik East

In Badakhshan, many believe local strongman was killed by special forces, though government denies involvement. 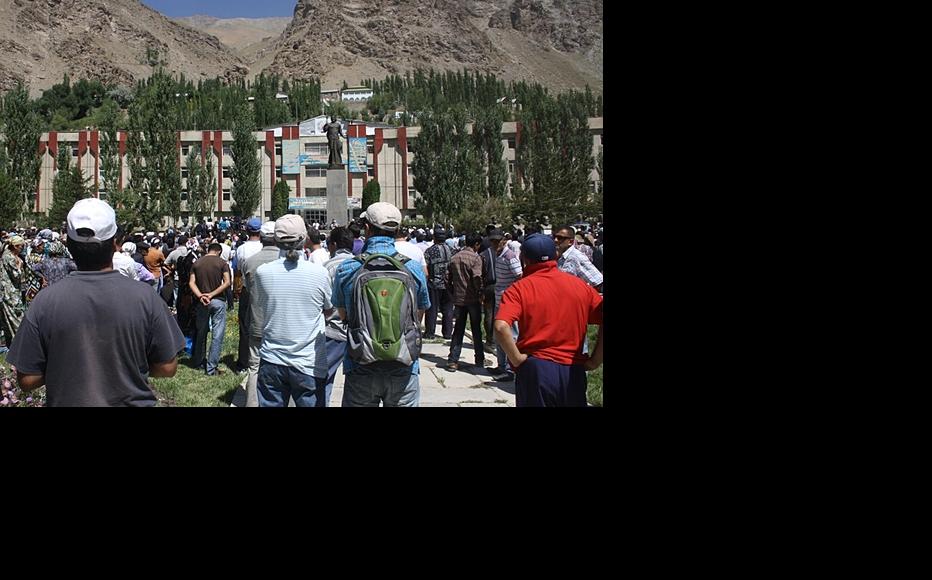 Thousands of protesters gathered in Khorog on August 22 after the killing of a well-known local figure. (Photo: IWPR)
The link has been copied

Many demonstrators stayed outside the local government offices overnight, after more than 3,000 gathered the previous day demanding that officials account for the death of Imomnazar Imomnazarov in an attack on his home earlier on August 22.

Neighbours told local media that they heard the sound of a grenade blast followed by automatic gunfire. Imomnazarov’s brother and members of his entourage were reported to have been wounded in the attack and taken to hospital.

Khorog has been tense since July, when it was left badly scarred by gun battles between government troops and supporters of a rebellious local frontier guards officer, Talib Ayombekov. When Ayombekov refused to surrender suspects in the killing of a top regional security official, central government ordered thousands of soldiers into the region to capture him and his men.

The ensuing fighting left 48 people dead. Ayombekov’s group was not defeated outright despited being massively outnumbered by government troops, and instead a ceasefire was reached in late July and a process of negotiations started. (See Tajik Rebels Lay Down Arms in Badakhshan.)

Imomnazarov’s role in all this is unclear. Like Ayombekov, he was part of the anti-government guerrilla force during the 1992-97 civil war, before returning to civilian life. As violence broke out this July, the authorities named Imomnazarov as well as Ayombekov and others as leading figures in organised crime in Badakhshan, involved in smuggling narcotics and other items across the nearby Afghan border.

The attack on Imomazarov raised suspicions amongst locals who believed government special forces were responsible, although officials have denied this.

An unnamed security source told the Russian news agency Interfax that it was not in the Tajik authorities’ interest to kill Imomnazarov, as they were trying to restore peace and stability in Badakhshan. Ikrom Umarov, an interior ministry official, dismissed the allegations as entirely unfounded in an interview with RFE/RL radio’s Tajik service.

The attack also caused outrage as Imomnazarov had earlier sustained serious injuries and had difficulty walking, suggesting he did not pose a serious threat at that point. The authorities say Imomnazarov’s sustained these injuries during separate turf wars between local criminals, rather than in the fighting with government forces.

The interior ministry has launched an investigation into his death.

Imomnazarov’s killing is a setback to efforts to restore peace to this isolated region, whose population differs from the rest of the country in language, culture and faith – people here are Ismaili Muslims, not Sunnis like most Tajiks.

The ceasefire and subsequent talks were arranged by a mediating team consisting of local officials, residents and Ismaili figures including local clerics and representatives of the Aga Khan Foundation, which has worked to develop the region over the past two decades. The Aga Khan himself, who wields considerable influence as the spiritual leader of Ismailis worldwide, played a key role in persuading the rebels to accept the truce and urging the wider community to support peace efforts.

The community had responded to this, posting volunteers to help maintain security. Most importantly, Ayombekov and another local strongman Mamadbokir Mamadbokirov, surrendered and began cooperating with the police.

A high-ranking official who recently returned to the capital Dushanbe after visiting Khorog said it had been difficult to agree the ceasefire because local residents were so angry with the government. The negotiations would be even harder following Imomnazarov’s death, he said.

“It took a great deal for us to get them on our side. It’s hard to predict what will happen next,” he said, speaking on condition of anonymity.

Since Imomnazarov’s death, there have been reports of local residents putting back some of the road blocks removed when the July fighting died down.

Negotiations have also resulted in a disarmament process in which over 500 weapons have been turned over to the authorities.

A supporter of Imomnazarov, speaking on condition of anonymity, told IWPR he believed this might have been premature, noting, “The guys have surrendered almost all their weapons, and we’re left with no firearms."

One local resident who gave his name as Alimardon told IWPR how the latest demonstration unfolded. On hearing news of Imomnazarov’s death, crowds gathered in Khorog on August 22 to demand that authorities end the use of force and withdraw troops from Badakhshan.

When no one came out to speak to the protesters, they attempted to enter the local government building but were halted by warning shots from police guards. Two people were shot in the legs, local media reported.

The crowd swelled as residents of nearby villages arrived to attend the Imomnazarov’s funeral, which took place later the same day.

Provincial governor Qodir Qosim and Interior Minister Sherali Khairullaev subsequently met with protesters, and agreed to withdraw troops deployed in and around Khorog and ultimately to shift them out of the region altogether.

The withdrawal seems to have been set in motion, with 200 troops reported to have moved out, while the number of police checkpoints erected during the fighting has been reduced.

In Khorog, residents are worried that things could take another turn for the worse. A 55-year-old woman from the town said Imomnazarov had many allies in neighbouring Afghanistan who might wish to avenge his death.

“God forbid we get people shooting from the Afghan side of the border,” she said.