All Change at Libya's London Embassy

All Change at Libya's London Embassy 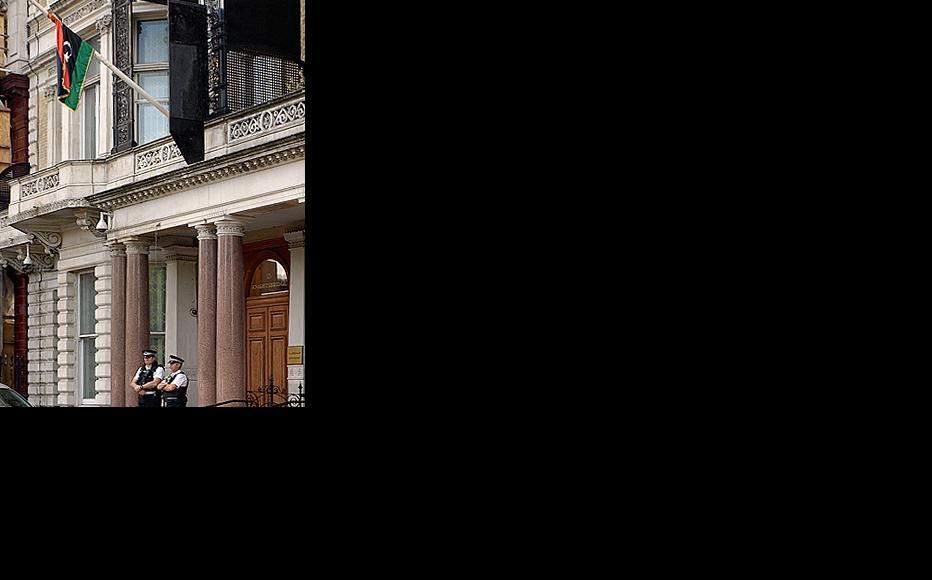 The Libyan embassy in London’s Knightsbridge area has had an unsettling history.

Its predecessor, the Libyan People’s Bureau in nearby St James Square, made global headlines in 1984 when an unidentified staffer opened fire on protestors outside and killed policewoman Yvonne Fletcher.

When the mission relocated to its current premises, its high-ceilinged rooms continued to be staffed by intelligence officials often close to Muammar Gaddafi’s family and tribe, and tasked with protecting the dictator’s UK interests as he and his sons snapped up prime London real estate.

Then, as the regime crumbled in August 2011, diplomats tried unsuccessfully to channel money out of embassy bank accounts, and to sell off the four-storey yellow brick building along with its fleet of cars before Britain expelled them.

A newly-arrived deputy head of mission, Ahmed Gebreel, has now taken their place. Along with the ambassador, he is waiting to be joined by a five-member diplomatic team from Tripoli.

Gebreel, a softly-spoken foreign policy expert experienced in talking to the media, does not represent a complete break with the past. A career diplomat, he was previously posted at the United Nations in New York, where he represented the Gaddafi government as second secretary before defecting from the regime.

Gebreel says those posted to the UN were career diplomats rather than Gaddafi spies. Unlike their London counterparts, they defected in February 2011, just after the revolution began.

When Gaddafi ruled, criticism of his administration could mean death. Since his fall, Gebreel said, the culture within Libya's diplomatic corps has changed significantly, and the climate of fear has evaporated.

Bright, contemporary Arab paintings adorn the walls of the embassy, which has a host of administrative staff and a cheerfully informal atmosphere. In the spacious, wood-panelled lobby, visitors watch Libyan television beneath an ornate Victorian ceiling.

“When I was working for the regime, you felt that everyone’s concern was not to upset Gaddafi, to follow the rules of Gaddafi... but now, after the revolution, you are working for the country, the people,” Gebreel said as he drank green tea.

In the months that followed his defection, Gebreel served as political adviser to National Transitional Council, NTC, chairman Mustafa Abdel Jalil, and as a foreign affairs spokesman, before being posted to his large office overlooking Hyde Park and a short distance from the Royal Albert Hall.

Since Gaddafi’s overthrow, he said, relations between London and Tripoli have never been better, and his current diplomatic role is “a noble cause”.
.
In Britain, one of the tasks set for the embassy is to locate Gaddafi family assets. No one knows how much these are worth, but they may be held under false names and could include billions of pounds.

Inside Libya, those who help locate assets stolen by regime members are being offered a ten per cent cut. While there have been discussions on whether to offer the same incentive for assets recovered in the UK, no decision has been made.

Britain, meanwhile, has been pushing the embassy and the NTC to take action on PC Fletcher’s killing and on the Lockerbie bombing, which killed 270 people shortly before Christmas 1988.

Gebreel said the NTC was currently going through a difficult phase, as it prepared for an election for an assembly to draft a new constitution, and reorganised government ministries that used to be largely run according to Gaddafi’s personal whim.

“We will be open to discuss these issues [PC Fletcher and Lockerbie] in the future after we pass this difficult period,” Gebreel said, adding that the NTC takes both cases very seriously.

“They are not minor issues,” he added. “My personal feeling, [with] the Yvonne Fletcher issue, it’s time to find out who committed that crime,” and to hold them accountable.

On Lockerbie, he said the Libyan people had been secondary victims to the atrocity because they lived under sanctions for a crime for which they were not responsible.

“If Gaddafi was the one who committed that crime, then he did not suffer. The Libyan people were the ones who paid,” he said. “I personally wish Gaddafi was caught alive and was questioned about all the crimes and all the secrets he had.”

In Libya, some have argued that Gaddafi-era officials should be prevented from serving in the new government and its structures. Recently, one NTC official told IWPR on condition of anonymity that he thought all members of the old regime should be asked to resign. A new law at the drafting stage would prevent former officials from running in the election for the constitutional assembly.

Gebreel said his own appointment was perfectly legitimate. Other officials with questionable pasts had been recalled to Tripoli and could face prosecution. He added that Libya was full of pragmatic people who worked under Gaddafi but did not compromise themselves and still had plenty to offer.

As for himself, he said, “I joined the revolution from day one.”

Interview conducted by William Shaw, an IWPR editor in London.

The Arab Spring
Libya
Reconciliation
Connect with us