Medics fight rumours that programme is a Western plot against Muslims.

Medics fight rumours that programme is a Western plot against Muslims. 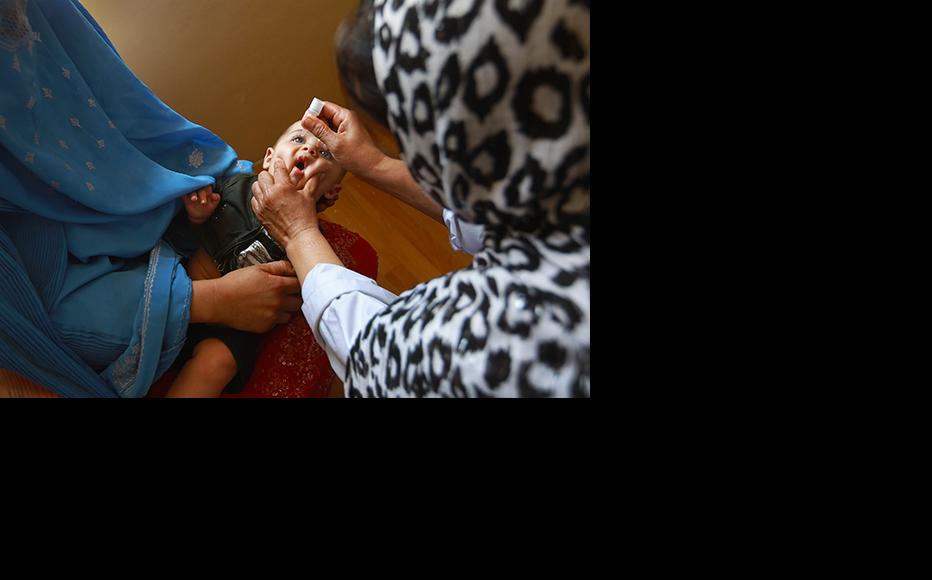 An Afghan child receives a polio vaccine at a clinic in Farza. (Photo: John Moore/Getty Images)
The link has been copied

Syed Kamal Shah, a UNICEF spokesman in Afghanistan, said, “Negative propaganda like this is being spread by local residents.The stories we hear are astonishing. We’ve come across instances where it’s been claimed the vaccine is illegal or that it causes disease and infertility.

“We’ve even heard people suggest the vaccine is actually animal urine and that the programmes are some form of organised conspiracy against Muslims. I don’t know why this is.”

Poliomyelitis, also known as infantile paralysis, is a crippling and potentially deadly infectious disease caused by the poliovirus. It is spread through contact with infected faecal matter or through sneezing or coughing.

Once an individual is infected, the virus can spread to the spinal cord causing paralysis. Although there is no specific treatment for the disease, it is preventable with multiple doses of the polio vaccine.

In Afghanistan, UNICEF annually currently vaccinates some 5.5 million children under five, including 1.7 million from the country’s southern provinces.

Last year, 12 cases of the disease were registered in the country; five were recorded in Kandahar, three in Nangarhar, two in Helmand, and one each in Zabul and Kunduz.

Although the boy had been vaccinated twice earlier in childhood, his family had stopped the injections because they had heard from mullahs that the programme was harmful.

Salam said, “To begin with my nephew started complaining about stiffness of his hands and legs, and then he was unable to move at all.

“We didn’t know what the problem was but when we took him to see health workers they told us it was due to polio.

“There are still many families in Helmand who don’t vaccinate their children against polio. Many are suspicious; they believe the vaccination is actually animal urine which can cause infertility and disease.

“Now we understand the value of having a polio vaccine and we’ll make sure every child in our family will be vaccinated in the future.”

“My brother was misled by the rumours and lies of mullahs and others. Because of this, he hid his daughter when health workers arrived to carry out vaccinations and now his daughter has been infected,” Mohammad continued.

“We’re so sad about my niece and my brother is also devastated. He hadn’t realised that polio is incurable. Lies and falsehoods about vaccination programmes are still being spread in Afghanistan meaning children don’t get the injections they need.

“We ourselves didn’t take the issue seriously enough. We only understood when it was too late. We can’t do anything now – my niece is paralysed.”

Shah, from UNICEF, also noted that some families chose to hide their children from health workers out of a misconceived fear of the vaccine.

He said in some cases parents would insist their children were not at home, were sleeping or that they were too ill to be given further injections.

He added, “There are a few people in the region who still spread malicious stories about the polio vaccine.

“When this happens - when people are given the wrong information – it’s perhaps understandable that they reject it.”

Shah said that UNICEF was working to educate those in more remote districts about the threat polio posed.

He said that they hung banners in villages, held meetings with local elders and placed adverts in newspapers to get across the importance of vaccinations.

He also explained that ongoing violence in Helmand had at times made carrying out the vaccination programmes more difficult.

Fareed Ahmad Farhang, director of Helmand’s department of information and culture, acknowledged that public awareness of the dangers posed by polio was poor.

“We have held frequent meetings with Helmand’s regional media and have asked them to educate their readers about the importance of polio vaccinations,” he said.

Medical professionals working in the field of vaccination say they even face abuse from people in the community.

Health worker Khatima said, “Sometimes when we visit homes families actually shut the door in our face and tell us that they don’t have children.

“Some of them argue the vaccine is a conspiracy against Muslims; that it’s aimed at lowering population numbers and intended to spread disease.

“Some women even tell us that their children become more naughty after being vaccinated against polio.”

Azizi, another polio vaccinator, added, “We’re often abused and shouted at by families. They claim we’re trying to destroy their children’s lives or give them illegal drugs.

“It isn’t such a problem in the cities now – it’s more of an issue in the districts but we try very hard to talk to family elders.

“Often they can be persuaded to let us vaccinate the children once we’ve had a chance to speak to them.”

Polio vaccinator Ahmad Wali described one of these instances of success. He recalled how he had met four brothers in Lashkar Gah who had 25 children between them.

He said each of the brothers had refused to let their children be helped, insisting that the injections contained the urine of foreigners.

He added, “Finally, with the help of a prominent religous practitioner ar, we convinced the family elders that the vaccinations were safe and they agreed to let us go ahead.”