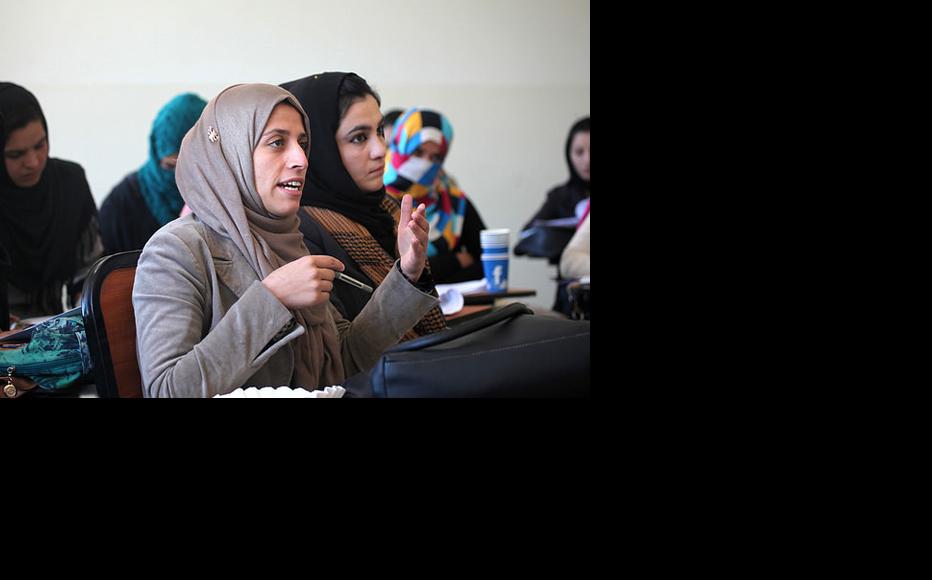 University students in discussion. (Photo: UNAMA News/Flickr)
The link has been copied

Asma, 20, is in the second year of her law degree at a private university in Jalalabad, the provincial capital of Nangarhar province.

Although she is an excellent student and consistently comes top of her class, she told IWPR that she was forced to spend most lessons sitting in silence.

“No one gets higher marks in my class than me but I can’t speak to lecturers very much, because when I do all the male students turn their heads and start ogling me,” she said.

Female students in Nangarhar say that they face constant sexual harassment at university and warn that faculty management are failing to address their concerns.

Complaints include inappropriate sexual advances by male classmates and lecturers alike, as well as a reluctance among staff to treat female students as equals.

In Afghanistan, conservative attitudes mean that there is widespread prejudice against young women studying or working outside the home.

“The biggest initial hurdle for female students is to convince our parents to let us go and get a higher education,” Asma said. “But that’s only the first obstacle - after that we face discrimination and prejudice almost daily.

“We’re regarded as meaningless girls - women who are only there to satisfy the sexual desires of men. Just walking to university can be very scary for us because there are boys standing around on the way staring at us,” she continued.

“Some of these boys shout at us and use foul language. Even when we get to university we even don’t necessarily feel safe because some male students consider us prostitutes and try to have affairs with us just because we’re not at home.”

Officials in Nangarhar acknowledge that there are problems, but insist that they are working to address them.

Ameer Mohammad Kamawal, the director of private universities at the ministry of higher education, said that improving conditions for women remained his department’s top priority.

Any student or lecturer found guilty of harassing women would be expelled or sacked, he said, adding that disciplinary committees had been established within universities to monitor and deal with student complaints.

He said, “We’ve circulated a letter among all universities regarding the issue of sexual harassment and have asked them to take all complaints seriously.”

However, he also stressed that disciplinary measures were in place to combat the problem, adding that a student had recently been expelled as a result of a complaint.

“In the most severe cases we can expel students for sexual harassment while in cases deemed less severe we can bar them from the university for a month,” Shinwari said.

Activists say that social attitudes have been slow to change, both off and on campus.

Muqadasa Ahmadzai is head of Kor Tolana, a civil society group in Nangarhar which campaigns for women’s rights.

She told IWPR that although her organisation had dealt with numerous incidents of sexual harassment of female students, many more cases were likely to be kept secret owing to the issue’s sensitivity.

“We have launched massive campaigns on social media addressing this problem as well as holding meetings with administration directors and female students,” she said.

“We’ve even seen cases where a female student threatened and harassed by her teacher has been instructed to marry him in order to save her family from their perceived dishonour and embarrassment.”

Hashima Sharif, a spokeswoman for the eastern branch of Afghanistan’s Independent Human Rights Commission (AIHRC), said that action was needed to keep women safe both on campus and as they travelled to and from their studies.

“We carried out a survey looking at the problems encountered by girls at university which found this was a big issue,” he said. “It’s a problem not only within the institutions themselves but also on the street as students made their way to class.”

Nilofar Aziz, a member of Nangarhar’s provincial council, said she had followed up on a number of complaints female students had made about their treatment at university.

She continued, “I’ve had meetings with directors of different institutions and discussed these problems with them. Officials promised me they’d take sexual harassment allegations seriously.”

The danger is that, having defied social prejudice to access higher education, young women facing harassment will come under pressure to withdraw from their studies.

Mohammad Wali said that he was now reconsidering his decision to help his daughter pursue her dream of becoming a dentist.

To keep her safe from harassment Wali took her to and from her classes each day, but added that he was not sure how long he could continue to defy public opinion.

“I have to accept some of the unkind remarks villagers and my relatives make for my wanting to educate my daughter,” he said.

“Every morning I take her to class and every afternoon I return her home. But if the attitudes here don’t change I may stop her going.”

That was the fate of another young woman, Sirika, who said that she had felt she had no choice but to abandon higher education after a tutor began stalking her.

“One of my university lecturers managed to get my mobile number and started calling me regularly,” she said.

“He began making immoral, sexual advances to the point where I felt I had no choice but to leave the university to protect the honour and respect of my family.”

Asad Khan, a university student, agreed that unless students and teachers alike did not combat this behaviour then families would simply stop allowing young women to study.

“I hear about this all the time,” he said. “It seems all Afghans - especially male university students – are suffering from some kind of sexual deprivation.”

Afghanistan
Education, Women
Connect with us