Prejudice and scarce resources mean that few have the opportunity to play, let alone compete.

Prejudice and scarce resources mean that few have the opportunity to play, let alone compete. 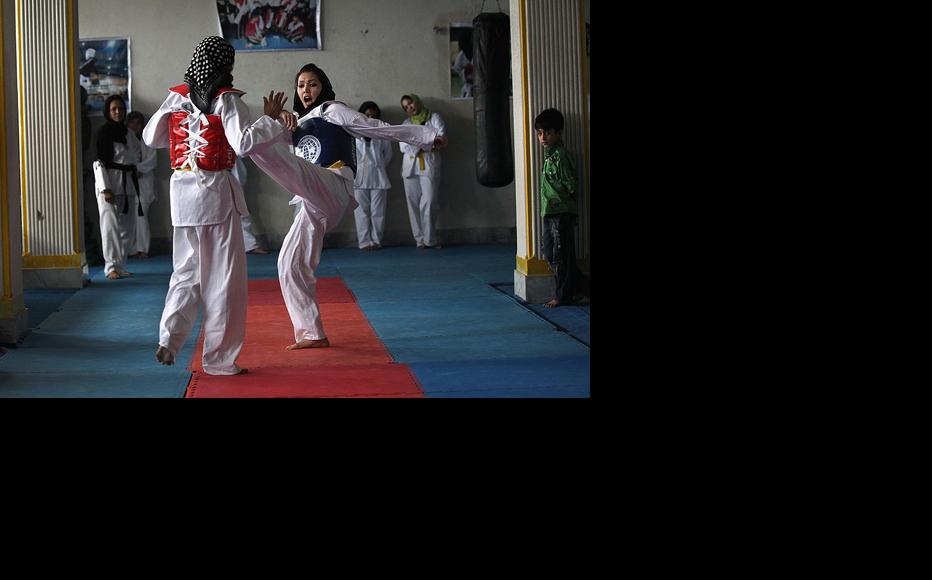 Afghan girls practice martial arts at a gym for women in Kabul. (Photo: John Moore/Getty Images)
The link has been copied

One of the first women to register for the course, taught in a sports hall at the department of women’s affairs by female trainers, Razaqi practiced faithfully for four months. Taunts and abuse from the public did not deter her from pursuing her new passion.

“Many girls and women, including me, were threatened on our way to practice [and told to] to give up sports, but we continued because of our passion.”

Then, one night, armed men broke into the women’s affairs department, broke the windows of the sports hall and destroyed its equipment. After that, no one dared continue.

“Although the security officials were told about this incident, no one did anything,” Razaqi said. “And we still can’t take part in any sports.”

Female participation in the Afghan sports scene has grown massively since the fall of the Taleban in 2001.

There is government provision for women’s athletics in many cities, and Afghanistan’s female competitors have brought home numerous medals from regional and international tournaments.

But conservative traditions continue to deem exercise to be damaging to women’s moral and physical health, limiting opportunities for many amateur enthusiasts such as Razaqi.

In Parwan province, north of the capital Kabul, officials say that attempts to introduce sporting events for women have met with one obstacle after another.

Sayed Hassamuddin Sadat, head of the Parwan sports department, said that the province had 18 men-only sporting federations, but no provision for women.

“We tried a few times to create a sports federation for women, but we have not been able to start one due to security threats, social problems, families not allowing their daughters to take part and not having a suitable venue,” he said.

Nadera Gayah, head of Parwan’s department of women’s affairs, agreed that the lack of resources combined with popular prejudice had been hard to overcome.

“In addition to having spoken with a few donor organisations about an indoor sports hall for women, we are trying to work with men so that they understand how important sports is for women and girls,” she said.

There is one spot in Charikar, known as Gul Ghondi Hill, where some daring women have started jogging.

Policemen patrol the area daily, but the runners say that they still feel uneasy.

Parwan provincial council member Hosi Bayan, goes running there regularly on medical advice as a way of reducing her cholesterol.

She said that had talked to the municipality about the UN Habitat agency building an indoor sports hall with the assistance of World Bank.

In the meantime, Gul Ghondi Hill is her only option.

“The doctor has advised me to exercise [but] I couldn’t find anywhere in Parwan to take regular exercise. So I come to Gul Ghondi Hill and jog. Even here, I don’t feel safe.”

Parwan police chief Mohammad Zaman Mamozi noted that his men were already monitoring Gul Ghondi Hill “to ensure that no one teases or bothers” the female joggers there.

While cultural sensitivities might hinder aspiring sportswomen, he said, the police were ready to support women and girls who wanted to take part in these activities.

“We have not received any complaints or proposals from girls or any organisation in regards to who or what is preventing girls from engaging in sports,” he said, adding, “We are ready to solve any kind of security problems.”

But fear of abuse is a key factor even among more liberal-minded members of society.

Shafiullah, an undergraduate studying Dari literature at Parwan university, said that taking exercise was just as important for women as it was for men.

His family currently did not allow his two sisters to take part in sports because of the lack of facilities and fear of harassment.

“If the conditions were better, we would never prevent them,” Shafiullah said.

Religious experts note that there is no restriction against women’s participation in sports as long as some Islamic requirements are met.

“If women do sports wearing Islamic hijab in a suitable place out of men’s sight, and if their trainer is female, there is no prohibition against it in Islam,” said Mawlawi Zmarai Qani, a leading Parwan scholar.

Yet even during their school years, girls have few opportunities to take physical exercise.

Zinat, a 17-year-old student at Charikar’s Hera Jalali High School, uses the playground to play a very basic version of volleyball with her friends. She said there is no possibility of ever getting access to a properly equipped sports ground.

“I am very interested in playing volleyball in a proper field with real equipment, with the chance to participate in national and international games, but I know that I’ll never be able to fulfill my dream.”

Hera Jalali head teacher Zarmina Mirzada said that hundreds of her other pupils wanted to play sports but had been stymied due to a lack of facilities.

“The students at our school are interested in having access to a safe place and sports equipment at school. Although we have been in touch with the Parwan sports department, they have not paid any attention to our request. They didn’t even visit the girls at our school.”

Sadat said such accusations were unfair.

“We are interested in providing sports opportunities for girls, whether inside or outside school, but we are restricted due to a lack of financial resources.”

“What have girls got to do with sports or competitions? Women should stay home and do their chores and attend to their responsibilities as mothers,” he said. “Sports and such other activities are just excuses which make women act in an immoral way. Forget these things.”