Numbers of female officers have grown, despite social prejudice.

Numbers of female officers have grown, despite social prejudice. 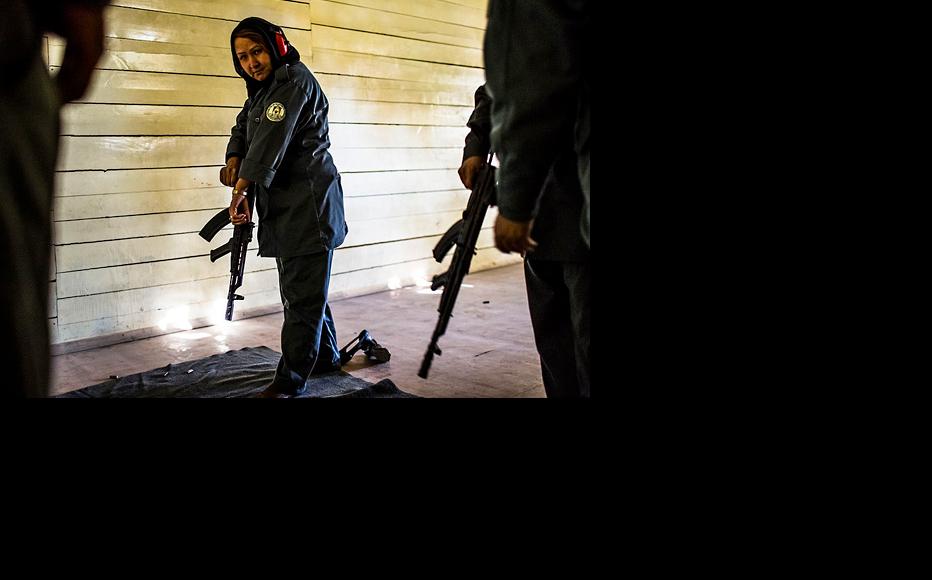 Afghan National Police cadet during target practice at the shooting range of the Kabul Police Academy. (Photo: Daniel Berehulak/Getty Images)
The link has been copied

A crowd of women are queuing at the entrance to the department of women’s affairs in Panjshir province, on their way to attend a workshop on gender violence.

Before they can enter, 32-year-old policewoman Zarmina checks each one. She conducts a painstaking search, even down to looking inside each woman’s shoes.

Zarmina has been with the Panjshir police department for the past three years.

"At first, my husband did not allow me,” she said. “He said if I became a policewoman, he would lose his honour. Later, when our [financial situation] became worse, he brought me to the police headquarters himself and enrolled me in the police."

Now, she earns more than 200 US dollars a month and finds her job extremely satisfying, even helping in investigate a number of criminal cases.

Zarmina explained that women played a vital role in security work, not least because of Afghanistan’s strict separation of the sexes.

"In one case, a woman involved in a murder refused to surrender herself to the policemen,” she said. “When I approached her, she surrendered very easily."

Officials at Panjshir police headquarters report a steady rise in the number of female officers applying to work with the force.

Two years ago, there were only two policewomen in the whole of the province.

"We cannot use men to search women in our traditional society,” he said. “For this reason, the enemy often uses female clothing as a disguise so as to carry out terrorist activities. The presence of policewomen is also essential in investigating criminal cases where the suspect is a woman.”

He acknowledged that women made up a tiny minority  - his force is currently made up of 1,114 officers – but noted that the trend was encouraging.

Najib Danish, the deputy spokesman of the ministry of the interior, said that conservative traditions remained major obstacles in recruiting women to the police.

He said that there were 3,500 policewomen employed across the country, but that at least 10,000 were needed. Efforts were underway to step up recruitment.

"Policewomen present a real headache for our country’s enemies,” he explained. “The insurgents are worried about their increasing number, because their most violent attacks, which they carry out in women's clothing, are more likely to be discovered by policewomen. A female presence at the checkpoints and in searching women in criminal cases is highly valuable."

In Panjshir, Alia Atai, the director of women's affairs, said that their office was running a campaign via mosques, schools, and religious scholars to raise public awareness about the need for female officers.

Quite apart from benefits to national security, she said that joining the police represented an excellent economic opportunity for women, especially those who were struggling to provide for their families.

"We are happy that women can shrug off the ridicule that their relatives sometimes subject them to,” she said. “One widowed woman told us that when she ate, her brother would say bad things to her and taunt her for eating for free. Today, that woman is a policewoman, has a salary and feeds herself from the proceeds of her own hard work."

Gul Andam is one of those whose new career has given her both self-respect and a steady income. After she lost her husband a year ago, she joined the ranks of the police as a way of supporting  her family.

At the moment, she is responsible for searching women at the entrance to the Panjshir police headquarters.

"I carry out my work with great enthusiasm,” she said. “I have respect and credibility, and also a good salary and I can look after my family. I also serve my people and my country. What can be better than this?"

Andam said that she saw herself as a public servant and would be happy to work anywhere in Afghanistan. She had seen for herself the difference female police officers could make to a case.

"A girl in the Manjor valley of the Bazarak area of Panjshir had run away from home,” she recalled. “We went to bring her to the department of women's affairs so her family would not harm her. She was not ready to get in the car when policemen tried, but when I told her not to worry as I would be with her, she calmed down and got in the car."

She added, "In most criminal cases, female suspects do not tell policemen the truth, but when we talk to them they tell us everything and it helps the police solve the cases more easily."

Islamic experts say that that there should be no obstacle to women joining the police force, if certain strictures on modesty and dress are adhered too.

"Policewomen should have the Shariah-based hijab,” explained religious scholar Mawlawi Gulzar. “Their accommodation and activities should be separate [from men] and they should not be in contact with policemen. They should also not mingle with men while performing their duties.”

But others have a more positive attitude.

Mohammad Shah Azimi, a resident of Panjshir’s Shotol district, said that he believed most people agree that it was important to recruit women to the ranks of the police.

"I do not have a young girl in my family, but if I did, I would have enrolled her to become a policewoman, because it serves society. Women do well at investigating criminal cases; women accused of crimes are happier to share their secrets with policewomen rather than with policemen."

And despite the difficulties, young women are continuing to pursue this career choice.

Zarifa, 24, is a high school graduate in the process of applying to the police.

"Everyone in our family works in the military,” she explained, “and so I would like to be a policewoman. My family has given me permission and… I want to be a police officer. I want to serve my society this way."