The power vacuum in the neighbouring state has Tajik analysts worried.

The power vacuum in the neighbouring state has Tajik analysts worried. 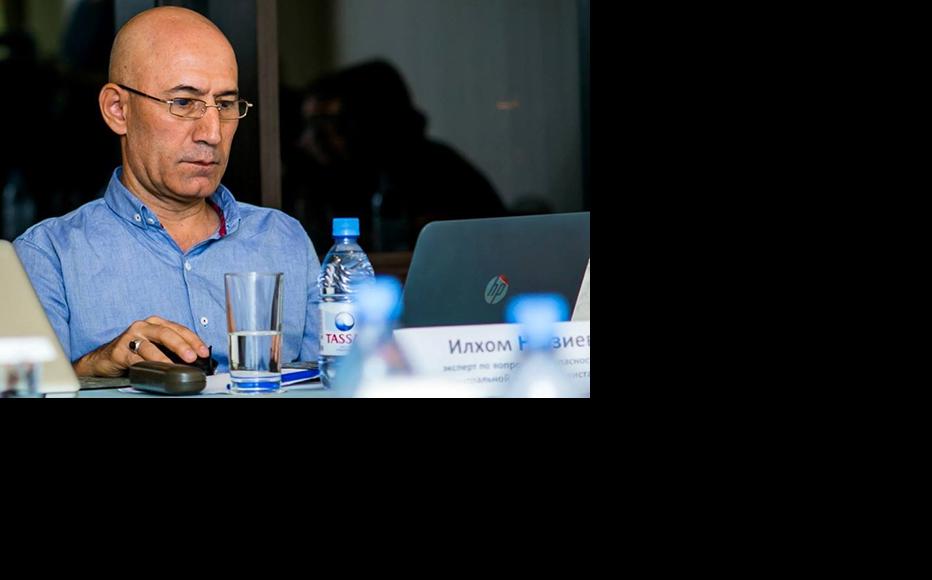 Tajikistan shares a highly permeable 1,300-kilometre border with Afghanistan and has long struggled to combat drug smuggling and the threat posed by Islamist militants.

The 2014 withdrawal of Nato forces from Afghanistan, leaving behind a small contingent of US troops, has further weakened Kabul’s control in the regions.

Amid a deteriorating security situation in Afghanistan, IWPR spoke to Ilkhom Nazriev, a Tajik journalist and documentary film-maker who is one of the country’s leading experts on Afghanistan, on the current cross-border threats.

IWPR: Security in neighbouring Afghanistan is important for Tajikistan. However, the situation is deteriorating rapidly. Judging by media reports, security in the neighbouring northern provinces - Kunduz and Badakhshan, is particular bad. How do you assess the current situation?

Ilkhom Nazriev: It is very difficult to say who controls Afghanistan now. One thing I can say for sure, there is a state of constant fighting in 25 out of the country’s 34 provinces. The authorities have offices in the centre of the provinces, but the countryside is largely given over to multiple armed groups that prey on the population, recruiting locals and attacking the government as well as international organisations. In Afghanistan, the situation becomes more complicated every day; it’s chaos.

When they were in power, the radical Islamic Taleban movement could be divided into two main groups. The group led by Mullah Omar, the founder and spiritual, military and political leader of the movement, was oriented to Pakistani intelligence and had close ties with the religious and political groups of Pakistan, primarily with two factions of Jamiyati Ulamoi Islamii Pakistan. The second group was led by Mullah Muhammad Rabbani, chairman of the government of the Islamic Emirate of Afghanistan – the title the Taleban created for themselves - and was supported by some Middle Eastern states, primarily Saudi Arabia.

Mullah Omar was always resident in Kandahar and there is no recorded evidence of his participation in the movement’s events in Kabul. In the late 1990s, amid rumours of a conflict between Saudi and Mullah Omar over Osama bin Laden, whom the Taleban leader refused to extradite to Riyadh, Mullah Rabbani fled to Saudi Arabia, allegedly for medical treatment, and nothing was known about him after in Afghanistan.

In July 2015, after the death of Mullah Omar, Mullah Ahtar Mansur declared himself the successor. Some of the leaders of the movement, including the closest relatives of Omar - his son and brother - refused to accept Mullah Ahtar Mansur’s leadership and even accused him of being involved in Omar’s death. Mullah Rasul led the opposition towards Mullah Ahtar Mansur.

A year later, at the end of May 2016, the United States declared that Akhtar Mansur had been eliminated in the Pakistani province of Balochistan, by the Afghan border. Khaybatullah Okhunzoda was elected to lead the group. Several public statements were made on his behalf. It was during Okhunzoda’s rule that the Taleban leaders expressed their desire to unite. The leader of the Haqqani terrorist network, Sirodzhuddin Haqqani, and the son of Mullah Omar, Mullah Jakub, were announced as deputies of Khaybatullah Okhunzoda. But since then, neither Okhunzoda nor other leaders have spoken publicly; it is not known whether they are alive or not.

There is also no information about the leader of the Taleban opposition, Mullah Rasul. According to the Pakistani media, he disappeared in March 2016 after visiting Pakistan. Since then, there have been no addresses from him in the region’s social networks or media. Instead, Mullah Mannan Niyazi has addressed the public on behalf of the dissenting group of the Taleban. His armed groups are active mainly in the western provinces of Afghanistan.

Today, the Afghan state security forces refer to the armed groups operating in the country as “muholifini davlat" (enemies of the government) or “guruhoi gairi masul” (uncontrolled groups). In every district of the provinces one can find armed groups consisting of several dozen people or as many as several hundred. All these groups operate under different banners.

What is the situation on the border with Tajikistan now? Is there a threat that militants will migrate from Afghanistan?

Over the past few years, the situation in the provinces bordering Tajikistan, Uzbekistan and Turkmenistan in the north of Afghanistan has become particularly serious. In Badakhshan province [bordering Tajikistan], anti-government armed groups have been in full control for more than two years over two strategically important districts, Vardudj and Jamgan. They are also present in more than ten districts of the province. Local Afghans are at the core of these armed groups, with Afghans from the southern and south-eastern provinces, as well as citizens of Pakistan and the Central Asian republics. Most militants call themselves Taleban or fighters of the Islamic Emirate of Afghanistan. There are groups that act together with the Taleban under the banner of the Ansarullah group, which is made up of Tajik citizens. There were attempts by some groups to declare themselves representatives of the Islamic State (IS). It is noteworthy that some operations against government forces in the Badakhshan province are jointly conducted by these groups. They try to keep [certain] districts, resources and mines under their control.

The most difficult situation is in the province of Takhar, neighbouring Badakhshan and Tajikistan. For more than two months, the province has had no governor. Its former head, Yasin Ziya, unexpectedly resigned at the end of May and left the province, and a new one has not yet been appointed. Afghan experts predict the situation in Takhar will deteriorate during the summer and autumn of 2017. They assess the situation in Ishkamish, Darqad, Hvodjagor, Baharak, Khawadjah Bahavodin, Chahi Ab, Dashti Kala and Bangi to be even more complex. Regular murders of civilians, theft, kidnapping and other crimes take place on a regular basis in the remote areas away from the district centres. A mass migration of people has been reported. The main reason for the destabilisation of the province is the strengthening of various armed organisations in most of its districts.

Citing the Afghan ministry of internal affairs, local analysts note the active presence of the Taleban, al-Qaeda, Hizb-ut-Tahrir and the Islamic Movement of Uzbekistan in this area. In addition, the situation is complicated by the presence of 94 different armed groups in the province, with 1,130 members. Various local clan leaders most often head these groups.

Are IS fighters present in Afghanistan?

The appearance of IS in Afghanistan was noted in early 2015. The militants of the Islamic Movement of Uzbekistan, who were expelled from Pakistan along with their families, appeared in the southern provinces of Afghanistan. It was their leaders who first publicly announced that they were swearing allegiance to the leader of IS, al-Baghdadi. Later, IS fighters appeared in the east of Afghanistan, but they were from the local youth. The students of Jalalabad university participated in a rally in Nangarhar waving IS flags. Today the presence of IS has expanded to the northern provinces of Afghanistan. According to Afghan sources, armed groups operating under the IS flag are present in some districts of Saripul, Faryab and Jowzjan provinces in the northwest of the country and in the districts of Badakhshan, Takhar and Kunduz provinces in the northeast of Afghanistan, which directly border Tajikistan.

The task of the NATO forces deployed in Afghanistan was to assist the Afghan authorities in ensuring security. How did they cope with their task?

The 16-year presence of the forces of the international coalition led by the United States brought neither peace nor calm to this long-suffering country. Moreover, the situation keeps deteriorating, and the representatives of the international coalition do not now even promise any improvement. They say that things will get worse and worse. Over 16 years, the coalition failed to create a government that would be recognised by the majority of the population. The current, so-called “unity” government of national consensus, which many Afghan politicians call “the government of [former secretary of state] John Kerry”, has been incapacitated due to internal disagreements.

The United States and its allies acknowledged that they began to reduce their presence too early and sent several thousand troops to the country. But Afghans are sceptical. What could not have been achieved by a 100,00 force in its time cannot be achieve by several thousand foreign soldiers.

There are increasing fears of Afghanistan turning into a second Syria or Iraq. The intensification of the rivalry between the US and Russia in Afghanistan could launch this scenario. Each of the powers will begin to support one of the sides of the conflict; this will lead to war on an even greater scale, with possible expansion to a regional level.

How dangerous is the situation for Tajikistan and is the threat greater now than before?

The lack of control along the Afghan border has led to the rise of organised crime groups smuggling drugs and weapons. For example, over the past two years, the number of armed attempts to cross Tajikistan's state border have increased. Tajik border guards have to engage in clashes with armed smugglers more often.

The actions of militants also damage economic ties between the two states. In mid-July, in clashes between Afghan government forces and militants near the settlement of Puli-Kandahori in Kunduz province, the power transmission line tower was damaged. This line supplies electricity from Tajikistan to Afghanistan. As a result, part of the Afghan capital was left without electricity. The Tajik energy holding Barki Tojik said it would resume electricity supplies to Afghanistan as soon as the transmission towers were repaired. A representative of Afghanistan’s energy company, Di Afghanistan Breshna Sherqat, reported that there was still ongoing fighting in the area of the damaged tower [and negotiations were ongoing with Uzbekistan about increasing the electricity supply from there].

Militants often block the main highways, preventing the free movement of people and cargo. Thus, due to the threats of militants on the road from the port of Shergan-Bandar on the border with Tajikistan to Kunduz and further to the south of Afghanistan, the volume of the goods transported from Tajikistan has recently sharply declined.

Tajikistan and other Central Asian states lose huge opportunities because of the situation in Afghanistan. Recently, at a meeting of the heads of the states and government participating in the CASA-100 [power generation] project in Dushanbe, exact data was presented – as the project is not yet implemented, parties to the project lose 50 million US dollars a year. There are dozens of such common projects whose implementation would help to solve the most important socio-economic problems of the region.

Tajik experts closely monitor developments in the neighbouring country. Their common opinion among them that peace will not be achieved in Afghanistan until the interests of all military-political and ethnic groups are taken into account. All the activities that have been conducted so far under the auspices of peace talks have not taken into account these internal and external factors and therefore were doomed to failure. And since these groups are connected to external actors, it is necessary to include representatives of these third parties into the peace process.

The peacebuilding plan in Afghanistan should be carried out under the auspices of the United Nations with the mediation and under the guarantees of the United States, Russia, China and the countries of the region, as it was in Tajikistan during the civil war of 1992-1997. I believe that the scheme used in Tajikistan can be adapted and used to stabilise the situation in this neighbouring country.

Tajikistan, Afghanistan
Crisis
Connect with us