Questions raised as to whether it will even be possible to vote in some districts.

Questions raised as to whether it will even be possible to vote in some districts. 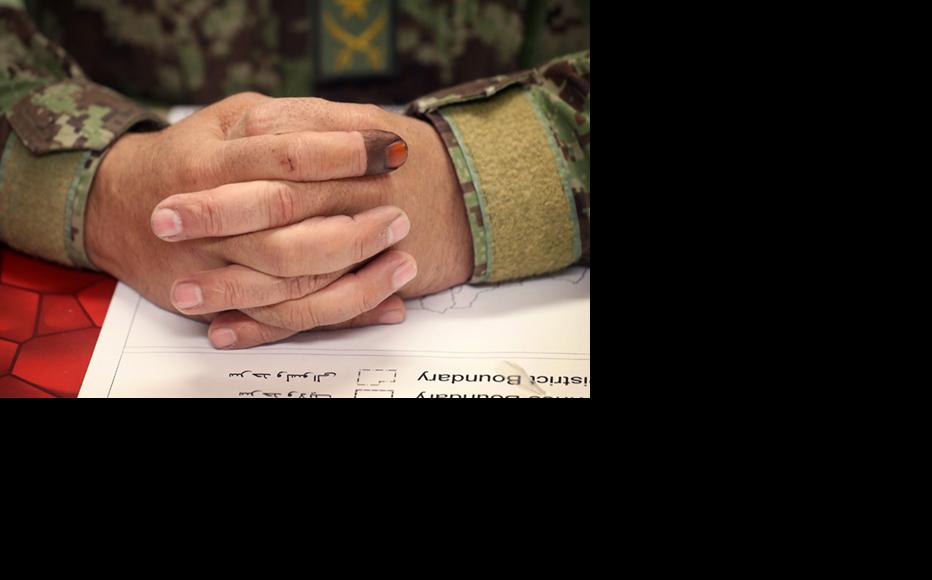 Ink stains the finger of an Afghan soldier, proof that he voted. (Photo: Scott Olson/Getty Images)
The link has been copied

Candidates running for parliamentary and district council seats in Afghanistan’s southern Helmand province are warning that a lack of security is threatening the entire process.

According to a number of local candidates, only four districts are totally under government control - Greshk, Nadali, Nawa and Gramsir - with others so dominated by insurgent groups that there is no chance of elections being held there.

These include Musa Qala, Kajaki, Baaghran and Nawzad as well as the southern districts of Khanashin and Dishu. Of Helmand’s remaining districts, only parts remain under government control, with the rest ruled by the Taleban.

Parliamentary candidate Aqa Mohammad Quraishi said that people were particularly skeptical about the value of the October elections due to a lack of security, intimidation by local strongmen and a lack of transparency.

“As a candidate, I am also concerned about those other candidates who break the law and rules about completion,” he said.

Quraishi cast doubt on the likelihood of elections going ahead even in the four districts the government said it had secured.

“I think the insurgents are trying to destabilise these four districts too,” he concluded.

Ali Ahmad Darwesh, another parliamentary candidate, said that a concerted security operation was needed to encourage local people to go out and vote.

“If they have no peace of mind, even residents of the capital Lash Kargah will not participate in great numbers, let alone those in other districts,” he said, noting that security concerns had already restricted candidates’ ability to campaign.

To participate in the elections, citizens have to register their identity cards, receiving a sticker to show that they are entitled to vote. Parliamentary candidate Rahmatullah Afzaly noted that this had been exploited by insurgents to identify and intimidate prospective voters.

“People have been beaten and threatened because of the stickers on their ID cards,” he said. “If there is no security, how they will dare come to the election centres to cast their votes? I think the upcoming election will be fraudulent.”

Security challenges have thus far overshadowed issues of fraud, a persistent part of previous elections.  But some are warning that the lack of security will enable cheating on a massive scale.

“Lack of security is a concern for us, but it will serve to benefit the powerbrokers,” said parliamentary candidate Jan Mohammad Shirzad. “If there is no security there will be no transparency in the elections and this will lead to corruption. Powerful groups will use their supporters to fill ballot boxes or pay people to do so because there will be no proper monitoring. These people will ultimately win the elections.”

Officials have tried to assuage these concerns, explaining that a synchronised security plan will be rolled out across the country.

Mirza Mohammad Haqparast, assistant to the spokesman of the Independent Election Commission (IEC) told IWPR that elsewhere Afghanistan there were also polling stations in areas outside government control or faced with a high threat level.

Across the country, the IEC was coordinating with Afghan forces to step up security at all polling stations identified as vulnerable, he continued.

“According to the Afghan constitution, all security organs are obliged to work with the IEC on security issues and to eliminate any threats to ensure the elections are implemented with full confidence and security,” Haqparast said.

Helmand police press officer Mohammad Zaman Hamdard also said that a comprehensive security programme had been designed for the election period, including measures to protect candidates.

“All forces in Helmand province are committed to provide security at any time. Special plans have been made to ensure security during the election process at the central and provincial level, but [dedicated] military operations will be conducted in those areas where there is the need,” he said.

“All security officials have been given plans and tasked to provide security within their cities and districts during the elections. They will also attend follow-up meetings to make sure that voters can go to polling stations and cast their votes without fear,” Hamdard concluded.

Omar Zwak, spokesman of the governor of Helmand, said that the security plans would be expanded ahead of the October vote.

“The security forces will try to ensure security in other districts too, so that more people can participate in the elections,” he said.

But others are not convinced by these assurances.

“We can still hear gunfire from areas of Lash Kargah city,” he continued. “The Baba Jee area, located in district four of Lash Kargah, is still out of the government’s control, so we’re worried about just how elections will take place here, or that it might come at the cost of people’s lives.”

Even those who are determined to turn out on election day say that they need further security guarantees.

Lash Kargah resident Sardar Wali insisted that elections were important for Afghanistan, but added, “I will cast my vote, but I need to be sure that there are no security problems.”

“My family and I will take part in the elections,” explained Abdul Khaleq, who lives in Nawa district. “We are tired of war, we have lost relatives, so we will vote to end the war. We hope our new candidates will work for us, we are tired of our old parliament members.”

He said, however, that he also needed more reassurance regarding security, continuing, “I will risk my life to cast my vote if it can help rebuild my country, but it’s not acceptable that our security forces are negligent and don’t fulfil their duties properly.”