Recent thaw in relations between Khartoum and South Sudan could be reversed without rapid territorial solution for contested region.

Recent thaw in relations between Khartoum and South Sudan could be reversed without rapid territorial solution for contested region. 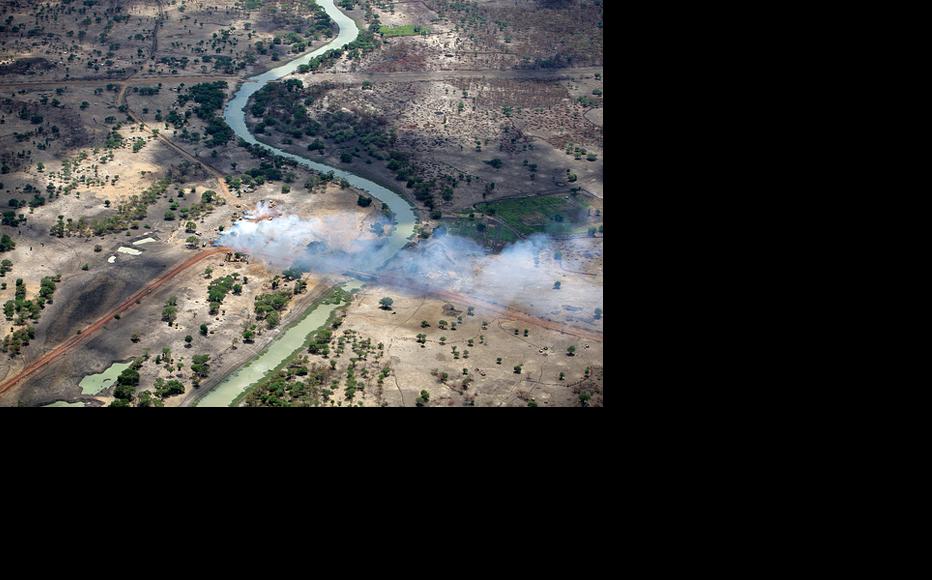 Sudan risks further conflict if claims over the disputed region of Abyei are not resolved. (Photo: UN Photo/Stuart Price)
The link has been copied

Despite the landmark agreements which Sudan and South Sudan reached late last month, experts are warning that failure to quickly resolve a lingering dispute over the oil-rich border region of Abyei could still bring the two countries to the brink of conflict.

Sudan’s president Omar al-Bashir and his South Sudanese counterpart Salva Kiir signed a series of agreements in the Ethiopian capital Addis Ababa on September 27, including commitments on security on their common border, and cooperation on oil production, trade, cross-border movement and banking. Mediated by the African Union, the deal was the product of three weeks of negotiations.

The two countries have undergone a difficult divorce since South Sudan seceded in July 2011 following a 20-year civil war between the north and south. Disputes over border demarcation and oil exports have threatened to drag both states back to war.

September’s agreements should see oil start flowing again in the coming months. South Sudan shut off the taps in January due to a disagreement over transit fees. The 2011 split saw South Sudan retain one-third of the region’s oil fields but it still relies on pipelines and other infrastructure north of the border to get its oil to market.

Meanwhile, the security agreement envisages a ten-kilometre buffer zone on either side of the frontier.

Fierce fighting broke out along the border in April this year when South Sudan’s army seized one of Khartoum’s oil fields in the Heglig area. Sudanese retaliation created fears of a return to all-out war.

Both countries were threatened with United Nations sanctions unless they reached an agreement designed to prevent further conflict.

Despite the deals penned on September 27, there has been little progress on deciding which country can rightfully claim the Abyei region. Analysts warn this threatens the accords already signed.

While the two governments dispute ownership of Abyei’s oil reserves, relations are tense on the ground between the two main groups with a stake in the region – the Sudanese Misseriya tribe and the Ngok Dinka people of South Sudan.

The Ngok Dinka reside in Abyei while the Misseriya migrate seasonally through the area and have grazing rights there for their cattle. The failure to agree a solution at government level has prompted fears of renewed conflict at any time.

Ernst Jan Hogendoorn of the Brussels-based think tank International Crisis Group told IWPR that Khartoum and Juba had “kicked the really hard issues down the road, and the challenge is that these hard issues could unravel the agreements that have already been made. One of those issues is Abyei.”

On returning to their respective capitals, Kiir and Bashir were given heroes' welcomes by hordes of placard-carrying supporters, mostly drawn from the two countries' ruling parties, the Sudan People's Liberation Movement in the south, and the National Congress Party, NCP, in Khartoum.

In Sudan, both government-owned media and the few private broadcasters welcomed what Bashir called a "historic agreement".

If fully implemented, the deal is expected to have a positive economic impact on both sides of the border as well as provide a measure of security and stability to both nations.

Having lost two-thirds of overall oil production to South Sudan, Khartoum has been under heavy financial pressure in recent months. Austerity measures imposed as a result have brought people onto the streets to protest against Bashir’s government.

The South Sudanese government gets 98 per cent of its revenue from oil, so the prospect of reopening the pipelines will provide a much-needed boost to the economy.

Supporters of the Khartoum government have been keen to emphasise that the September 27 agreements will have a positive impact for Abyei, as well. Some say that if the agreement is implemented, Abyei will cease to be a problem, since the proposed demilitarised frontier zone will still allow the Misseriya nomads to move across freely.

Speaking on Sudanese TV on October 2, Khartoum-based commentator Abdulmalik al-Naim said that once the security arrangements are in place, they will "take Abyei out of the equation and it will no longer be a cause for strife between the two countries".

However, analysts on the region, as well as Misseriya representatives, are less optimistic.

In an interview for IWPR, the chief of the Misseriya tribe made it clear that his people were not willing to compromise on their grazing rights, which they fear losing if Abyei becomes a recognised part of South Sudan.

“Under no circumstances will the Misseriya accept giving up their ancestral lands to the Ngok Dinka or anyone else," Mukhtar Babu Nimir said.

The Misseriya tribe, which is of Arab origin, lives primarily in South Kordofan province and parts of Darfur, but is also found across western Sudan.

Hussein Jalal, a senior figure in the Misseriya and a former political officer at the British embassy in Khartoum, was equally clear about the tribe’s attitude to Abyei.

"Abyei is a red line, and whoever crosses that line will be dealt with," he told IWPR.

Meanwhile, the Ngok Dinka enjoy support in South Sudan and reject any solution that would see them yield control of Abyei. The supreme chief of the Ngok Dinka, Kuwal Deng Majok, has repeatedly stated that his people “will not give an inch” of territory there.

Unless Khartoum and Juba push for an agreement on Abyei, analysts are concerned that the dispute could undermine progress they have achieved on other issues. But it is unclear whether the two leaderships can solve the issue on their own.

The border as it was demarcated when Sudan became independent in 1956 is seen as the starting point for negotiations, but this principle is not supported by residents of the region.

“While there have been many technical discussions as to where the 1956 border lies, and to some degree there is at least official agreement on much of that border, what that fails to appreciate is that the official positions are not necessarily shared by local populations that live in these areas,” said Hogendoorn. “What you have is local populations that have historic claims to areas which are across the border and which will not be met by any kind of official deal.”

Hamid Osman, who heads the Omdurman Free Thought Discussions Forum, a think tank, warns that the Abyei dispute, left unresolved, could lead to conflict on a much larger scale than the recent fighting over Heglig.

"What the pro-NCP analysts are saying [that the September 27 agreement will resolve Abyei] sounds like an inverted case of the proverbial chicken-and-egg riddle," he said. "If the security arrangements are implemented, then the Misseriya tribe won't see Abyei as an issue of contention, but at the same time the same security deal cannot be executed since the Misseriya don't agree to its terms."

The terms of the peace agreement which north and south Sudan signed in 2005 to end years of conflict state that a referendum should be held in Abyei on its future status as part either of Sudan or of a post-independence South Sudan. However, the vote has been delayed as it has not been agreed who should be allowed to participate.

While Juba supports a referendum, Sudan opposes it and is in favour of a negotiated political solution. The African Union plans to bring the matter before the United Nations Security Council.

The Misseriya also reject the idea of a referendum, as they say it will be impossible to check which voters are legitimate and which are actually South Sudanese nationals. Chief Nimir says a referendum could spark all-out war between the two states.

"In the past, we used to be able to recognise the Ngok Dinka from markings on their skins and other methods, but now all Dinka look alike,” he said. “The Southerners would bring in millions of non-Abyei residents to vote, which we will not accept, and thus trouble is likely to occur.”

"For the young Misseriya warriors, it is best they don't get into frictions with the Ngok Dinka," Nimir added.

According to Nimir, the only way forward is to divide Abyei in two, with the Bahr el-Arab river as the border. Anything north of the river would be Misseriya territory, and the Ngok Dinka could have the lands to the south.

The South Sudan embassy in Khartoum rejected the Misseriya chief’s claim that a referendum would be undermined by importing voters.

"This is absolutely false, and Mukhtar Nimir knows very well that the nine tribes of the Ngok Dinka far outnumber the Misseriya,” Gabriel Deng Akot, spokesman for the South Sudanese embassy in Khartoum, said. “That's why he's afraid of the referendum."

Akot also questioned what he described as the Misseriya's "unfounded apprehension and fear" of becoming part of South Sudan.

"Why are the Misseriya afraid to join South Sudan?" he asked. "They have been moving with their livestock to the south since their forefathers' times and no ill deed has befallen them."

Akot also denied Nimir's allegation that it was impossible to recognise members of the Ngok Dinka group.

"They know very well each and every member of the Ngok Dinka and can even trace their line of ancestors," he said.

On October 8, Sudanese foreign ministry spokesman Al-Obeid Ahmed Marawah reiterated that Khartoum would prefer a political agreement as opposed to a referendum.