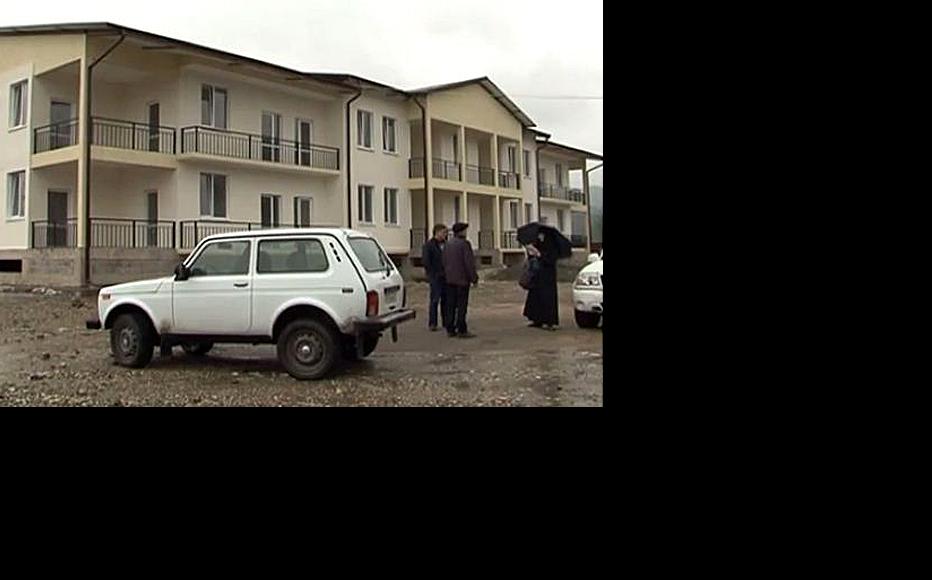 Houses in the village of Dranda built for Abkhaz refugees from Syria: (Photo: Nizfa Arshba)
The link has been copied

Several hundred ethnic Abkhaz from a community that has lived in Syria for the last 150 years have moved back to the Caucasus to seek refuge from the ongoing conflict.

Some 500 have arrived in Abkhazia since the Syrian uprising of 2011 escalated into full-scale civil war.

“Abkhaz people living in Syria are an inseparable part of the Abkhaz nation. Given the difficulties of developments in Syria, we cannot and must not ignore the problems faced by our brothers,” Vyacheslav Chirikba, Abkhazia’s foreign minister, said. “We hope that our brothers will feel that they have come home to their own land. The repatriation process is continuing, and in the last few days, we have received more than 100 applications to return to Abkhazia. We are preparing the relevant documents for our brothers from Syria to get Russian transit visas.”

The Syrian Abkhaz have had their travel and resettlement costs paid by the government’s Repatriation Fund. New apartment blocks have been built for them in Dranda, a village in the Gulripsh are southeast of the capital Sukhum.

“The process of repatriation and integration is very difficult,” President Alexander Ankvab said. “We want our brothers to return to their homeland, to live well here and to feel they are protected.”

A diaspora of Abkhaz and the related Circassians is spread across Turkey, Syria and neighbouring states. They are the descendants of hundreds of thousands of people from the northwest Caucasus driven out when Russia conquered the region in the 19th century. The exodus of “muhajirs” (emigrants), as they are known, peaked in the 1860s.

Since breaking with Tbilisi in the 1990s, the Abkhazian authorities have pursued a policy of inviting diaspora members to come and settle in their forebears’ homeland. All ethnic Abkhaz anywhere in the world are automatically entitled to citizenship.

The refugees are coming to an entity whose status remains disputed. Abkhazia has been run by a separate administration since a war with Georgian forces in the early 1990s. After the brief Russian-Georgian conflict of August 2008, Moscow recognised both Abkhazia and South Ossetia, another breakaway part of Georgia, as independent states. But apart from a handful of countries, the international community continues to regard both entities as sovereign Georgian territory.

Medea Turashvili, a researcher with the International Crisis Group based in the Georgian capital Tbilisi, argues that the current influx cannot be seen as a success for the Abkhazian authorities’ open-door policy.

“Immediately after the war in the 1990s, the [Abkhazian] government placed great hopes in the return of the muhajirs. Many families responded to the call, and as I recall, up to 3,000 people returned to Abkhazia, mainly from Turkey. But they were unable to fit in, and soon went back again,” she told IWPR. “At the moment, there’s a specific reason why people are returning – the intolerable conditions and crisis in Syria. People are seeking to save themselves. One therefore cannot exclude the possibility that the majority of settlers from Syria will go back as soon as the problems there are resolved.”

The number of refugees from Syria is too small to have an impact on Abkhazia’s demographic situation. A 2011 census showed that ethnic Abkhaz accounted for just 51 per cent of the population. Georgians, who fled from Abkhazia in their hundreds of thousands during the war of the early 1990s, still accounted for nearly a fifth of the population in 2011, with Armenians close behind, followed by Russians.

Giorgi Shaishmelashvili of Caucasian House, an NGO in Georgia, said the refugees would make little difference.

“The Abkhaz ethnic group has demographic problems, but accepting refugees from Syria isn’t going to solve them,” he said. “Abkhazia isn’t attracting the muhajirs because of the political and economic conditions there. The exodus of ethnic Abkhaz from Syria is motivated more by self-preservation.”

Abkhazia’s Repatriation Fund said that 1.5 million US dollars had been spent on the refugee assistance programme as of April this year. The scale of spending on a relatively small number of new arrivals has annoyed some people in Abkhazia,

“They are building them houses and spending big money – how is that possible?” asked Sukhum resident Alexander, 68. “Do we citizens of this country need help any less than they do? Don’t we and our children need houses, money, work and free medical care? You shouldn’t divide people – we [Abkhaz] are a single whole and we should all live by the same rules.”

Georgians driven out by the conflict two decades ago are furious at what they see as a way of denying them any chance of returning to their homes in Abkhazia.

Ira Chakaberia has not seen her house in the village of Achigvara (which Abkhaz call Achguara) for 20 years, but she still hopes to go back one day.

“I’m sure my Abkhazian neighbours – who I hope remember how well we used to get on – aren’t going to be delighted if my home gets taken over by refugees from Syria,” she said. “Worrying about refugees from Syria at a time when we [Georgians] are unable to return to our homes is just contemptuous.”

Paata Zakareishvili, the Georgian minister in charge of efforts to reassert control over Abkhazia reintegration, tried to calm concerns about the long-term effect of the Syrian influx.

“This isn’t the first wave from Syria, and some of those who came earlier have already gone back, since they found the environment alien. They don’t speak Abkhaz or Russian; they only know Arabic,” he said. “These people are being treated as refugees, so they are going to go back at some point.”

Natia Kuprashvili is an IWPR trained journalist and director of the Georgian Association of Regional Broadcasters. Nizfa Arshba is a freelance journalist in Abkhazia.