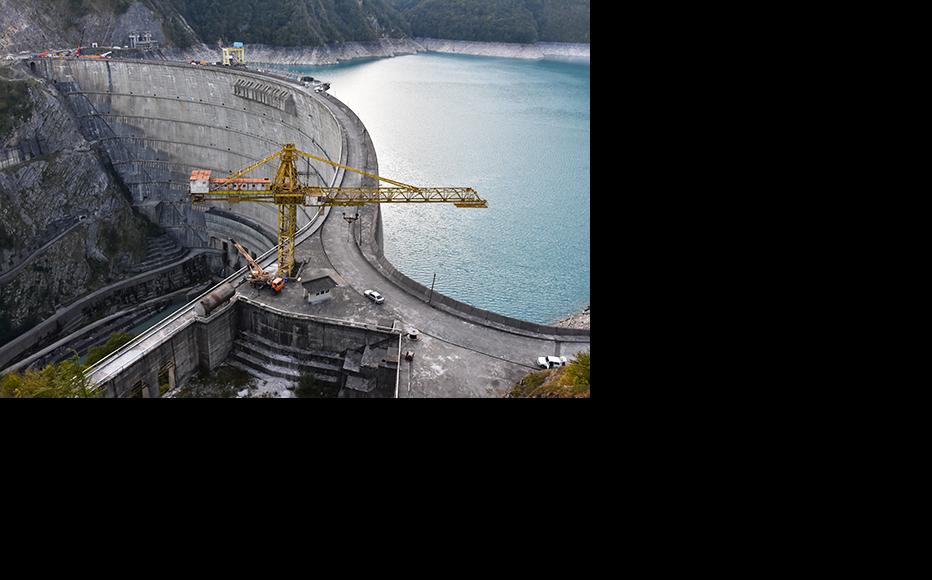 The Enguri Dam. (Photo: Tamuna Shonia)
The link has been copied

The upcoming three-month closure of Georgia’s Enguri hydropower plant for repairs will leave the breakaway territory of Abkhazia without a regular energy supply.

The plant accounts for all of Abkhazia’s supply and more than 35 per cent of the electricity used in territory controlled by Tbilisi.

The arch dam, reservoir and a part of the diversion tunnel are located on the Georgian side, while the hydro power plant building with four near-dam installations and the rest of the tunnel are in Abkhazia, in the village of Saberio.

The electricity generated by the HPP is shared by both sides. Officially, Georgia lost control over Enguri on September 30, 1993 after a war over Abkhazia’s declaration of independence.

An informal agreement was reached in 1997 according to which Abkhazia would receive 40 per cent of the electricity generated by the Enguri plant. However, consumption has exceeded this in recent years, especially during the winter months.

“Both sides need this plant but where Georgia has many other sources of electricity Abkhazia has no other sources to turn to,” said Levan Mebonia, 68, the chairman of the board of directors at Enguri who has worked there since it began operating in 1978. “This is our joint project, the facility we share and we both have to work as usual. We cooperate mostly with ethnic Abkhazian energy employees who work at the distribution network.”

Mebonia emphasised that Enguri guaranteed Georgia’s energy independence. However, he warned that growing electricity consumption in Abkhazia, attributed to the booming industry of crypto currency mining, could pose serious problems for the energy security of the rest of Georgia.

In addition, it was galling to many that the plant’s electricity was also consumed by Russian military bases located in Gali district. Six of these are located along the bank of the Enguri River, another one in the city of Gali and one more military base in the village of Okumi.

Abkazia had few options when it came to energy supplies, Mebonia continued.

“There is no gas there and therefore the consumption grows in winter,” he said. “But mostly it is increased because of the crypto currency farms, which are plenty. But, as they say, some restrictions are going to be enacted on this activity. When the water in the Enguri reservoir is drained, they will be cut off from the electricity and they understand this. Currently, Abkhazia receives electricity for free and the company loses revenue as a result. If we had sold this electricity, we would have received an additional 30 million GEL (nine million US dollars) a year. Now we are negotiating with them on a price, but so far we have not reached any results.

“We had a meeting a couple of days ago and they said that they were taking some measures to reduce consumption and we’ll see… right now they use two billion kilowatt hours a year,” said Melbonia, adding that this was ten to 15 per cent more than they should.

The diversion tunnel will be closed from the end of January until May for repairs estimated to cost 7.5 million dollars.

“In the meantime, for 95 days of repairs Abkhazia will be completely supplied from Russian alternative energy resources; two power transmission lines entering from Russia - one of 220 KW and another of 500 KW- will provide the electricity supplies,” Mebonia said. “I am not sure about the amount and regularity; there might be some short-term blackouts.”

Enguri technical director Gia Khubua said that the Abkhazian population paid one tetri per kWh, while for the rest of Georgia the tariff varies from 14 to 23 tetri, which amounts to between four and seven cents.

“They do not pay for power generation, they pay only for distribution,” Khubua said. “The fact is that the electricity tariff is abnormally low there. The political will is needed to increase the tariff. Until there is no electricity metering system in Abkhazia, the consumption of electricity will always be out of control. The share of the Russian military bases is very low; the consumption has grown because of the crypto currency mining. It is said that the use by mining farms reaches 70-90 megawatts, and this is the main reason for the recent rise in consumption.”

He stressed that of the nearly 1,000 workers no more than 20 were Abkhazian, mostly security and technical staff, and personal relations were good.

“But the implementation of the agreement is another thing, which is based on fairness and it must be kept, otherwise Enguri power station will face many difficulties, the solution of which might require different decisions,” he added.

Analyst Paata Zakareishvili said that when Tblisi had cut off power and gas to South Ossetia, Russia stepped in to supply it. There had been no serious discussion around permanently cutting off supplies in this case, not least because Enguri’s location made it inconceivable to leave Abkhazia without Georgian support.

He stressed that Georgia still bore political responsibility for Abkhazia, even though it no longer controlled it.

“If we consider Abkhazia as our territory, we have no right to cut off the power supply,” he said. “This is a hopeless situation where Georgia is obliged to fulfill its responsibilities. I understand that the power generated by the Enguri HPP is consumed by the occupying forces and it is a sad reality when there are no other options, no alternatives available, one clear decision is needed,” Zakareishvili continued.

“The Enguri HPP was built during the Soviet era in such a way that the dam is in the territory controlled by the Georgian side and the facilities generating electricity are in the occupied territory. And considering this, violation of the agreement will be damaging for both Abkhazians and Georgians.”

Giving Voice, Driving Change - from the Borderland to the Steppes
Georgia, Abkhazia
Life
Connect with us