Trainees learn how to report safely on conflict, and receive body armour kit to help them do that.

Trainees learn how to report safely on conflict, and receive body armour kit to help them do that. 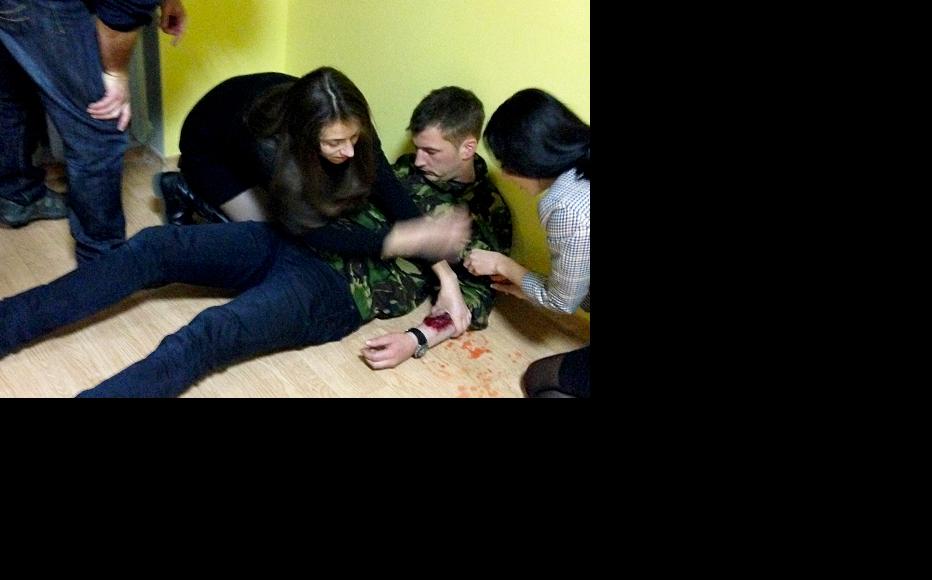 Ukrainian journalists in a simulation exercise, part of medical training delivered as part of IWPR's hostile environments course in November 2014. (Photo: IWPR)
The link has been copied

Ukrainian journalists face huge security risks as they report from the war zone in the east. Before last year, very few had encountered this kind of situation, so Russia’s annexation of Crimea and covert backing for rebels in east Ukraine have posed particular challenges to reporters.

After discussing the most urgent training needs with journalists in the country, IWPR came up with the Facts for Dialogue project, designed to encourage fair and balanced reporting and to improve protection for those in the conflict zone.

For this pilot project, funded by the National Endowment for Democracy, IWPR selected 20 journalists on the basis of their prior experience and of the likelihood that they would apply the skills they learned. In November, they received theoretical and practical training in surviving hostile environments, including first aid, and separate courses in digital security, war reporting, and ethical journalism.

“The need to do a risk assessment before a trip was a complete revelation to me,” one trainee said afterwards.

The hostile environment and first aid training was delivered by specialists from the UK and involved a lot of practical exercises, some conducted inside the classroom and some outside.

“They gave us an opportunity to do things ourselves, in situations that were very close to reality,” a participating journalist said.

Each participant was given a set of equipment consisting of a vest with high-quality armoured plates and a helmet – both marked “Press” and blue rather than military green – plus an emergency medical kit.

All of them have since reported that they regularly wear the body armour, although the medical kits have fortunately only been employed for minor injuries so far.

All agreed that what they had learned about planning for and negotiating hostile environments was vital.

“The knowledge I acquired during the training will help me in the war zone, and will probably save my life,” one reporter said.

Another added, “For the first time in my life, I have realised that we don’t need to be heroes. Previously, in high-adrenalin situations, I didn’t think about safety.”

The workshops on ethical journalism and the specifics of war reporting brought local reporters together with experts from Ukraine, Russia and Britain. The content was tailored specifically to the ongoing, fluid situation in the east, and to ensure that participants could discuss their concerns at length with the guest speakers.

“It not only gave us an opportunity to discuss how to behave and operate in dangerous situations, and to get tips and tricks from the trainers, but also to acquire some practical skills – and that’s very important,” one local journalist said.

Another course component covered digital security – how to protect the content of one’s computer and other devices from prying eyes, and how to communicate safely online.

“In my profession, given that I work in war and conflict zones, I am at great risk of having my digital information stolen,” one trainee said.

It can be difficult to pitch the level of this kind of training as people come to it with vastly different skills, but most felt the trainers struck the right balance with “clear and simple explanations on fairly complicated issues”, and covering “all the basic topics that are essential”.

Some of those who took part suggested ways of altering or expanding the subjects covered. The commonest recommendation was for a longer version of the hour-long session on post-traumatic stress disorder – how to help oneself and colleagues showing the symptoms. IWPR has taken this on board and incorporated it and other recommendations into the design of a proposed extension to this project.

Ukraine
Safety
Connect with us